Film critic Mick LaSalle was talking a few months back about what he considers the necessary ingredients to make a great movie, and what traits can identify a movie as a future ‘classic’. Most of the guidelines are pretty obvious– topicality, great acting, etc. But my favorite of this was the idea that a great movie is one that ends on a note of complexity. Not ambiguity, he explains, but something that unites the film’s themes and ideas into a poignant, resonating moment.

I mention this because it has to do with today’s movie– it would be odd if it didn’t, right? Aggie Appleby, Maker of Men is a smart, perceptive film on class relations that leaves just enough questions to make the ending either absolutely perfect or absolutely devastating depending on your point of view.

Let’s hit the beginning first and work our way back from there. Aggie (short for Agnes) is a waitress. She meets Red Branahan after he eagerly jumps in a fight to protect her virtue– a cause he only learns of afterward. Red is very much focused on getting through life the easy way, with his favorite past times including cheating, gambling, and getting into scuffles with police officers. 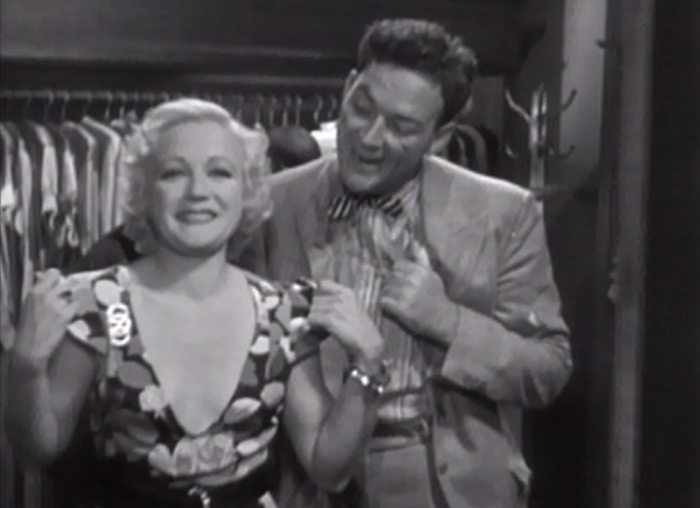 As it turns out, the police aren’t too fond of people who routinely beat them up for kicks, so Red is sent away to prison for an indefinite amount of time. Broke, kicked out of their flat, and with only her friend Sybby to turn to, Aggie is in dire straights until she wakes up after sneaking into an apartment to find Adonriam Schlump looking at her, stunned.

Adonriam is mostly referred to as a ‘sissy’ through the course of the movie, and his completely polite and utterly dull personality is a good hint as to why. The street smart Aggie decides to take him under her wing after she finds out that he’s so painfully nice and polite he’s losing out on job opportunities left and right– usually because his interviewing strategy involves copious amounts of apologizing for taking up their precious time.

Adonriam– or Schlumpy as he’s soon nicknamed– comes from a long line of famous and important rich men, but decided to try and make it on his own in New York. With Aggie’s help and by borrowing Red’s moniker, he’s hired on a construction crew and must learn to be tough to survive. 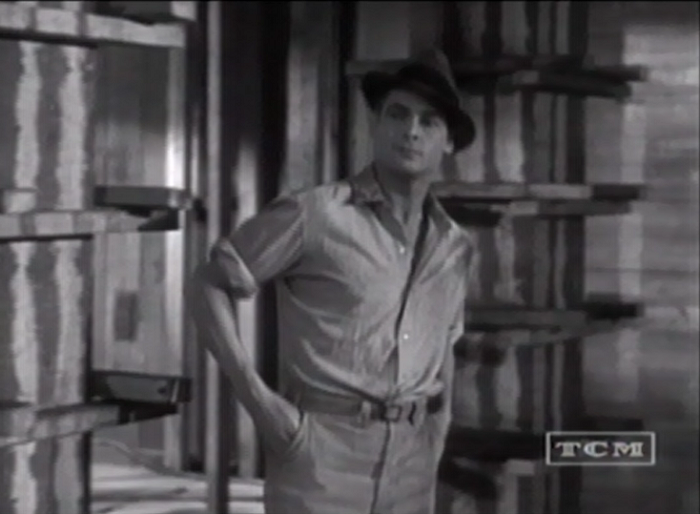 From zero to hero.

The day he comes home with a shiner is the day that Aggie realizes that her feelings for him have gone beyond maternal. Problem is that that’s also the day that his fussy Aunt Katherine and fiance Evangeline knock on the door, which just happens to be the same day that Red’s gotten out of jail (don’t look at me, look at the screenplay). Their social status once again thrown into sharp contrast, Aggie must decide whether to stick with her new creation or go back to her faithful old lug.

And the decision ain’t easy because choices like that just aren’t. Schlumpy and Aggie have connected somewhere deep, somewhere emotionally, that isn’t just the sexual excitement she gets from Branahan. Schlumpy’s learned to trust her, and she takes that responsibility seriously. But that difference issue comes up again– not only are they from different classes, but different backgrounds, with Aggie and Branahan being clearly of Irish blood. Closing this gap may be near impossible. 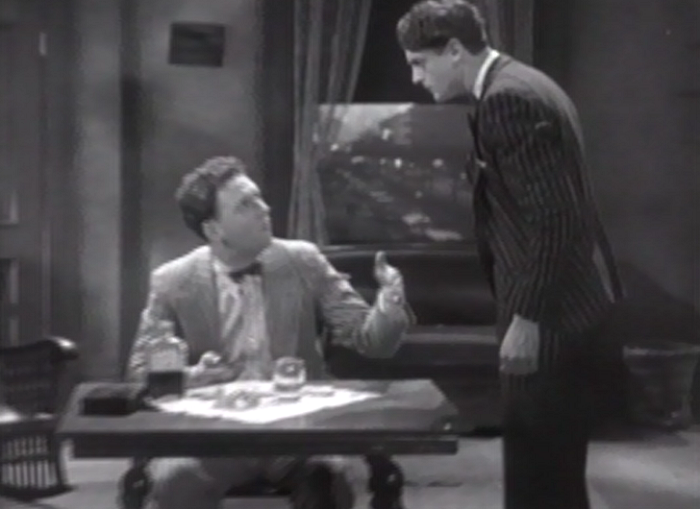 The two made men.

Surprisingly, the film closes not with Aggie transcending her class but by deciding to settle for Branahan. Schlumpy, meanwhile, hurt from Aggie’s rejection, fights Red and impresses Evangeline greatly. Aggie’s made him a man, though not a content one.

Aggie decides to reform Red the same way she did with Schlumpy, only in reverse– getting him a classy job and a respectable name. Aggie will probably feel the same pangs of Frankenstein-ian guilt with Red that she felt with Schlumpy– she wants someone sensitive and sweet, but also needs someone voracious and sexy. Like a lot of people, she’s willing to change others in hopes of finding it, but there’s little hope she’ll be satisfied. Aggie hasn’t learned her lesson before the last reel closes out– but there’s hope she might make Branahan into a better person too.

The cast is uniformly excellent. Charles Farrell’s transformation as Schlumpy is filled with shades of subtlety and nervous yearning. Wynne Gibson in the title role also gets a lot of good slang put across, as well as a good amount of melodramatics that hang softly around her shoulders. There’s also a great sexual edge to Betty Furness as Evangeline, a woman who didn’t know where to start with Schlumpy but likes the results she sees. Lastly, William Gargan plays Branahan with such a great playfully nasty gusto that he reminds me of a great many story about my distant relatives back in the days when they roamed Washington D.C., similarly looking for a brawl just for kicks. 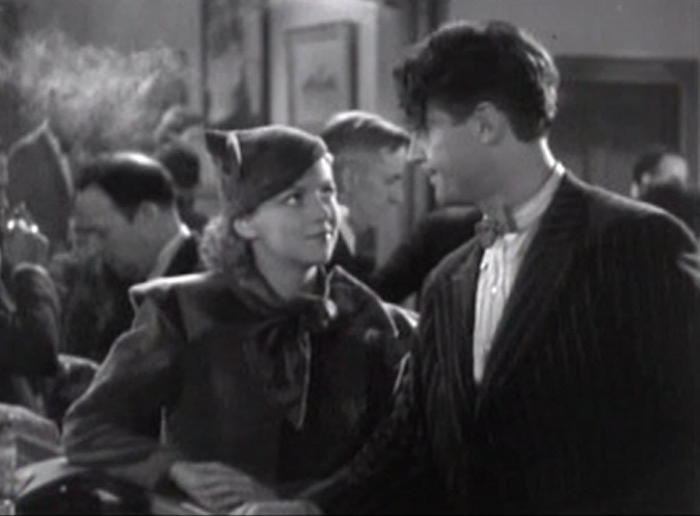 Her ladyhood is bloomin’.

Director Mark Sandrich (also behind a number of Wheeler and Woolsey comedies like Hips Hips Hooray! as well as The Gay Divorcee) revels in playing between exterior and interior space throughout the film. The film’s opening credits move from the elevated train above New York and across the windows of concerned tenants before putting us in the middle of a Branahan brawl. This kinetic energy carries over to the film’s other fight scenes, where masculinity and bravado wash the frame in colorful swaths.

Because that’s what Aggie is about, really. That tenuous balancing act of manhood between the brute and the romantic and how fine of a line it really is. It’s a frequently very funny movie, and its transition to drama in the last act is a solid, thoughtful one. Aggie ends with no solid solution to the questions of masculinity and desire, but a moment of determination. Aggie will make both the man she really wants and she really needs, and she’ll stop at nothing until she gets there.

Schlumpy! So glad you enjoyed this one as much as I did. You’re so right about Farrell, an actor I haven’t seen in a lot (yeah, by extension, I’ve got a lot of Janet Gaynor to watch yet), he was very impressive. This is one of those gems where I went in expecting nothing and finished up with another favorite.

Yeah, I’m glad it popped up since a commenter piqued my curiosity on it a while back. Well made stuff and pretty fun to boot. Thanks again for the DVD, Cliff!

This sounds fabulous! I always wanted to see Wynne Gibson in something besides bit parts (much as I love her in CITY STREETS, NIGHT AFTER NIGHT, and IF I HAD A MILLION). William Gargan gives me an opportunity to ask if you plan to cover THE STORY OF TEMPLE DRAKE any time soon — he plays the good guy in that triangle, a lawyer yet.

Thanks for these semiweekly treats — they get better and better!

Ha, thank you! And I’ll try penciling in Story of Temple Drake in for April– I just found the whole thing is on YouTube, so I have no excuse!

Hurrah! Excellent review of an almost-lost gem. The only critique I have is that you touch a little lightly on the premarital sex–as I remember it, there’s no talk of marriage and Aggie blithely lives in sin with these two men sequentially. Even for pre-code, it’s racy.

Here’s to hoping Aggie Appleby gets some 21st century distribution!

Good point! I added another bullet in to clarify. And, yes, here’s hoping Warner Archive gets that release into gear– more people definitely deserve to see it!

But there was alot of talk about marriage, Danny!
Schlumpy asked Agnes to marry him, which caused the proverbial Schlump to hit the fan in poor Aggie’s heart.
Aggie told Schlumpy she was married to Branahan to get rid of him, then only moments later the landlady walked in looking for her ‘husband’ to give him the receipt for the rent. This put the dots above the ‘I’s for Schlumpy, as Aggie pointed out the script like timing of the landlady’s intervention…
In the speakeasy Schlumpy told Red to get out, his wife wanted him, which didn’t go over very well with Red. And finally, Agnes who just might make Branahan into a Senator afterall, told him the only way she would stay would be if they married.

So while nobody was actually married there was a good deal of discussion about it. Personally, I was hoping for a happy ending with Agnes taking up with Schlumpy and Evangeline seducing Red just to get Aunt Katherine’s goat, but they didn’t ask my opinion.

Oh, by the way Danny, your description of the relationship between Schlumpy and Agnes is very perceptive, which is the real reason for my comment.

Ah, thank you for the clarification. My mistake. I hadn’t seen the film in many years when I made that observation. I like your summary. Although Aggie’s demand for marriage from Branahan points to a more conservative ending than I remembered, the rest of those references to marriage seem to me to emphasize the liberating ubiquity of the film’s out-of-wedlock sex. That is, in bringing up marriage, the film keeps reminding us that our protagonists are not.

One of the most interesting parts of the movie is how, as Danny put it, Aggie does not transcend her class at the end. It’s definitely no “Bowery Cinderella”! Classic Hollywood would NEVER have left her in the working class.

I wish I could rewatch it.

You might be able to download it here:
http://www.rarefilmm.com/2015/06/aggie-appleby-maker-of-men-1933.html
He has a couple of download options. As of late though, I’ve had better luck with the uncompressed versions. Don’t wait too long, he was talking about taking the site down but decided to leave it up for awhile. There are some interesting films there.

I felt that Agnes and Schlumpy had something genuine and profound. I would have liked to see them explore it and I don’t mean happy ending wedding bells. And I never realised Betty Furness could be so sexy! Red wouldn’t have known what hit him before she was through with him.

FANTASTIC! I can’t even begin to explain why this was so good. But it sure as hell was. When Aggie walked out into Schlumpy’s room in her black teddy, I laughed out loud! And she really did “make” a man out of Schlumpy, didn’t she? And at movie’s end, she was about to do the same to Red. Wow. Here’s hoping she can find happiness.

By happy coincidence, I watched Scarlet River not a week ago. Between this and that movie, I have become a huge fan of Betty Furness. That whole downturned head, upturned eyes thing….she embodies the word “smoldering.”