Golden Dawn: Subjugation with a Smile

“Has it ever occurred to you, Dawn, that your father might have been… a white man?”

Here’s the opening title from Golden Dawn, a 1930 film that reverberates with ugly racism: 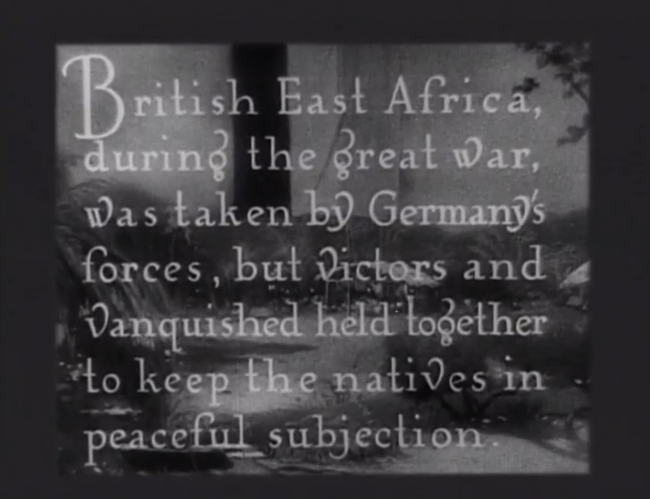 Based on an operetta and set at a remote East African outpost, Golden Dawn is the story of a white girl named Dawn (Vivienne Segal) raised by a black tribe and the white man (Watler Woolf) who loves her– but no one will let them get together since they think the white girl is just a pale skinned black. The local brutish slave runner, Shep Keyes (Noah Beery in terrible blackface), is all too happy to keep the lovers apart since that plays into his desires to rape the virginal Dawn. Boo, hiss. Keyes also switches between perfect English in singing to exaggerated dialect in dialogue, making the character doubly unappealing.

The British in the film are jovial lots, happy to keep the natives down and seeing their tendency for human sacrifice a necessary thing to let them do to keep their power over them. The natives– notably the only speaking ones are white actors in black face– are bound by what the witch doctor says, all too willing to fall for bullying or manipulation so long as Mobungu, their god, condones their actions. 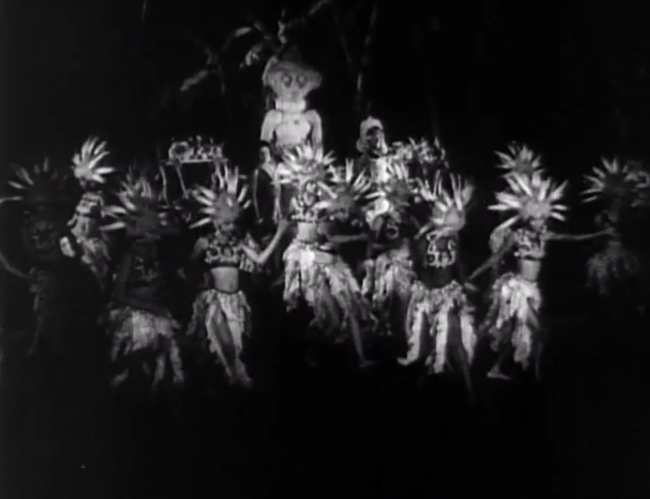 I think this Mobungu guy and I would get along.

So I’ve mentioned this several times before on the site, but it bears repeating– sound technology in the early 30s was crap at capturing high pitched singing. Which, of course, are what primarily comprise operettas, and made worse since the songs themselves are so dense with character feelings so if you can’t understand them, you’re missing about half the show. And, weirdly, when a character sings, everyone else sits around and watches them do so– odd since they’re expressing heartfelt feelings so intimately and then you have characters nodding and smiling nearby. A hallmark of stage operettas, it doesn’t work well here, adding another layer of falseness onto a mess of white adventure myths too knotty to fully untangle.

The only songs worth a damn come from the film’s supporting cast of comedic characters, which make up about half the cast. These include Lupino Lane as an amazingly skilled dancer and the pairing of Marion Byron and Lee Moran as a mismatched couple who clearly are both missing something the other wants. Luckily, someone has the foresight of putting the best part of the film on YouTube. No regrettable racial politics here, just good old fashioned rough sexual desires expressed through song and an Apache dance:

As well as racist, the film has a problem with misogyny. I know, shocking. The black woman who raised Dawn, Mooda (Alice Gentle), is revealed to have stolen the child from a white man that she was in love with and then had her married to Mobungu to keep her away from all other men– cue evil laugh. Shep has no problem with what Mobungu wants, which is probably why when he gets tossed on a funeral pyre at the end, the drought that had been plaguing the film’s third act finally lifts.

The movie, unsurprisingly for a 1930 film, is mostly medium shots and pretty leaden ones at that. Stock footage of a real African village is poorly matched with the backlot, and most musical numbers are left to linger on the screen so that the audience doesn’t have to worry about any visual dynamism interrupting their naps. 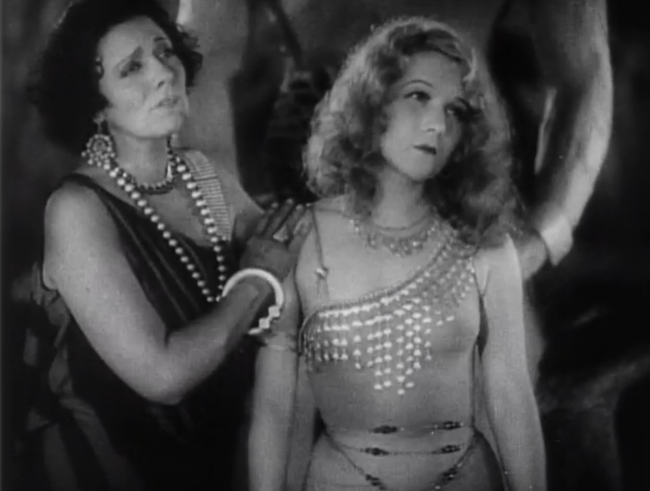 As excited as I am.

No one comes out rosy in the film, both by its clunky design and poor plotting. The film’s hero, Tom, is one of those foppish British adventurer types who we are told more about than demonstrated anything about. One character looks at him and nods,

“He has what the Americans would call ‘sex appeal’!”

Bah. Golden Dawn, outside of maybe five minutes of comedic subterfuge, is ripe for parody. It’s a damning reminder of the colonial arrogance that puffed up white countries less than a century ago, and how those presumptions led to so much ugliness since. It’s a time capsule of attitudes that still haunt us today– and should be extinguished with all due haste.

Dressing up all this pious racism with operetta songs only adds to the overall tastelessness, advancing Golden Dawn to a top roost in the Camp Riot sweepstakes. Obviously, the only public place something like this could be shown would be a school situation, or a venue where it could be preceded by a tall stack of disclaimers; I have African-American friends that I’m sure wouldn’t find it the least bit amusing. Then again, the PC practice of sweeping things like this under the rug needs to stop. Old movies with offensive racial content have almost disappeared from view. Hollywood shows like Golden Dawn have been out of sight and out of mind since at least the 1970s. If we want to understand where racism comes from, and why it remains in the cultural mainstream, bizarro evidence like Golden Dawn needs to be kept accessible.

Yikes, this sounds dreadful. I won’t be rushing out to track down a copy! Great review, though.

Very dreadful. And thank you!

Oscar Hammerstein was credited!!! Noah Berry looks as if he’s joined the Sister of Perpetual Indulgence. How come Mick LaSalle raves about pre-code? Must be the sex.

Being thoroughly racist is just ONE of its problems. it’s just a terrible movie, period. Bad songs, bad acting, bad writing. It’s a mess- but as I said to a friend, it’s FASCINATINGLY awful. Has to be seen to be believed. I just hope you knew of its reputation as one of the all-time bombs before you decided to watch it.

It’s a colossal trainwreck, for sure. And, sadly, I went into this one unawares after seeing it pop up on Warner Instant. Not a pleasant surprise by any means.

Truth be told this one is something I don’t even find so bad it’s good. It’s not Ed Wood kind of bad. It’s a very disturbing view. As a historical curio it might have some merit if you’re a film student (or perhaps in a Pan African Studies class looking at racism in film). Everyone else should stay far, far away.

It’s not something the midnight movie crowd would eat up, for sure, but you the number of blatantly offensive attitudes this movie espouses is fairly amusing. I don’t think anyone could make it through based on badness alone, though, but for people interested in the history of racism and really dumb, awful opinions, this movie is a bonanza.