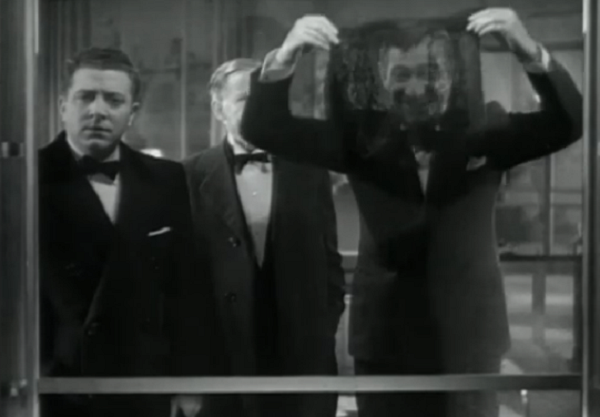 That’s the most interesting pair of doodads I’ve seen in a while.

Professional Sweetheart: Your Cake and Eating It, Too

I think the best way to start off this review is to immediately date it: have you ever heard of Lindsey Lohan? How about Vanessa Hudgens, Selena Gomez, or, heck, Annette Funicello? All Disney stars portrayed as virginal princesses who have, in one way or another, ‘gone bad’, even if it was just putting on a bikini and dancing with Frankie Avalon. 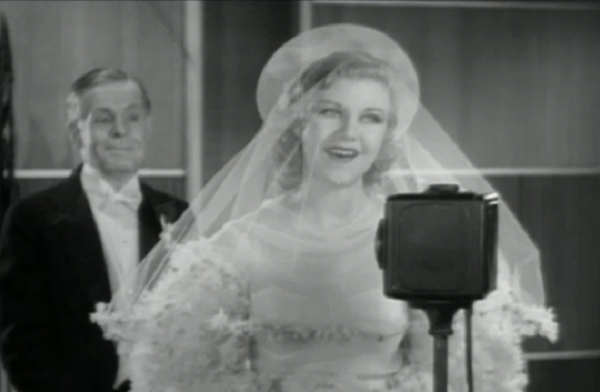 As pure as the driven snow. In public.

Rogers is Glory, a former orphan turned brat whose desires run at a 180 degree angle from her radio star personality as “America’s Purity Sweetheart”. She’s into dirty dancing, see-through garments, and spends every night voraciously trying to find a way to get a man to take her down to Harlem.

Her entourage must keep her from herself or risk damaging her sponsor’s brand, The Ipsy-Wipsy Wash Cloth Company. These include the company’s owner, Ipswich (Ratoff), a fey publicity coordinator, Childress (Pangborn), and an imaginative press agent named Speed (McHugh). They’re also trying to get her to sign a new contract, while their rivals over at the Kelsey Dish Rag Company (headed by Edward Kennedy and Allen Jenkins) vie for her endorsement, no matter how insufferable she may be off the air.

Speed pitches one idea that will satisfy a few of Glory’s more carnal urges: picking a random piece of fan mail and hooking the writer up as Glory’s new romantic beau. The entourage discourage her from her more luxurious choices (“I want a playboy. An international playboy. Every girl’s got one.”), and instead choose someone of ‘purest Anglo-Saxon blood’ who ‘got to be a virgin’, a backwards country hick from Kentucky with a penchant for bad poetry named Jim (Foster). 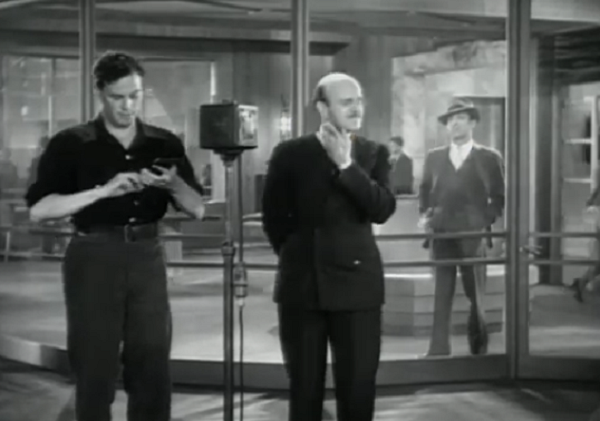 Wisely, this microphone is disconnected.

A battle ensues between Glory and Jim, as he buys into her public persona and she uses him as a negotiating ploy. When he discovers that she’s really a jazz baby who wants to ‘go to the devil’, he kidnaps her and takes her back to Kentucky, where a battle of wills, flesh, and slapstick violence rages on. A couple of exchanges:

In a fit of anger and panic, Jim knocks Glory out with one punch. As he freaks out, she uses the opportunity to feign weakness and get what she wants– and we’ll let a suggestive fade-out take over from there. 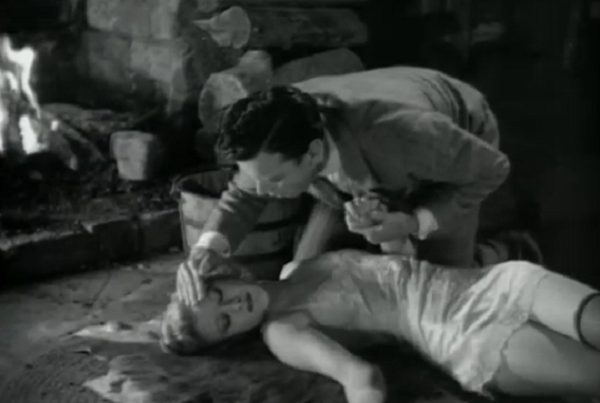 A woman’s business is apparently best done dressed like that.

Speed shows up the next morning to find that Glory has been, essentially, screwed into complacency. Now that her carnal urges have been satiated, she’s fine being a farmer’s wife and living out her life in service to him. Speed doesn’t believe her, though, and arranges for her to listen in to her usual program that evening.

Meanwhile, at his behest, Ipswich has decided to let Glory’s black maid, Vera (Harris) sing on the program. The threat isn’t just that they’ve promoted Glory’s maid to do her job, but that she’s black. Vera’s jazzy rendition of Glory’s saccharine sweet ballad is far different, leaving Jim down in Kentucky proclaiming it to be dirty and moving his hips in scintillating ways.

Besides reinforcing what a complete idiot Jim is, this serves to snap Glory out of her post-wedding night bliss. Through a complex series of silly negotiations, Jim is brought onto her show to read poetry and she has a new contract. As a result, the wash cloth and dish rag companies merge as well, creating the Ipsy Kelsey Clothies, a name so sweet it could make you vomit. The funny part about the ending: the two rival business chiefs seem more amicable and happy than the egotistical star and her caveman husband who got everything they demanded. 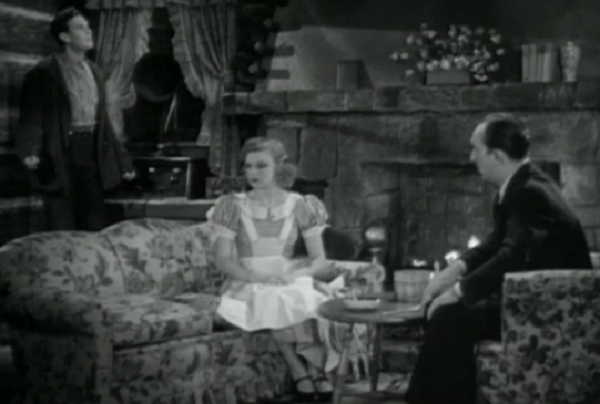 No, stay away from jazz! That’s the devil’s music.

The film has some of the weirdest racial currents you may get for the era, with Vera both being someone that Glory desperately wants to emulate but also loathes once she’s elevated to the same level as her. It might almost be an interesting commentary if the film was conscious of it at all, but, notably, Vera is missing from the tableau of smiling faces at the end. I guess America wasn’t ready for Vera’s brand of fire, and it’s to the film’s shame that we don’t find out what happened to her.

That being said, the film isn’t exactly a screed for white supremacy. Jim is presented as ‘the purest Anglo-Saxon’ in America, and is portrayed as someone whose intelligence hovers right around the same level as the dirt he farms. His sexual voracity, however, is remarkable (“You don’t kiss like you look!”) and, just like Vera’s sexy baritone and hip wiggling, seen as wholly desirable on a personal level. To a mass market, though, they’re rejected.

And that’s what Professional Sweetheart is about, of course: the prudish demands that Americans place on their performers, something that causes plenty of people plenty of trouble. It’s not just that they have to detest vice, be humble, and (at the time) be lily white in skin tone, but that any slip on this is viewed as a complete betrayal. In the end, the public gets what it wants, the corporations are happy, and Glory has toned down her schtick… though it seems obvious that that probably won’t last very long. 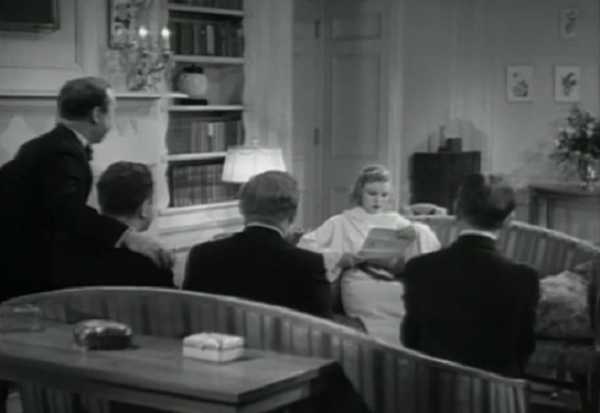 Much to the film’s benefit, it’s supporting cast is undeniably strong. This thing is filled to the brim with supporting stars from Warner Brothers, so much so that I was amazed not to see Guy Kibbee tottering about in the background. Zasu Pitts is a riot, with her reporter’s interview style essentially forming one brainless monologue. All of the film’s many comic supporting actors are working double time to make the film as silly as Professional Sweetheart be as silly as it can possibly be.

Professional Sweetheart is an odd monstrosity, one of those comedies that has nothing nice to say about anybody. Men are idiots, hicks are stupid, women are egomaniacs, black people are trying to steal our jobs, and corporations are run by hysterical ninnies. And the point seems to be that it’s all thanks to you– all those wonderful people listening to their radios out there in the dark.

They signed Rogers to a three-picture deal at $1,600 a week. Oddly, they weren’t that impressed with her singing. For the only time in her career,she was dubbed. The real singer of “My Imaginary Sweetheart” was Etta Moten, a black singer who had soloed impressively on “Remember My Forgotten Man” in Gold Diggers of 1933. It was the only real gripe Rogers had about making Professional Sweetheart. Regarding her dubbing, she wrote (in her autobiography Ginger My Story), “I was amazed and annoyed. I had been singing professionally on the stage and screen for years and thought it ridiculous to hear someone else’s voice coming out of my mouth.” 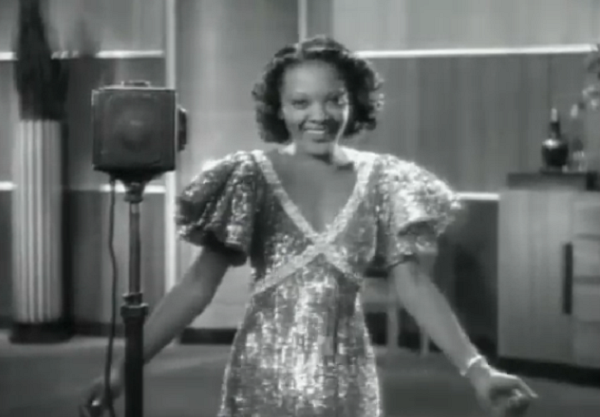 So long, Vera, you deserved better than this.

Given all the talent in front of the camera, Professional Sweetheart is inevitably less than the sum of its parts, but it’s such a good-natured whirlwind of exuberant irreverence that it’s hard not to be amused.

Danny, you always getting me interested in seeing the movie reviewed, and then it’s a matter of how to find it. Sadly, I don’t get cable and have TCM. It’s the only cable channel I wanted, and the cable company wouldn’t give me service with just one channel, and I couldn’t stand buying all those others I didn’t want. I do have Warner Instant Archive and Classic Flix.

Sorry man. I was in the same boat until TCM Watch came along, and, luckily, my parents subscribe to cable and gave me their password. There may be ways online to find others who are willing to share. In the meantime, plenty of other sources to choose from too, and I’ll choose from all of ’em!

JamesWHarris, I found it on a site Danny used for a recent posting, rarefilmm.com!

I can’t believe that Gregory Ratoff is called Sam Ipswich – after my home town. What a great name.

Ha, that’s pretty funny. I’m always on the look out to references to my hometown as well, but people usually prefer the nearby (and much more heavily populated) Peoria, IL.

One of my favorite movies. Great cast !

I discovered your site recently and I enjoy it very much. I don’t always agree but oh well. I do want to point out an error in the text of Professional Sweetheart though. Kelsey of Kelsey Dish Rags is played by the great Slow Burn himself, Edgar Kennedy, and not Edward Arnold.

As far as poor Vera goes, I made up my own ending. By the time those bozos got their contracts straight, all of Harlem was listening to her! She got a radio contract, a record contract and was doing a warm up show for Cab Calloway, Minnie the Moocher and the Reefer Man!

Oh, duh. Fixed. Thank you! And I like your ending better too!