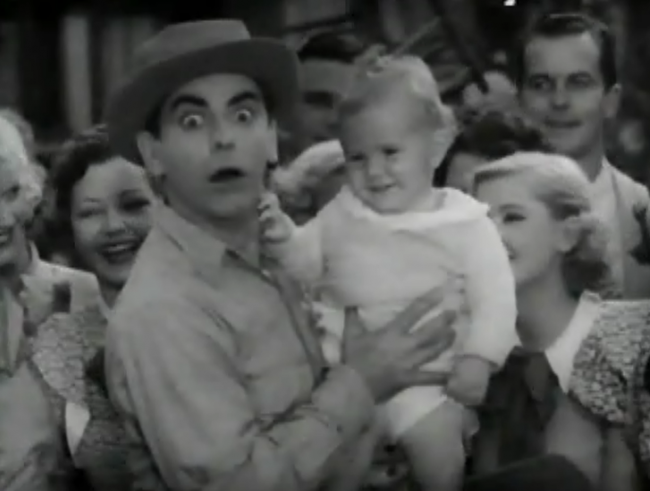 I have the same facial reaction whenever I find out some monster has put coconut on my brownie. 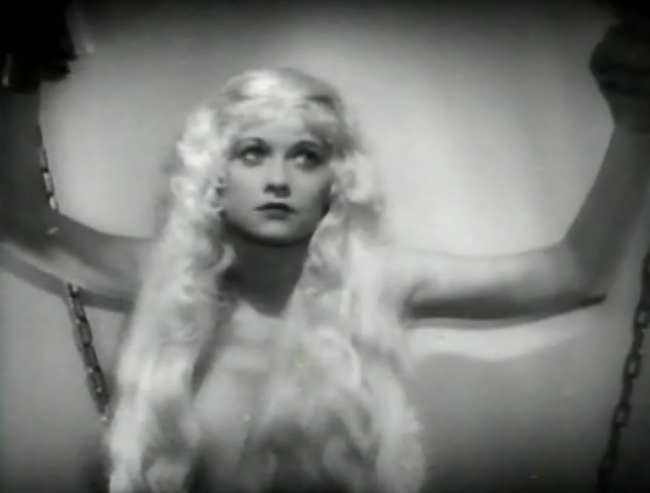 Eddie Cantor has never really been my cup of tea. If you think I’m exaggerating, you can check out my Kid From Spain or Whoopee! review. Cantor was a big box office draw in the early thirties, both on Broadway and on the screen. His films often slip into trainwrecks of overblown inanity, and, because Cantor’s fondness and fame for blacking up always factor in, the movies are pretty offensive too.

Well, in Roman Scandals, the jokes are better, the songs are better, the action is better, and the direction looks like it was done by someone at least half alive. Yes, Cantor still busts out the old greasepaint, but, eh, the is the least offensive of his outings so far. (Important note: this is not a defense of black face, it is still horrible.) 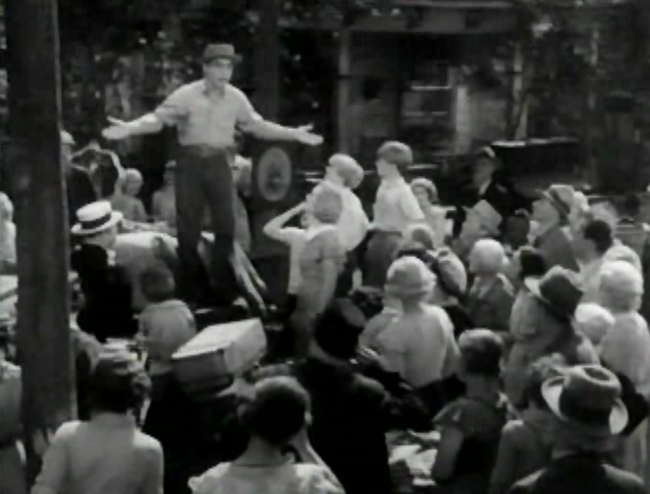 The plot kicks off with Eddie playing ‘Eddie’, a young, nice guy bum in the town of West Rome who unfortunately can’t make enough money to afford his own place. So he spends his nights at the Roman museum built by the town’s banker, Warren Finley Cooper (Willard Robertson). Cooper is in cahoots with the mayor and chief of police to systemically revitalize the town by getting rid of all the poor people and then pocketing the difference by underbidding on contracts, which, as you can imagine, probably wouldn’t sit too well with the populace. Their latest scheme involves kicking out a whole neighborhood to level the block and build a new jail. When the police chief notes that they don’t need a new jail, Cooper winks at him and assures him that he’ll find a way to fill it. Modern California was built on this entire ethos!

This leads to the movie’s first number, where Eddie encourages all of the people forced on the street by the corrupt officials to turn the street into their new home. He warbles the rather lovely, “Build a Little Home” and soon the whole town is in on it, incensing Cooper and getting Eddie walked to the town’s border and thrown out. As Eddie is walking away from his home, he suddenly finds himself avoiding chariots instead of cars. That’s right, he’s whisked himself away to Ancient Rome and is instantly caught up in the titular scandals. 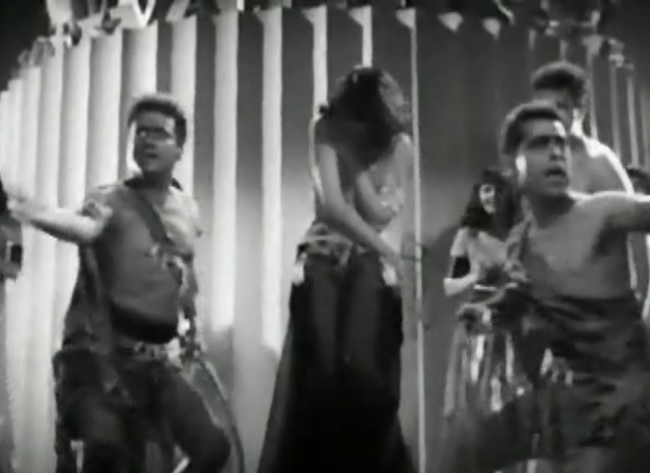 Probably one of the most sex slave filled movies I’ve watched in a while.

This leads to the usual Cantor mishmash of sly, dopey jokes, and bombastic musical numbers, this time mixed with very serious men wearing skirts. The first we meet, after an array of Roman archers try and use Eddie for target practice, is the harsh Josephius, played by David Manners as a character stroking his coiled whip with a little too much intensity for the family audience at home. Eddie is quickly taken to the slave market which, as choreographed by Busby Berkeley in his last major outing before sticking to Warner Brothers full time, is an enormous sexual tragedy full of grief, horror, and undulating nude women. So it’s not all bad, I guess.

That’s set to the tune of “No More Love” and sung by Ruth Etting. Etting was a pretty famous warbler who got shoehorned into a couple of movies around this time– see also Hips Hips Hooray— and this is probably the shoehornediest. Her character of Olga was the Emperor Valerius’ main hookup, but they misunderstood him and sold her into slavery. There’s no consequences, she’s brought back to him off screen. Later, she helps the Princess Sylvia (Gloria Stuart), escape, much to the joy of Eddie and Josephius. The two men have become friends despite both having a thing for her. 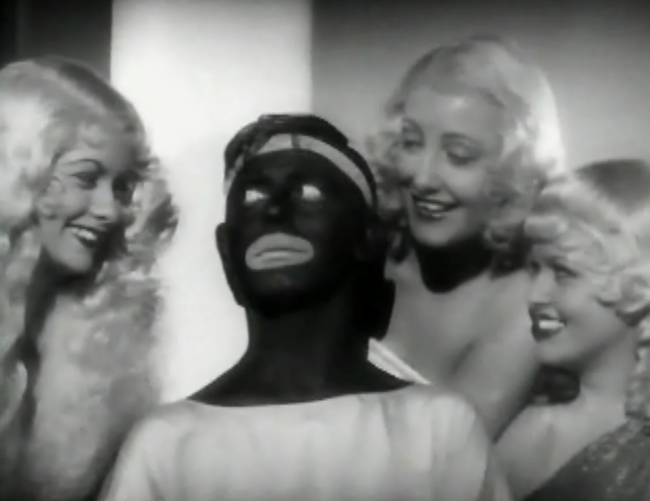 There are many digressions I’ve skipped over, such as Eddie escaping prison thanks to huffing ‘lava gas’, becoming the emperor’s food taster (the position has a high turnover rate), and basically making fun of Valerius and his minions (including a rather stuffy/funny majordomo played by Alan Mowbry). Empress Agrippa (Verree Teasdale) has also been trying to seduce Cantor, unsuccessfully to a surprising degree.

The best part of the picture probably comes in the “Keep Young and Beautiful” number– and it’s most uncouthly un-PC to boot. First, the good, which is Berkeley going all out with gorgeous women in various states of undress and a truly catchy (and deeply sexist) song about the joys of being a good looking young woman. The scene is elaborately choreographed, between the nymphish Goldwyn Girls twirling about in revealing states of undress. They twirl along with their servants– unsurprisingly, Nubian women dressed modestly and helping the Girls get ‘young and beautiful’.

The simple act of separately categorizing them is inherently unpalatable, emphasizing white beauty and black servitude in stark terms. Berkeley even goes one further, separating the two sets of women for the lengthy number and using their contrasting skin color to emphasize compositions and give the film an impressive visual mix of contrasts, also built against white and black revolving walls as well as a spectacular compartmentalized shower in the middle of the room. 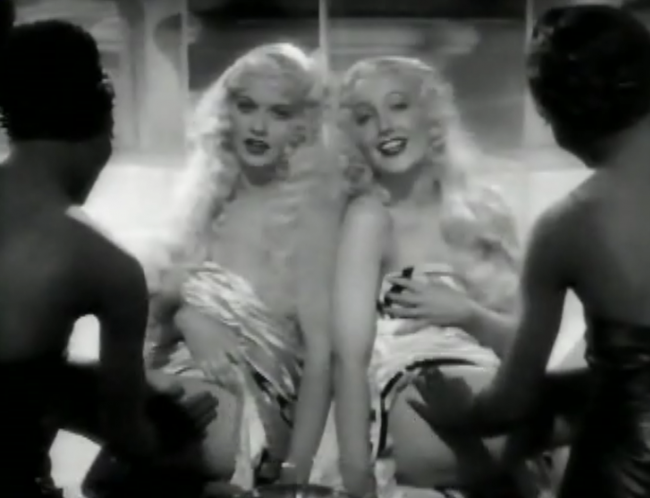 While this is happening, Eddie has disguised himself in black face so he can sneak around the nubile women. A common Cantor trope, for certain (Cantor’s appearance as his younger self in The Will Rogers Story (1954) is, in fact, done entirely in black face to hide his age), and while we’re not treated to a whole lot of racial ugliness (relatively), it again reveals how Hollywood desexualized the black man– an Ethopian beauty expert is allowed in the women’s baths since he’d be no threat at all.

If you can get past that (and I’m certainly not going to make you), there’s a lot to like in Roman Scandals, including Eddie’s glib and euphemism laced wisecracks and some impressive looking sets. The film ends with a chariot race which I’ve seen described as ‘spectacular’ and I’d just say more or less passes the time. It shows Eddie, with his shoes actually nailed to the floor of the chariot, being pursued by the emperor’s archers.

(The version of the movie I caught also seemed to be missing a sequence before the chariot chase wherein he escapes Valerius’ guards after Olga goes to free him. I saw no other reference to this scene missing in other reviews, so perhaps Etting simply skipped out on that day? Who knows.) 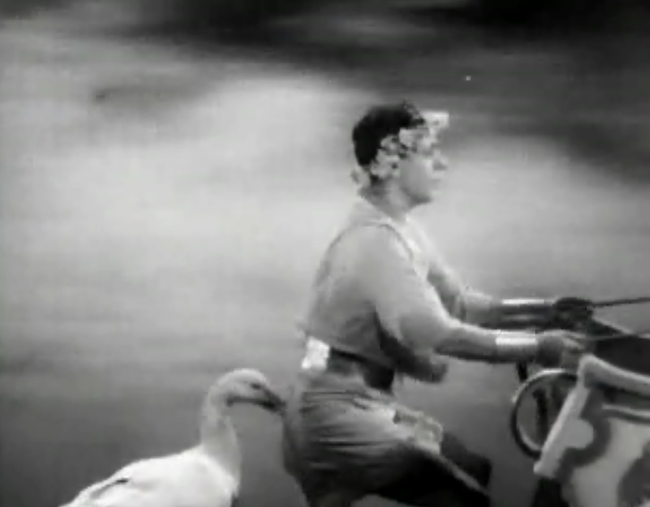 Roman Scandals is pretty dopey on a couple of levels. Let’s be honest, outdoor Rome probably doesn’t resemble Southern California quite as much as this movie would have you believe, and, as noted above, the racial politics are pretty much everything bad about the 30s in one solid package.

But it also is about how government corruption has been as constant through human history as love and romance. The movie is a weird mix of being a Capra-esque paean to small town hope and ingenuity, a bawdy satire of mankind’s decadent past, and a lavish mad musical. It’s charming in its way. 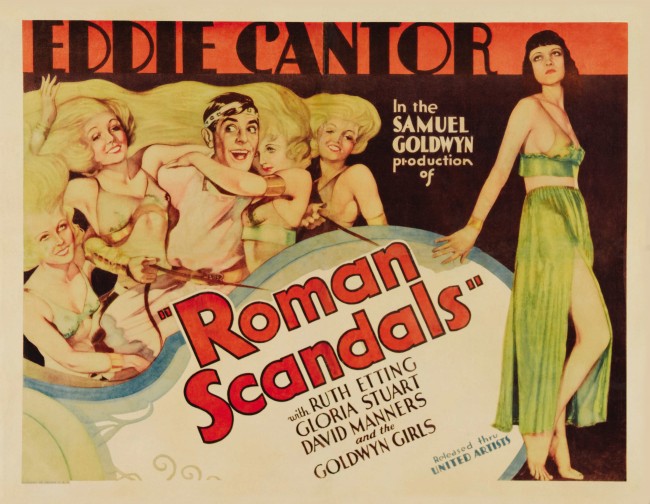 This movie has all the good taste of a gladiator fight. Fortunately, my tastes aren’t much better. By all means, bring on the bread and circuses!