Babes in the Wood: A Murder Most Fun

Say what you will about Walt Disney the man (and we’ll all say things, that’s for sure), there’s little doubt that the Disney Studios has produced some impressive work in their eight decades of existence. It’s early 30s product was among its finest– and among the least focused on Happy Meal toy promotions, for sure.

Two little children wander in the roads until they come upon a gnome village and decide to join in the insanity– er, fun. When a witch appears, they assume that this will just be a continuation of a good time, especially once they see her house made of candy and sweets. But when they’re tricked inside, they find a menagerie of ugly creatures that were once children, too. Things look bleak until the gnomes show up to reek vengeance, and that they do. 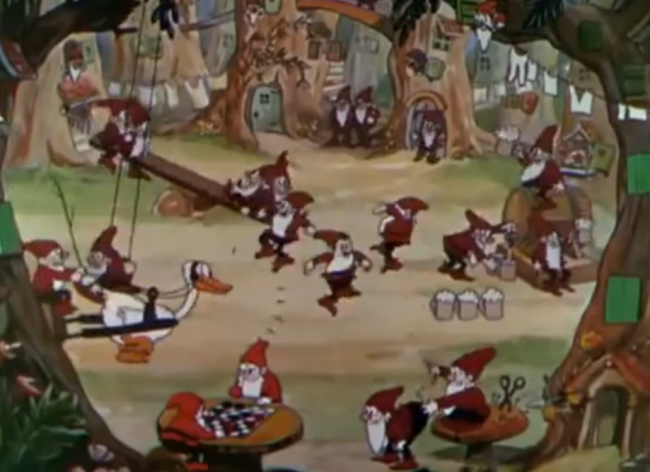 Not sure whether to chalk this one up in the ‘homosexuality’ category or not.

Regardless of whether the tale holds true to the classic interpretation of Hansel and Gretel, (How many of you know anything about Hansel and Gretel besides the candy house and the witch getting shoved in the oven?) (And no points for smartasses who cite the plot summary to Hansel & Gretel: Witch Hunters.) (And, really, how proud of yourself can you be for remembering that Hansel & Gretel: Witch Hunters exists?) … what was I saying?

“Babes in the Woods” is excellent at what some of my favorite comedians would call “good, old fashioned nightmare fuel.” Besides the visage of dozens of snakes and spiders and rats crawling around, we’re treated to several creatures being immolated and turned to stone. As a lesson not to trust strangers, “Babes in the Woods” reminds you that despite the exterior pleasures, odds are good you’re being lured into somewhere cold and horrible only to become disgusting too. And you can only really be saved by good people with a sense of right and wrong and a squadron of geese to use as air support.

There’s so much artistry poured into every frame of “Babes in the Woods” that make it a wonderfully grim little fable for kids and a treat for adults too. Few things make me as nostalgic as old animation, because there’s no way anything like this would ever get produced for mass consumption again, let alone by the biggest, most ‘child friendly’ corporate behemoth in the world.

The black-and-white Mickey Mouse cartoons and the Silly Symphonies are among the studio’s best output, to say nothing of their first five feature films which are all so different in narrative and tone. Really, after 1942, I lose most of my interest in the Disney studio.

Was it the strike, or had the studio grown too big?