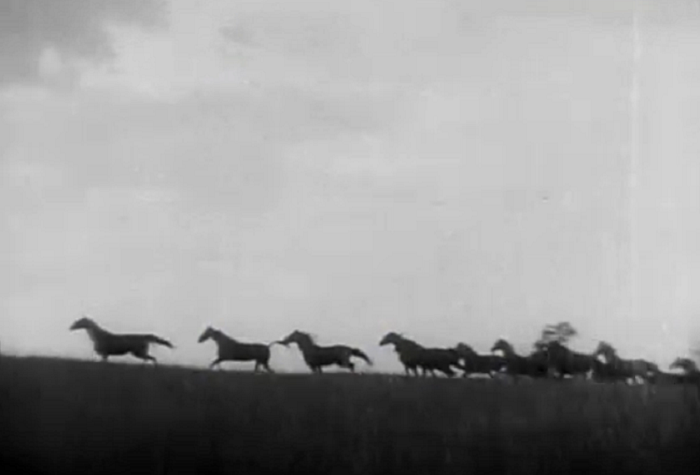 Sporting Blood: A Legacy of Tragedy

“Since the beginning of Time, the Horse has been Man’s loyal friend…. BUT Man has not always been the friend the Horse has to Man….”

Horse racing has always had a special grasp on the American conscience– there’s a romanticism attached to the silent beasts who helped to build this country from the prairie to the cobblestone. Even as their role has diminished in the last century, they remain a symbol of virility, strength, and little girl’s birthday parties.

Of course, like most animals on the planet, even when we revere an animal, that doesn’t mean that they’re treated with any decency. Sporting Blood looks at the horse in its most continually popular and revered form– as an athlete– and then points out the mountains of inhumane degradation that the horse must survive along such a path.

The film opens in Kentucky with a kindly old horse breeder, Jim Rellence, being forced to put down his prized mare after she breaks her ankle. He’s heartbroken, but before her passing she gave birth to a colt named Tommy Boy. Tommy is quickly taken in– into the kitchen to be precise, and lorded over by Rellence and his handlers, two black men named Uncle Ben and Sam. 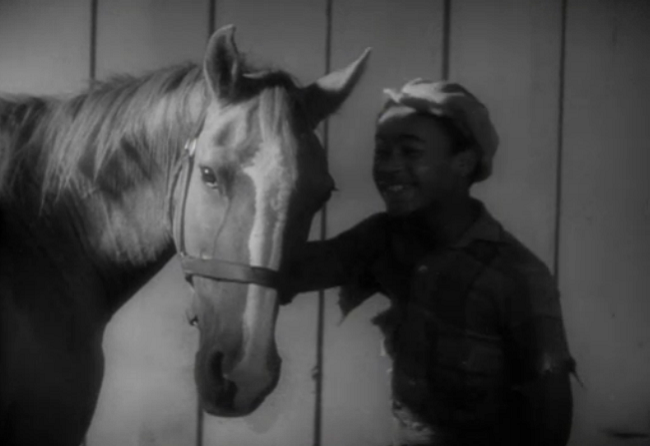 This looks like the opening of the best buddy cop movie ever, to be honest.

A note about these two men: for black characters in 1930s cinema, they’re remarkably well rounded. Ben has a family and a wife, and often makes jokes rather than suffers as the butt of them. Sam is much younger and gets the role that most modern movies would have put in the hands of the owner’s kid– he nurtures the horse, trains it, and loves it, as only someone who has connected with an animal can. Even though the two men are shown to be slow and dull witted a number of times, their connections and care for the horses and knowledge of them is demonstrated to be second to none.

Tommy Boy grows to be a fine stallion with remarkable running times, but because of a cash shortage, Rellence is forced to sell the horse to a well-connected racehorse owner. Sam bids Tommy a sad goodbye, and races along with the departing truck, tearfully explaining everything that Tommy loves and needs.

Away from the pastoral bliss of the farm, Tommy turns out to be a sterling racehorse. Unfortunately, he races before the greedy eyes of Angela, a rich woman who buys whatever pleases her. After she runs him ragged, in a fit she has her husband sell Tommy to a mob boss named Tip who knows a way to get horses to win– speed, naturally. And by that I don’t mean ‘going fast’. 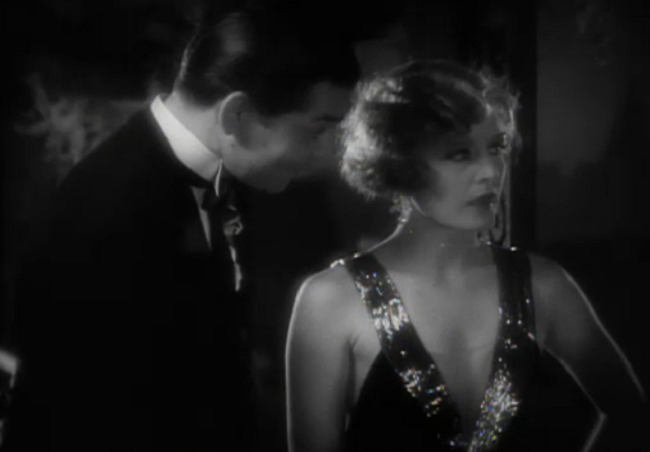 Yes, this film features an illicit love affair. … No, not with the horse, sicko.

This is where Clark Gable enters the picture, about halfway into the film, as a mob crony named Rid who is in love with his boss’ girl. The girl, Ruby, is unhappy with the way alcohol has made her into a slave to Tip, and finds Rid captivating. (And who couldn’t especially after Gable mutters his famous catchphrase, “Come ‘ere, woman!”) Rid and Ruby are also the only ones concerned with Tommy Boy’s treatment, as the constant stream of drugs have lesser effect on the horse and the constant races wear him down.

After a bad bet puts Tommy into Ruby’s hands, she takes the horse back to Rellence, Ben, and Sam in Kentucky and decides to use the opportunity to reform the both of them– cleaned of drugs and alcohol, and to prove to the world that they are still worthy of themselves. Rid is a bit more cynical, and, after he takes up with a new mobster, may be the one thing standing between them and a victory at the Kentucky Derby.

This story and idea– that we’re all born pure and special and must overcome the obstacles and evils that get in our ways– is a popular one. Presenting it through the eyes of an innocent animal doubly reinforces the Depression Era feeling that the rich and corrupt can control a man’s fate out of simple cruelty and greed. 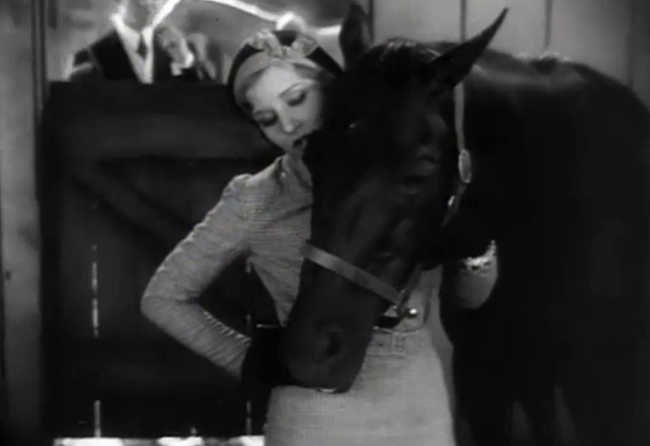 Finding redemption together. … No, not like that. I said the horse *wasn’t* part of the love triangle, you weirdo.

The cast is perfect for this kind of drama, from the noble Madge Evans as the hopeful Ruby to the adorable Marie Prevost as the ditzy glamor hog. Gable is notably less brutal than in most of his other parts, and, as usual, his youthful mustache-free charisma shines.

But it’s Director Charles Brabin who gives the film a gorgeous look and its many thoughtful touches. With his help, the film is able to switch between the horse’s pathos and the human’s story seamlessly. The warm opening, playful montages, and exciting races all radiate from the picture, and while the film wanders away from that at several points, it always comes back, finding a story of hope for even the most mistreated and broken of souls. 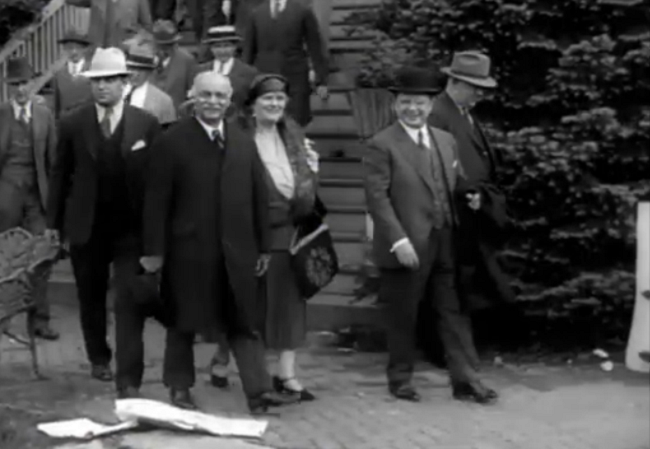 Hey, look, it’s then-Vice President Charles Curtis! No, really, it is. … And, no, I don’t know if he’s involved with the horse. But knowing politicians…

Thank you for another wonderful review (and your site in general) 🙂

That list is so cool! Thank you for sharing that with me– here’s hoping for more likes in the future! 😀

Never even heard of this one. I’ll check it out on Warner Archive.

I wouldn’t make it a very high priority, but it’s a solid flick.

I saw this movie today on TCM. I loved how real it seemed in the beginning, even with the mare dying. I’ve raised horses and foaling is not always a happy ending.. The people Tommy Boy ended up with were unfortunately quite real as I have seen in life. But, Ruby, Mr. Relience, and Sammy are also the good reality of life in the horse world..

I’m glad you liked it. The way the horse is treated in the movie is particularly horrible, and I can’t imagine actually seeing that in real life. Godspeed to you.

Watched it last night, Danny. I liked it a lot. Actually more than you, I think. The opening 5 or so minutes had me thinking it was gonna be a hard slog of creaky early-sound filmmaking, but after that, I was really pulled in. I liked all the main characters, and I agree with you that Ben and Sam were treated with more respect than I expected. Their love for the animals was palpable. I even choked up at the end when Ben is stroking Tommy Boy and saying, “you remember when old Ben held you in his arms?”

But Danny I’m surprised you didn’t mention anything about the story serving as a stand-in for the treatment of black people in the days of slavery. I got a REAL strong Uncle Tom’s Cabin vibe from the whole thing. The moviemakers HAD to have known what they were doing there, don’t you think?

The movie is very sweet and surprisingly humane. I see where you could get the parallel to slavery, but I guess I don’t see it as explicitly as you. You’re right, there’s definitely some pieces that work well to imagine as a slave narrative, but I don’t know. Slave narratives like Uncle Tom’s Cabin had been filmed and would probably lead to bigger box office than stories about mistreated horses. I also think there’s a large gap in empathy between man’s treatment of man and man’s treatment of animals that I’m not sure works in favor for the movie… but I think you have an interesting idea for sure.