The Conquerors (1932) Review, with Richard Dix and Ann Harding 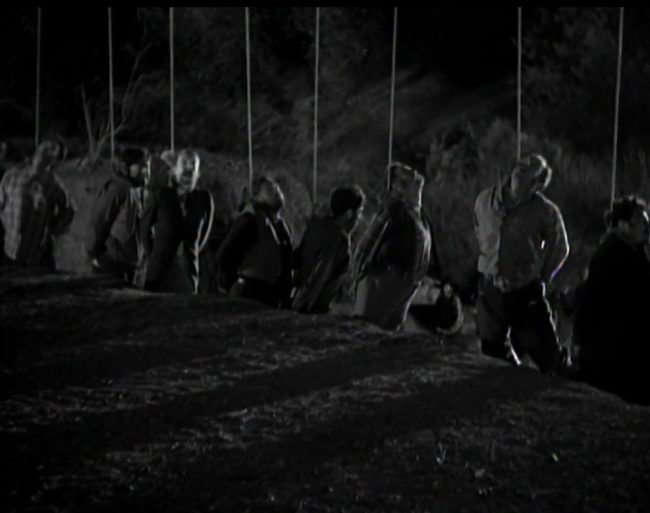 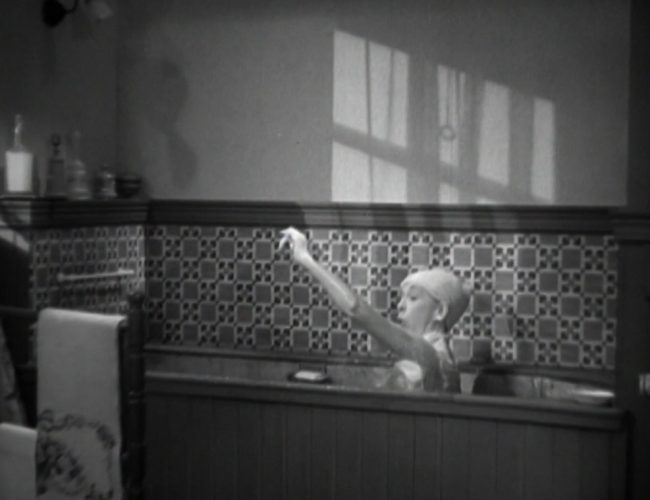 As I starred at the poster for The Conquerors, I kept swearing that I’d seen it before. It took me way too long realize that RKO was to blame for my confusion, and purposefully so: 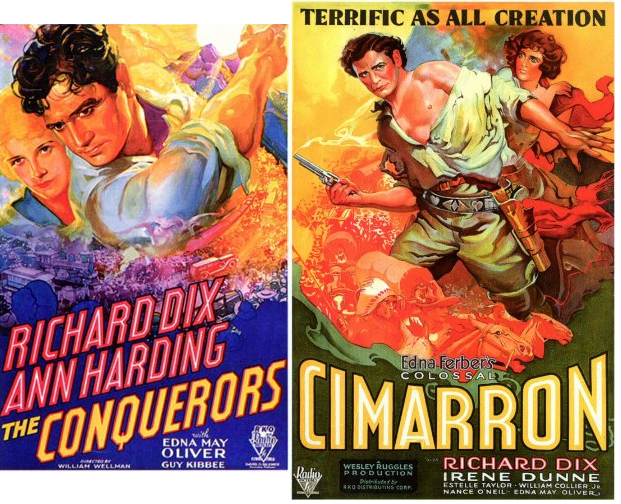 Cimarron, one of the studio’s biggest films and its most critically acclaimed, hung over the studio for a number of years and especially the career of star Richard Dix as he was wrestled into an increasingly improbable set of epic films. The Conquerors, which starts in 1875 and wraps up in 1932, is one of the less exciting variations, but it has a quiet charm and stands to reflect its pre-Code roots more than a lot of similar tales.

It’s the story of two decent, nice people who go West and start a good, decent bank. But that means, in order for us to have a movie, bad shit has to happen to them. After leaving New York without a cent to their names, Roger (Dix) and Caroline (Harding) are ambushed by some crooks. When one molests Caroline, Roger slugs him so hard he falls off their boat, getting a gunshot in the gut as thanks. 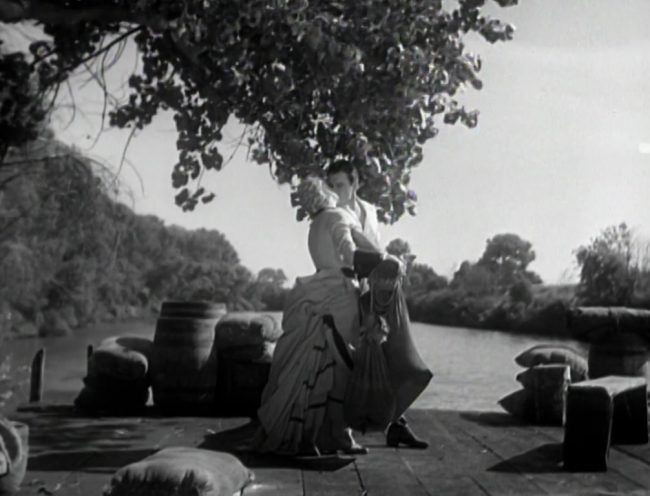 Caroline rushes him to the closest town where the local hotel proprietress Matilda (Oliver) and her husband/the town lush, Dr. Blake (Guy Kibbee), help nurture the injured man. Roger takes weeks to recover– when’s the last time you saw that in a picture?– but even during this time he encourages the townfolk to stand up to the gang that robbed them even if he’s too weak to help.

The townspeople remember Roger’s encouragement, and he takes the next step to start his own fledgling bank. It grows as the west grows and, soon, as his family grows. The bank survives a number of lean times, which are told in montage of men licking their lips and watching piles of money pour from the sky, up until one explosion or another. We’re treated to multiple bearded men shaking their fist and declaring the end of America: “the present is intolerable and the future hopeless!” The movie sees circles in all this, good connected to bad, grief connecting to triumph. 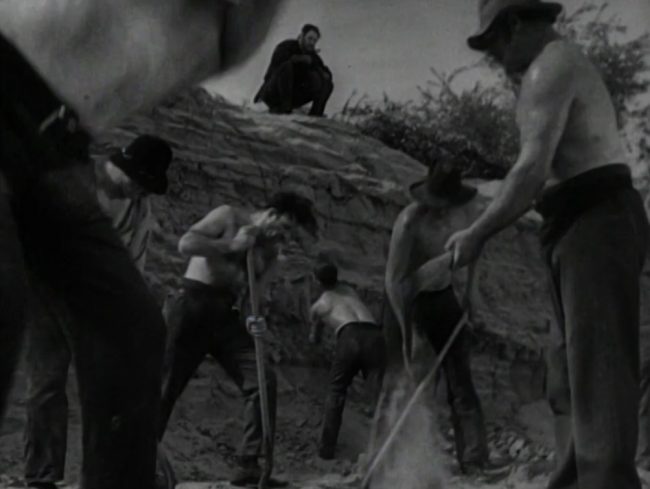 Each time sees Roger sacrificing his family’s safety net to keep his bank afloat, and his faith in the American enterprise is duly rewarded even as his personal life must endure tragedies. Carol is a rock, steering Roger and their family through the ups and downs, and her determination matches Roger’s in a rather sweet syncopation. The film sees the characters up until the 1932 stock market crash, with Richard Dix playing both Roger and his grandson, ending the film with a touching scene of both a torch being passed and history repeating itself once more.

There’s a placid layer of known certainty that gives The Conquerors (which is, it’s safe to say, an overenthusiastic title for the film) the feeling of reassurance. The direction of William Wellman, on loan to RKO, punctuates the safe domesticity of life with tragedies, both big and small, that give the film a nice sense of lived-in realism. Both Dix and Harding are excellent in their steadfast roles, though Harding has a more focused, interesting character here. 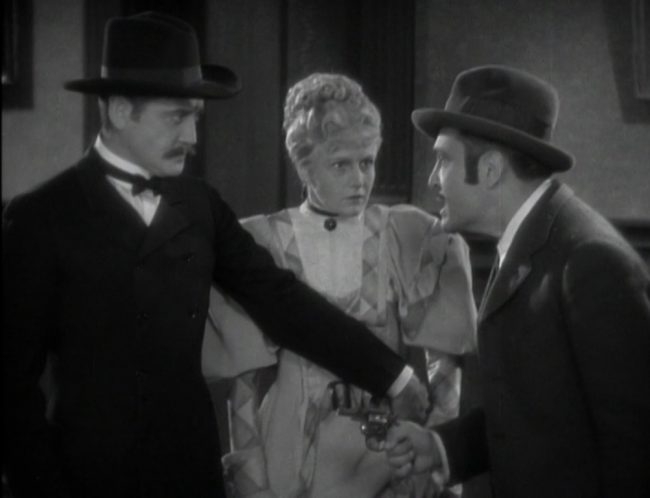 The Conquerors isn’t a perfect epic, but it’s a pleasurable one, an ambitious film that has risk and peril while never making things unsafe for our leads to live their dutiful lives. It’s comforting, even now, as the world burns and the darkness swirls once more. 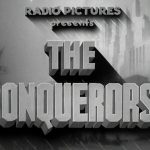 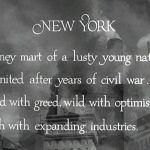 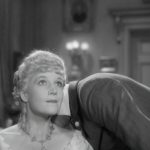 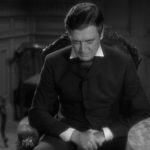 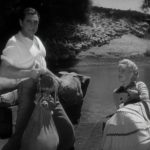 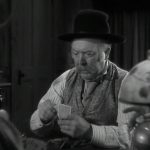 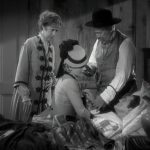 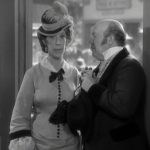 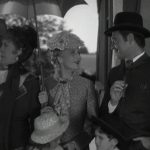 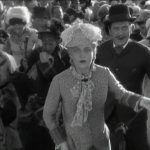 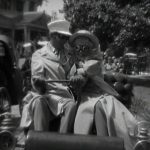 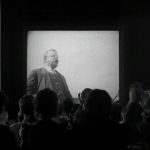 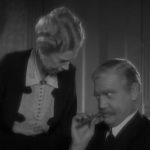 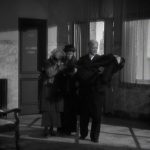 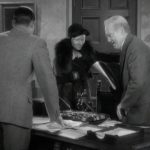 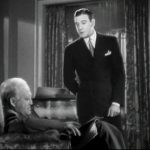 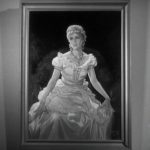 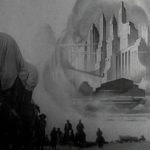 To visually convey decades of change in the span of one feature film, Wellman needed more than one montage. The best in the business, Slavko Vorkapich, created the elaborate montage transitions that signal the passing of the years. He uses toppling stacks of coins, mountains of money, melting silver and other visual cues to metaphorically depict the various economic situations. These montages actually work as short films in themselves, made in the same spirit of the 1920s avant garde movement of which Vorkapich was a major part. […]

Director Wellman inserted a bit of autobiography in The Conquerors. At the outbreak of World War I, the main character played by Dix goes off to France to join the Norton-Harjes Ambulance Corps and later transfers to the Lafayette Flying Corps, which is identical to Wellman’s own wartime experience.

Far from being first and foremost a tale of the old West, The Conquerors is propaganda for American prosperity. Beginning in 1873, stopping over in 1893, and closing in 1929, the film rides out the roller coaster of the American economy throughout it’s most tumultuous years, each time ringing in the prosperity through growing piles of money and cigar chomping bankers who practically drool as they watch the market rise. But when Dix, as grand old man Roger Standish, mumbles, “growing boy has burst its pants again,” about America as it enters the last crash, I can only imagine that the original paying audience half hissing, half chuckling, all hoping, along with the old timer whom they had just watched see it all over and over again.

Ah, glad to see us in agreement on one for the first time in awhile. I was beginning to feel like the anti-Danny 🙂 Yeah, that lynching scene, while brief, really sticks with you, doesn’t it? One of those Holy s—! moments this era offers more than any other. I actually prefer this one to Cimarron, but that’s probably just the difference of us being another year or so into the talkie era combined with that Wellman cherry on top. Enjoyed your look at this one!

Enjoyable comments. I always like Wellman’s gusto. It’s evident even in his stunningly bleak “Safe in Hell.” I read Mr. Mordaunt Hall’s review. He liked his spoilers, didn’t he?