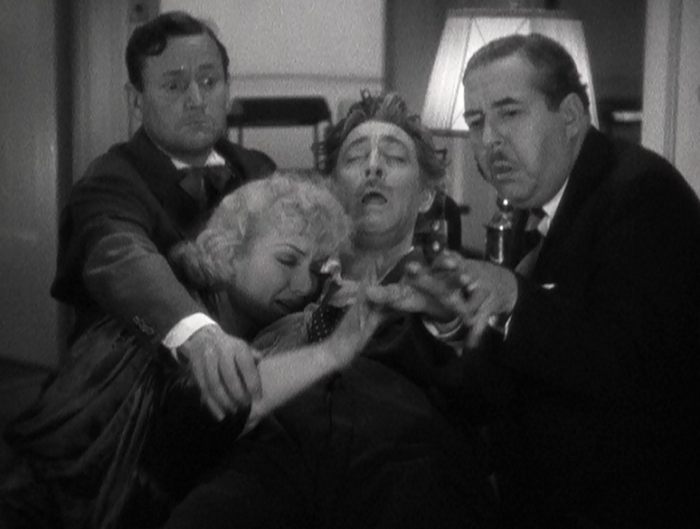 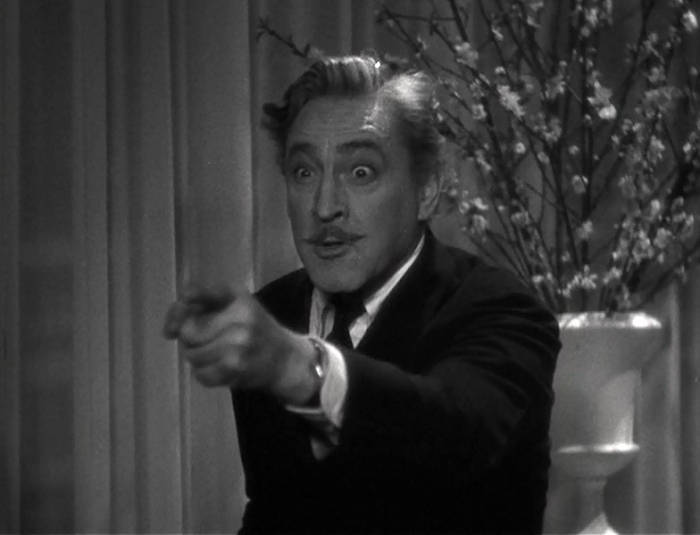 You got that right! 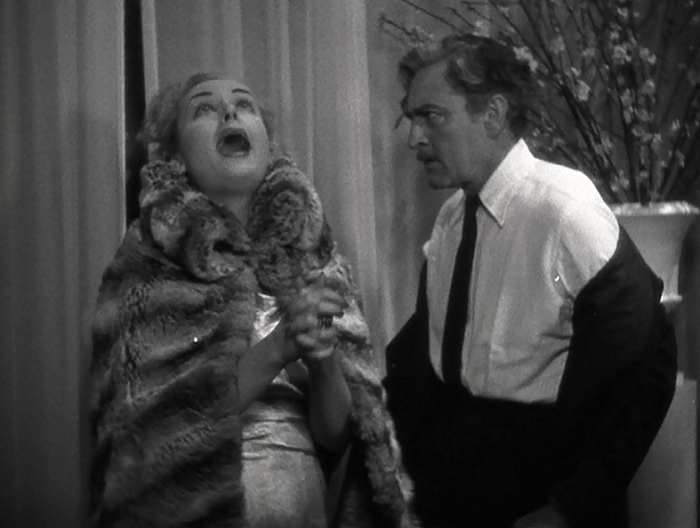 I don’t think this is going well. 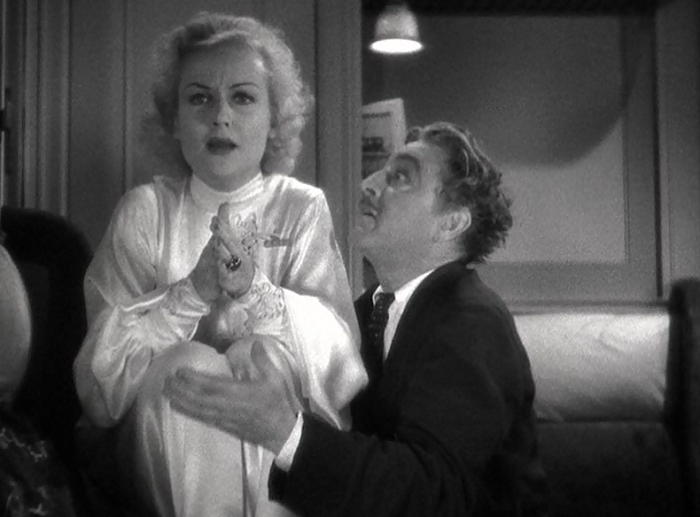 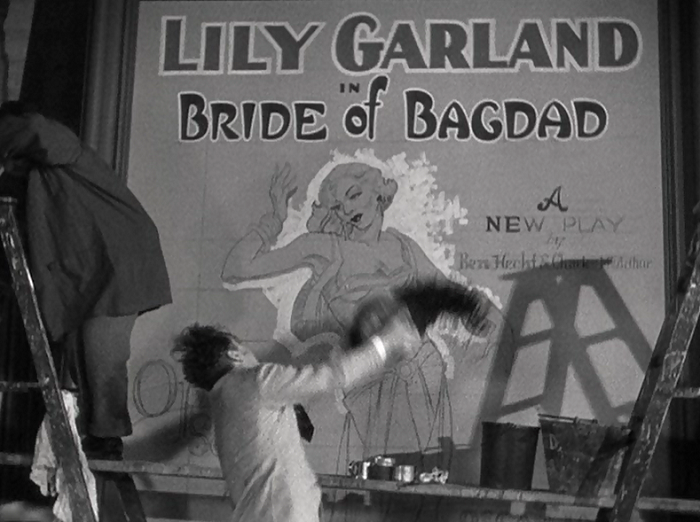 Noticeably the play’s poster here shows the names of the men who wrote the play Twentieth Century was based on — Ben Hecht and Charles MacArthur. 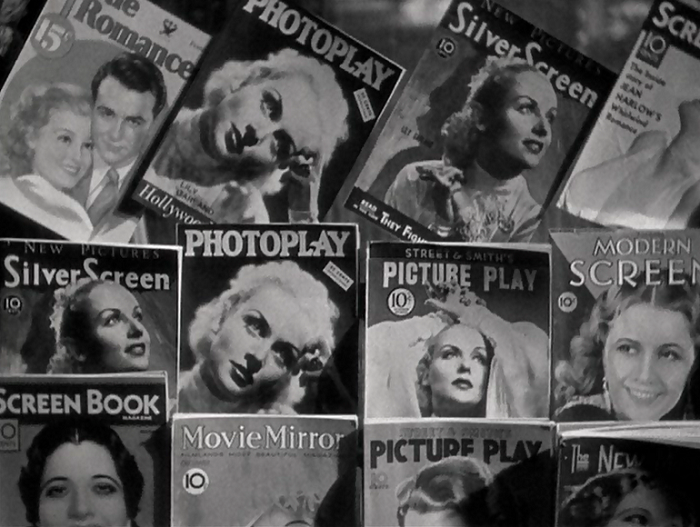 Oh, hey! I recognize Lew Ayres, Kay Francis, Jean Harlow, Mae West, and Barbara Stanwyck, all on top of the many Lombards on display. Do you see anyone I’m missing?

I watched this film a couple of weeks ago and mentioned on Twitter that I was enjoying John Barrymore’s performance. A woman responded to me with the best tweet EVER: “I have a crush on John Barrymore’s hair.” Fabulous!

Ha! That’s a wonderful way of putting it. Both John and his hair are in rare form here.

Hysterical send-up of theatrical types and the top-notch scene stealers, who are every inch the equal of the leads, makes this movie one that never fails to leave me breathless with laughter.

I did drama in high school, and it definitely rang a few bells for me. Glad you enjoy it!

I knew this movie would eventually show up here, and I’ve been kind of dreading it. I’ve seen it two or three times, and I’m afraid Lombard’s acting really bothers me. It just doesn’t seem right somehow. I wish we’d had more of a “Hawks Woman” in this part, tougher, more of an equal to Barrymore, whereas Carole Lombard strikes me as strident, hysterical, and offputting. The rest of the movie is terrific, and Barrymore is at the height of his charming hamminess. But o for a Roz Russell or a Stanwyck or a Jean Arthur in the other role. I really *want* to like this movie, but…

I understand what you’re talking about– Cliff has the same reservations in his article that I linked above. But I disagree. All the actresses you listed would have been too earthy or relatable for the role. The key to why I like her in the movie so much is that Lombard isn’t relatable, but that she’s just as loony as Barrymore. The .gif I have above of her reaction to her boyfriend refusing to get off the train is just priceless. Carole embodies that talentless hack who needs drama in her life just as exaggerated and nutty as Barrymore gets. I love it, but I know that style of scenery chewing from a character who ostensibly is supposed to be the most sympathetic can be a little incongruous.

I love Barrymore’s mischievous spoof on ‘Camille’ in this – it came as a surprise when I remembered that Garbo’s ‘Camille’, which I love, actually came a couple of years later, so he must have been making fun of an earlier version, or versions… there seem to be quite a few earlier films, plus of course all the stage adaptations. Anyway, he’s just so good in this, even though his career was almost at the end of the road – I love that gif you’ve included here, Danny, and your review has made me want to watch it again soon. I also think Lombard is great in this too, and there is a wonderful battle of hamminess between them.

It’s decadently over-the-top. I hadn’t seen the Camille parallel before, but I can sort of see it now. I also really enjoyed the allusions to Svengali, which Barrymore was also in, making the circle complete.

He says something like ‘I shall do it like the ending of Camille’, if I remember rightly. And yeah, I enjoyed the allusions to Svengali too – he’s so great in that too.

Oh yeah! Good catch. I will admit something– just between you and me– that I probably wouldn’t like the entirety of pre-Code nearly as much if Garbo’s Camille were a part of it. Really can’t stand that movie.

Well, Danny, I’ll give it another shot, and keep your perspective in mind as I re-watch. I mean, I watched Seinfeld for years and enjoyed the antics of those miserably selfish people. I guess you’re suggesting that there’s a similar thing going on here–we’re not actually supposed to be rooting for this couple. Instead, we should be laughing *at* them?

Yes. I don’t know if you ever did theater in school, Jack, but they’re the archetypical volatile couple who thrives on drama to survive. They’re completely so caught up in themselves that they must act through all their emotions and lives or else they wouldn’t know what to do. I think one of the movie’s flaws is that it makes it a little too easy for you to sympathize with Lombard early on, because that makes you root for her– even when she turns out to be a total loon as well.

But, then again, it took me a number of tries to like it too. I hope you enjoy it more on your next go around!

It has been a while since i saw this movie but i remember well how much i hoped Jaffe would die for real!

He’s a complete nutjob for sure. I’m sure the character’s real death would probably have to be on the stage.

Great article. However, at that point in time, “ass” meant “donkey”, not “buttocks”. So it’s not really a Naughty Pre-Code Word.