The Beast of the City: Monsters in the Sea of Bullets

“This town has gotten about as rotten as an open grave.”

The cops are just like you and me, you know. They have dull work, they put up with nut jobs, they gamble money, they drink, and they even have precocious families to go home to at the end of the day. If you’re one of those people who read the yellow newspapers or go see those Warner Brothers gangster pictures, you might forget this.

Beast of the City is MGM’s attempt to gently nudge the public away from the glamorous figures of crime– and from Warner Brothers’ gangster goldmine– and back to the forces of good and righteousness. They even kick it off with a bang, quoting just-to-the-left-of-Rand-Paul President Herbert Hoover to start their opening scrawl: 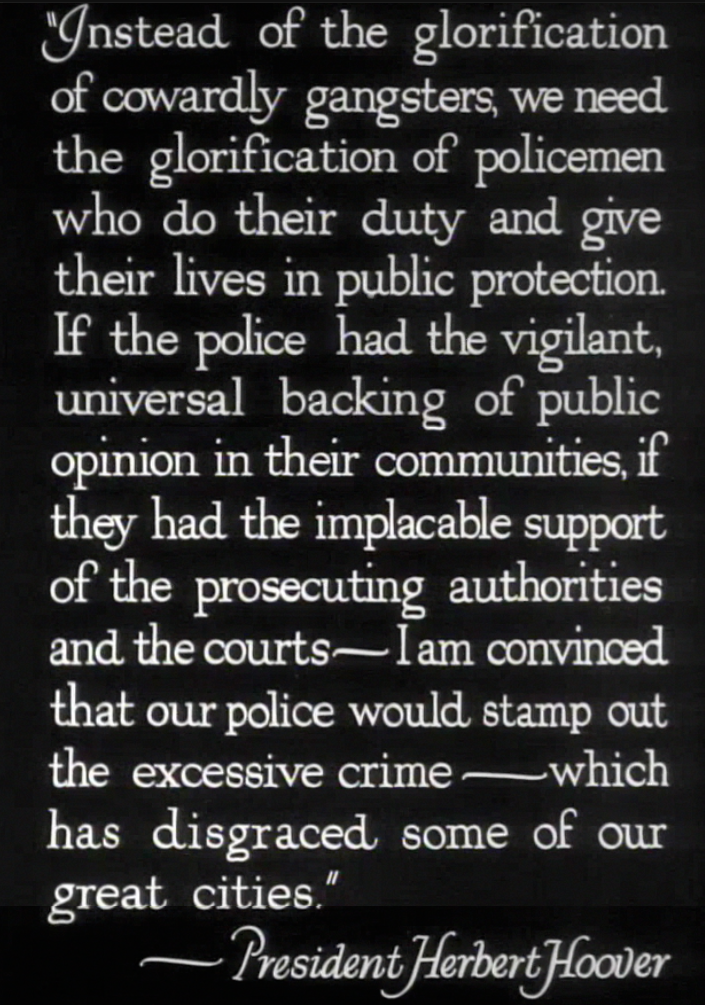 Like a lot of things that Hoover had said, this immediately stinks of shit. Beast of the City isn’t a chronicle of police goodness and humanity, but the story of a crooked cop and his attempts to make things better. It’s a little more dramatic and a little more exciting, but the film doesn’t have the overwhelming stink of propaganda that the opening scrawl indicates.

For instance, as soon as those noble words fade off-screen, we’re taken to the call center of the local police precinct. We see a couple of these calls briefly– usually telling people to calm down or take a break. We see the police on patrol, and even they are in doldrums– the most exciting call involves a skunk in a basement or a nude woman running around uptown.

Things get more interesting, though, when a quartet of bodies are found hanged in an old warehouse. Police detective Jim Fitzpatrick and his two cop buddies arrive on the scene, and make an immediate deduction: it’s a mob hit. Discontent to just round up the usual suspects, Fitzpatrick heads down to the warehouse and picks up Sam Belmonte, your local Al Capone stand-in.

Since Fitzpatrick can’t pin anything on him besides the fact that he sure does gloat a lot for a person in police custody, his bosses are tired of the shenanigans and let Belmonte go. In hopes of saving face, they also reassign Fitzpatrick to a quiet faraway neighborhood. The kind of place where horses wear hats.

At home, we find that Jim Fitzpatrick’s fanatical devotion to crime fitting is usually waylaid by his precocious family life. He has twin teenage daughters who make abysmal pancakes, a son who begs him to read the comics, a doting wife, and then a live in brother, Ed. Ed’s also a police officer, though he works in the vice squad bringing in the drunks.

Ed’s got a problem, and that’s that he finds police work kind of dull. When his brother tries to get him to continue to spy on Belmonte for him, Ed instead becomes focused on one of Belmonte’s beautiful molls. That’s Daisy. He follows her up to her apartment one night, and while he can point out one or two tricks she tries on him– women rarely lie like that on the couch without wanting something. Poor Ed, though, the malaise that police work has put in him soon runs up against the fire Daisy sets in his groin region.

They’re in her apartment, talking, drinking. She gets up and intones the truth of the matter: “You drink beer to make you cool, and it just makes you hot.” She opens up a window and spies in the tenement across the way a woman belly dancing to a crowd of agreeable men. Ed walks over and catches a glimpse as well. This is his exact reaction:

Daisy, though, sees the woman dancing and takes it as a challenge. Actress Jean Harlow is just coming onto her own around this time– MGM was finally transforming her from a beauty icon to an actress– and her seduction of the hapless Ed by writhing and laughing is, to be polite, damned sexy. She got him drunk on her.

This is where problems emerge, though, since Daisy is still a gangster girl at heart, and has an affinity for the finer things in life. Ed’s paycheck isn’t helping their relationship, and while Jim gets promoted to chief after a spectacular gunfight with some dangerous desperadoes, he still won’t give his brother a promotion until he proves himself.

Ed’s head is mixed up though (too much time at the speakeasies), and when given a prime opportunity to prove himself by guarding the transport of some bank money, he instead conspires with the mobsters his brother despises. The results are disastrous, as Jim has his brother followed for protection and instead see a chase that results in a dead kid and one of his best officers gunned down.

Ed is understandably upset, especially when the cowardly crooks point their fingers at him. The three are tried together, but they have a friend in Belmonte, who is more than happy to get his nemesis’ brother acquitted in a direct rebuke to Jim’s authority. The gangsters easily intimidate the jury, laughing all the way home.

The world Beast of the City shows is certainly a grim one. The journalists, when not casually eating sandwiches next to corpses, delight in tormenting the police and elevating the gangsters. The public demands reform when they’re hurt, but slink away whenever a threat is made. The politicians? Corrupt, of course. And the police are trapped between the laws and public opinion, with no recourse but to sacrifice themselves in the name of justice.

The finale of Beast of the City, which I’ll restrain myself from spoiling for you, is operatic to say the least. Few sequences in film are this brutally violent, with the mobsters scattering like worms and the police, the strong arm of justice, staying in formation and true.

Harlow is really quite good here. Compared to her work in stuff like Iron Man or The Secret 6, she’s moved beyond being just eye candy but contains a great deal of under-the-surface tension as well. On the other end of the spectrum, few actors simmer as well as Walter Huston, and Wallace Ford, who can be one of the more invisible leading men of the era, does an excellent job of wearing his weaknesses on his sleeve.

Some of the film’s most important moments don’t come from either Huston or Ford or even Harlow’s hip gyrations, but from the judge overseeing Ed and the mobster’s trial. After their attorney, Michaels, makes a stirring speech to the jury preying on their fears of police brutality and incompetence, the judge is handed the non-guilty verdict. He closes up by admonishing the jury, saying that he hoped that the verdict of guilty for three men whose reckless actions resulted in the death of a child and a police officer would demonstrate ‘a new public courage’. Instead, they merely have ‘a heart of water’.

And, ultimately, that’s what Beast of the City is about. Its final shot is a moving moment, a grasp that indicates understanding in the weakness of man and shows brotherly love for even one who is weak. This isn’t about the police as a true and noble force, but about the never ending battle of justice against fear. As such, it still works pretty damn well.

4 Replies to “The Beast of the City (1932) Review, with Walter Huston and Jean Harlow”