“Will I be safe with you out there in the dark?”

“I know exactly what you’re going through. I used to be terribly ambitious myself. I used to try and write copy. Had visions of grabbing a sweet job at a man’s salary. […] But it takes more than a successful business career to keep a girl warm at nights.”

Big Business Girl is quintessentially a pre-Code movie, if just because it is, in sum, three different films fitfully tied together. There’s one about a woman trying to make it big in a man’s world and succeeding, there’s a scandalous middle section about a married couple and the temptations of other lovers, and then the last act is mostly the male lead sitting in a hotel room with a woman whose primary job is to help facilitate divorces. The movie is essentially a light comedy that never takes itself too seriously, which results in a nice, pleasant ride, with some rather memorably odd moments to help things go down smoothly.

The first part of the movie is a rare treat for the era. Claire (Young) is a fresh faced college graduate, determined to go to the city and make some dough– partly to help pay off her student loans, partly because she craves some success and glory. Her boyfriend, Johnny (Albertson), is a band leader, one of those guys who waves a baton a lot and sticks a big smile on his face. Though he’s pretty immature and irresponsible, he’s going to Europe to tour, and their parting is, more or less, sweet sorrow. 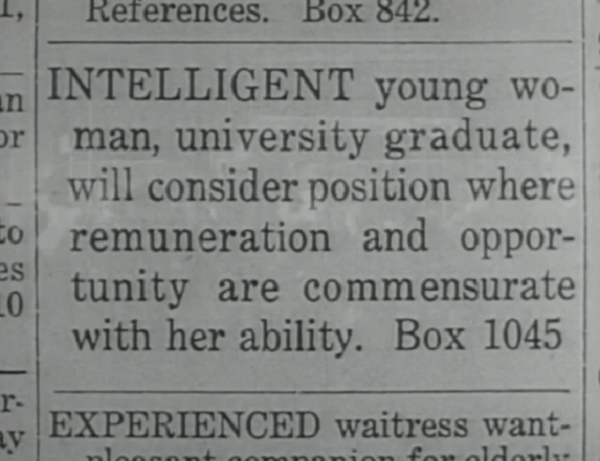 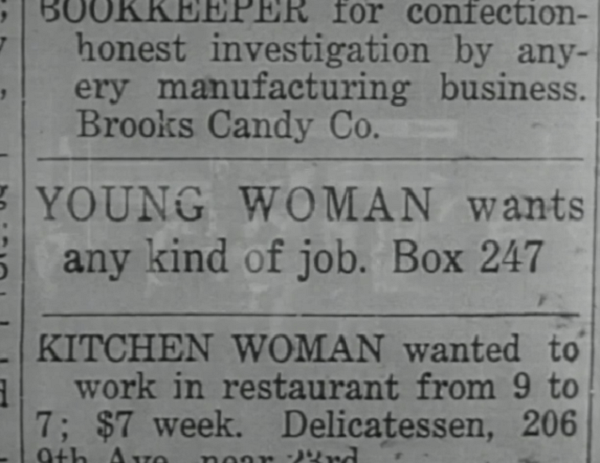 Once in New York, the going is tough for Claire. University educated women are an abnormality, since, at this time, upper education was primarily for earning their M.R.S. degrees, not the gateway to a career. Fortune smiles when she stays behind after a failed interview, only for the advertising firm’s boss, Robert Clayton (Cortez), to come blustering in. First thing he does is order her to take dictation, and the second thing he does is realize she isn’t a bad girl to dictate to.

Cortez learning a thing about dames.

He gives Claire a job as a copywriter for $125 a week and even furnishes her with her own office. He confides in his partner later that her salary is a pittance considering her talent, and, as she overhears him say through his buzzer, believes the $125 would be worth it even if she had nothing between the ears. Claire, who has just worked her way up from debt-riden college student to copywriter in a world of condescending paternalism, learns she’s only gotten a job she believes she deserves because of her looks. She’s  skeptical and infuriated at first, and then begins to melt.

The movie plays with the audience a bit– or at least modern audiences. Is she going to let her boss seduce her to help her career, or is she really romantically interested in the cavalier Cortez? 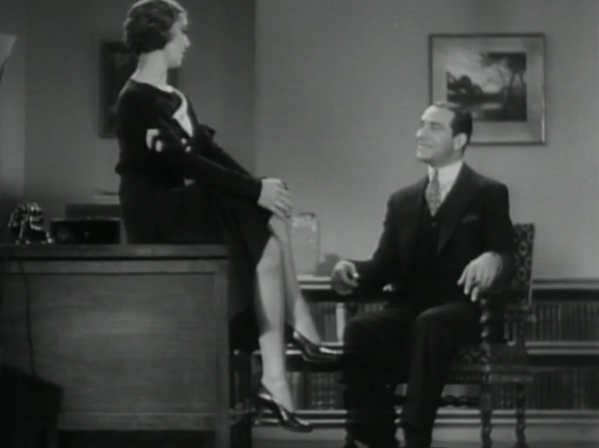 This decision to change focus from Claire’s career ambitions (and their cloudy future considering the rampant sexism of the world she’s entered) unfortunately get tossed for the second part of the movie, a classic triangle between a former lover and a new one. It hurts that Johnny is unreliable and petulant while Robert is condescending and cruel– there’s no horse to root for. Claire busting out and starting her own advertising firm free from both these schmucks would probably be the best option, but we’re about five decades ahead of when that was considered plausible by audiences.

Instead, Robert begins his seduction, and Claire plays along. He badgers her with propositions until he wears her down and gets a kiss. Her response to that smacker:

The middle section reveals the truth, that when Claire says “no” to Robert, she really means “yes”, and that leads to more complications when Johnny walks in on this in his bathrobe and reveals that he and Claire have been secretly married for a year. Claire hadn’t wanted this to gum up the works in finding a job or getting a job done, so she and Johnny go on the outs. 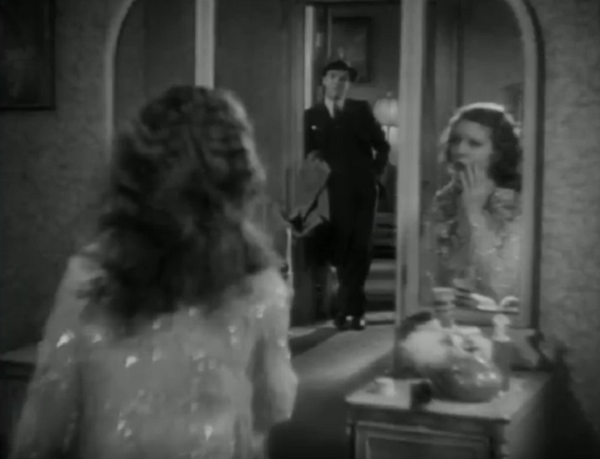 “What’s wrong, Claire? Don’t like guys who just pop in and leer at you without saying anything?”

Claire uses a connection she’s made with a car manufacturer to get Johnny on the radio and makes him famous– discreetly, of course. Don’t want to wound his silly pride. They look like they’re on the verge of mending, but it’s made apparent that Johnny hasn’t held back on sowing some wild oats since he believed that Claire was doing the same thing. Robert is still lurking in the background, though, and hatches a plan, telling both lovers that the other has wanted to call it quits. He sets Johnny up in a hotel room with a scantily clad woman (Joan Blondell, of course) so that when some detectives bust in, Johnny and Claire’s divorce is in the bag.

Johnny is played by Frank Albertson, who melted into supporting parts for most of the rest of his career, tallying up over 200 roles in his life. The most notable thing about his performance, which is missing both charm and much interest, is that he sounds uncannily like Bert Wheeler of Wheeler & Woolsey fame– which gave me a slight smile when I remembered that director William A. Seiter was also behind two of that team’s best comedies, Peach-O-Reno and Diplomaniacs.

Ricardo Cortez is as his usual slimy best, just a hair shy of being sympathetic enough that he’s almost worth rooting for against the pissy Johnny. And Loretta Young is a glowing presence, a vibrant, gleeful being whose heart is constantly broken and reassembled hastily. She’s also convincing as a woman who wants her own career– too bad the movie can’t give her the willpower to deal with the problem decisively. 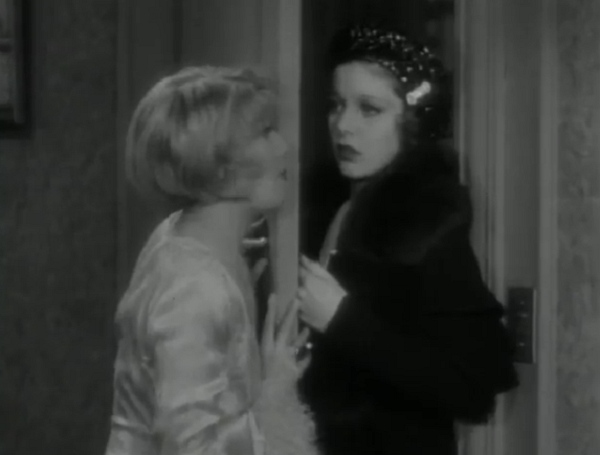 If you enjoy looking at Loretta Young and Joan Blondell, there are worse options than this movie available.

But, just like the movie, I’m saving the best for last: Joan Blondell pops up in the final ten minutes of the movie. Actually, the last 13 if I’m getting technical. She’s the girl who Johnny is left in the capable hands of, and the movie switches again, from melodrama to comedy, as she schools him in the ways of 1930s divorce etiquette. This is pure Blondell burlesque, as she tells stories of her career (“My life is just one hotel room after another.”) and even lays down the law once he becomes shy about going through with it (“If I’m in my neglige, you’re in your pajamas!”).

I won’t burden this review with who ends up with who or if the villain gets punched or not. The finale is nicely open ended, though, with no demands from Johnny that Claire quit her job and prepare to become a baby factory, which is a nice thing to skip considering the era, I think. It is disappointing that Big Business Girl doesn’t focus more on the business end and exploring what Claire really wants out of her career as opposed to the lengthy love triangle, but the movie remains light on its feet, a kind of fun imaginary stories for girls of a certain age (and at a certain time in our history) to watch and dream about.

To a witness who has sat in at the debuts of more routine business girl films this season than it is profitable or even pleasant to recall, “Big Business Girl” came as a surprise of no low order. Its producers have managed to lift a familiar story of coy secretaries, leering male employers and sedulously locked office doors to the level of intelligent entertainment

Hello, Happy New Year to you. Isn’t this the movie where Loretta takes home a male employee, realizes he is gay and the next day pays for his trip to Paris, to study art. Or am I thinking of some other movie? Thanks.

I have not seen “Big Business Girl,” but just caught another Loretta Young pre-Coder (“Weekend Marriage”) on TCM. After a promising start (Loretta as a successful and independent woman) it concludes with a terribly sexist message (“Civilization will collapse if women don’t get back in the kitchen and take care of their helpless mates”).

Augh, don’t ruin it for me! :O But, yeah, that sort of message crops up every so often; I’ll have to check it out.

I certainly hope this film turns up in a Forbidden Hollywood or something. Sounds like a hoot! And of course I love Loretta, Ricardo and Joan.

I’d be amazed if it doesn’t. It pops up on TCM every so often too, so keep a look out!

The movie that made me a Joan Blondell fan. She’s hilarious.

I don’t think I’d have liked the movie so much without her there at the end.

Was Ricardo Cortez gay? Did he marry more than once? His first wife, was that arranged by a studio?

Love the beginning orchestra playing “Constantly” and all those “sexy” dancers. LOL. Loretta Young is so pretty in the early 1930s.