Book Review – “Dangerous Men: Pre-Code Hollywood and The Birth of the Modern Man” by Mick LaSalle 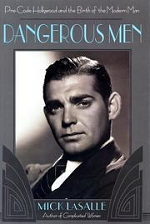 A line in your last paragraph says a lot: “…most of the male roles that emerged in pre-Code endured, unlike the stronger female roles that would be neutered by the Production Code.” This goes to the heart as to why the actors spotlighted in the book and your review are rarely seen especially as ‘Pre-Code icons’ (Warren William, maybe.) Men could go on being the same mugs and lugs and con-men that they were in Pre-Code films, but the women had to clean up their morals and ethics, and hide their lingerie.

I loved this book, which really helped me to get into pre-Codes, and introduced me to Barthelmess in particular, though it was very hard to find many of the films at the time it was published. He writes so well about John Barrymore as well as the others you mention. I’ve long regretted borrowing this from the library multiple times instead of buying it, since it then went out of print and became wildly expensive secondhand, but I see it’s now out on Kindle, so will at last treat myself to a copy!

I read DANGEROUS WOMEN a few years ago and I remember really enjoying it! Since then I’ve wanted to pick up DANGEROUS MEN, but just haven’t gotten around to doing it yet. Too many books, so little time! Maybe now I know that John Gilbert is featured in it, I’ll pick it up relatively soon (I freaking LOVE Gilbert).