Evenings for Sale: Of Counts & Castles

“Now workers like me are at the top and fellas like you–“
“Are at the bottom. Yes.”

Is it weird to like a movie for a single scene? Most of Evenings for Sale, a slight Paramount film, seems assembled from bits and pieces but never with any considerable goal in mind.

But then you hit the 46-minute mark and suddenly you have two older adults talking about one’s past. Not necessarily hitting on a lot but talking about a lot of things without saying some of it out loud. They’re not falling in love nor are they in love, but they understand each other in gentle, adult ways of things that reaches across classes and even the buffoonishness of the film’s dopey plot. Sadly, this is the part where I divert us into the film’s dopey plot. We open with Jenny Kent, boisterous American widower, on her way to Austria to live out of her greatest dreams of being in The Merry Widow.

Meanwhile, the Count von Degenthal (Marshall) has only two items in his possession: a ticket for a costume ball and a revolver. Since this is a Herbert Marshall character and not a Cagney one, he opts to pawn the revolver for his old military uniform and attend the ball as one last big hurrah rather than just hold it up and rob it like any sensible American would have done. At the ball he meets Lela (pronounced ‘Layla’), who has a doting father (George Barbier) and a corpulent fiance (Bert Roach). Lela chance runs into the Count at the ball and they quickly fall in love. Meanwhile, an opportunity presents itself to the Count: his old butler, Bimpfl (Charlie Ruggles; jesus, the names in this one) tells him about the nightclub Cafe Zassiana where interested tourists will pay to dance and dine with disgraced counts and dukes. It’s actually run by the Count von Degenthal’s former butler who gets a kick out of rubbing his former employer’s nose in it. The Count, smiles and bows with a restrained grace, a full on ‘go fuck yourself’ in Herbert Marshall speak.

At the cafe, Lela learns that the Count she loves is disgraced and gets in a tizzy when he politely refuses her money. Meanwhile, von Degenthal meets the aforementioned Jenny and agrees to show her the town. While Bimpfl sees this as a potential payday, the Count is far more sensitive to the fact that she’s a lonely woman who doesn’t seem to understand the whole ‘gigolo’ thing. It becomes obvious why the Count was so broke; he’s simply too nice. Much of your satisfaction coming from Evenings for Sale is your personal return on Herbert Marshall cooing gently in a woman’s ear. It’s a film that centrally relies on your affection for his kind of stiff romantic silence, all of his longing and desire pasted beneath a coy smile and maybe some twinkling eyes. Mind you, that contrasts sharply with the film’s biggest flaw, Sari Maritza underperforming in an impossible part. Her character is an on/off switch between innocent and petulant, but never interesting, and besides being young and pretty, it’s hard to imagine what Marshall’s Count sees in her.

The real dynamite of the film comes between Marshall and Boland, which is an odd combination. Boland usually plays broad comedic parts– that loudmouthed woman everyone is clawing at the walls to escape– while Marshall is that restrained master of the trained eyebrow and wink. Luckily, the film doesn’t match up their comedic talents, leaving those instead for Charlie Ruggles and Bert Roach to tangle with.

Instead we have this very real kinship that Jenny and the Count develop over these deep losses in their pasts. Jenny, being a widower, is desperately trying to live out her dream, despite glaring missteps. (For example, The Merry Widow was actually set in Paris.) For Count von Degenthala, he is the ultimate disgraced noble, the squanderer of his family fortune and name in a country that views him as a joke. The movie wrings some surprising pathos out of it, which only makes it so much more annoying when Lela keeps showing up for yet another misunderstanding that could be dispelled by her just hiding behind that pillar for another goddamn 15 seconds. It’s gotta be script problems somewhere, or perhaps Marshall and Boland looked at the writing and took all the romantic subtext out of their scenes because their parts belong in a better film about expectations, reality and growing old. The film’s other commentary, nouveau rich versus the old money versus the Americans, never really coheres into any kind of commentary besides how none of these classes really understand one another. Great, who knew.

The direction from Stuart Walker (The Eagle and the Hawk) is fine, and Paramount’s vision of European decadence is, as always, unmatched. Evenings for Sale is stiff and formal, suffering from a central romance that lacks chemistry or follow-thru. There are some genuine moments to be found in this one, but I don’t blame you for skipping it.

It is a picture that is helped greatly by Mr. Marshall’s clever, restrained acting. Miss Boland does quite well with some of her scenes, but makes the mistake on several occasions of caricaturing the part. Miss Maritza is satisfactory in her role. 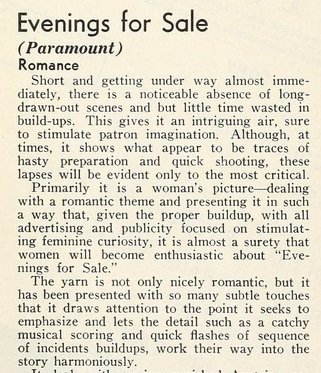 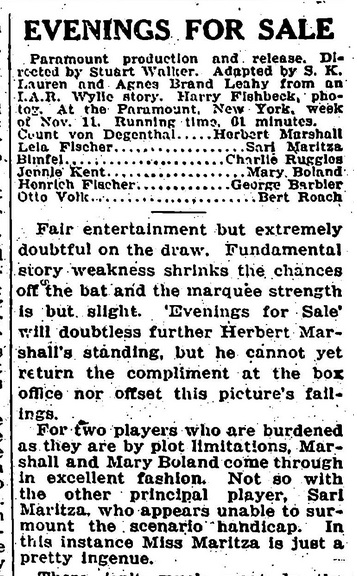 On 30 September 1932, Film Daily reported that a new type of film that was slightly pink, instead of the usual grey, was used for the first time by Harry Fischbeck in Evenings for Sale. The pink film was said to produce perfectly clear whites with all the muddiness and grain absent. The Academy of Motion Picture Arts and Sciences requested a special print of Evenings for Sale so that its members could view the new pink film.