Forsaking All Others (1934) Review, with Joan Crawford, Robert Montgomery, and Clark Gable

Forsaking All Others: Oh, For Fun

“I wish a man would marry me so I could wear a decent hat.”

“That’s the best reason for getting married I ever heard.”

Forsaking All Others is a very silly movie about a very serious issue. A man’s emotional fidelity is just as fickle as his physical one– believe me, I know– and can be tough to grasp, even to himself. It certainly doesn’t help if you’re an adolescent imp like Dill (Robert Montgomery), a man who lets his manhood do all the talking to the detriment to everyone around him. So it’s not much of a surprise that God and nature rush in to punish him time and time again for his infidelity by way of embarrassments, including soaking, stabbing, igniting or vehicular disasters that may land him headfirst into pigpens or ditches.

I bring this up first despite the fact that the protagonist of the film is Mary (Joan Crawford), a simple rich girl whose entire life’s ambition has been to marry Dill. Even though all signs point to Dill being, in total, a completely empty headed plaything for a vengeful God, Mary still deludes herself into thinking he’s some sweetheart deep inside– and this is after he ditches her on their wedding day to marry instead the manipulative Connie (Frances Drake). Mary’s destined true love is actually Jeff (Clark Gable) who’s been sweet on Mary since she, him and Dill were kids. Don’t believe me? Check out this photo. 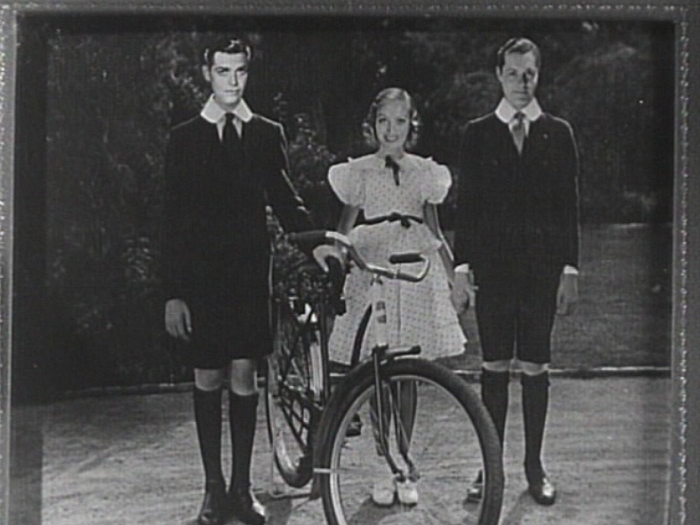 … not the strongest piece of work coming from MGM’s prop department that year.

Thus we’re put in one of those rare love triangle comedies where it’s pretty obvious that Mary and kindhearted, not-as-often-set-aflame Jeff are destined to fall in love just as soon as she loses her blinders and he swallows some pride. It’s a formula, but a reliable one. Mary still runs around with Dill post-his marriage to Connie, though it’s pretty clear that nothing happens until things finally resolve themselves.

It works out well here because the cast and script are eager to make merry with drink and wisecracks– almost as if everyone behind the scenes know it’s not the plot that brought people in, but the beautiful cast’s big smiles and sharp delivery. Gable (fresh off of It Happened One Night), Montgomery (who had Private Lives under his arm at this point), and Director W.S. Van Dyke (in his second film from The Thin Man and apparently trying to top the number of drinks served here) are all in fine form as the comedic band of mischief makers, even if the film doesn’t add up to a whole lot under the hood. Crawford’s comedic acting chops were never especially strong, but she’s fine enough here, even if she retains that basic robotic feeling that seems to strike so many of her films.

They’re helped by a great supporting cast, including the flighty Billie Burke, the deadpan Charles Butterworth, a vamp-ing Frances Drake, and even Rosalind Russell in an early role. It’s a film full of comedic sidekick characters, so much so that I’m not sure whether Gable’s character counts as one or not. No one can take much of the proceedings very seriously, including several scenes where dramatic tension is underwhelmed by the characters’ inability not to crack jokes and create long, silly digressions for the sheer simple pleasure of it. 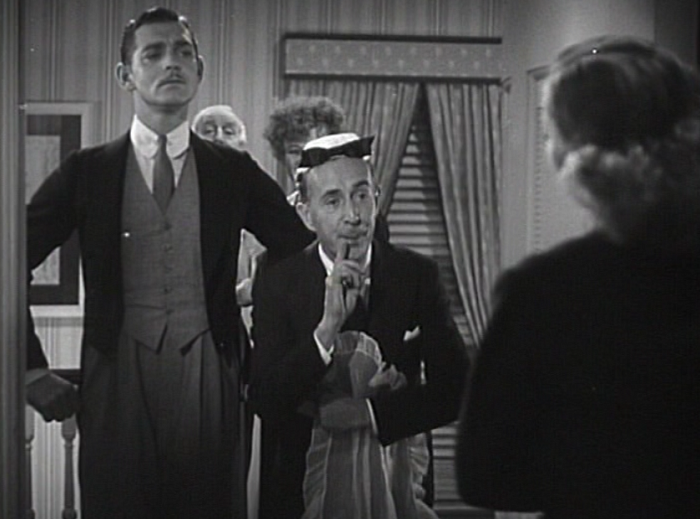 Butterworth also gets stuck in his fair share of frilly frocks.

That may be because the essential reality underlying Forsaking All Others is actually pretty sad. Everyone is rich– and I mean “money-shooting-from-the-ears” rich– and no one seems to get a lick of happiness from it. At the beginning of the film, Jeff is just returning from making a fortune from profiteering during the Spanish civil wars (a country spiraling towards fascism around this point in time) and returning just to propose to Mary. The rest of his group of friends is unchanged– all rich, all drunk– and he has to bury his independent streak to try not to upset the status quo. Mary’s feelings for Dill, too, are steadfast, practically deigned from childhood. Everything in this group of rich brats is built to maintain the hedonistic, staid atmosphere of the upper class, especially from interlopers like Connie. Jeff’s the hero, because he’s smart enough to get out, even if it is by doing what the upper class knows best — profiteering off the weak and miserable.

But Forsaking All Others is funny, I swear! Like in the Van Dyke’s Thin Man films, the characters are eternally witty and catty. While there’s little doubt the emotions are thin, the plot contrived, and the central triangle sexless (made more so by censorship; check out below for more on that), Forsaking All Others is a typically pleasant little screwball farce elevated by an unbeatable cast.

[T]he film ran into trouble with the Hays Office beginning in late September 1934 when the completed script was submitted. At that time some of the dialogue was deemed unacceptable by the office. Words such as “tramp,” “sex appeal” and “nudist wedding” were called objectionable. In a 27 November memo made after a screening of the completed film, Joseph I. Breen of the Hays Office wrote that he was “very gravely concerned about it…” The most problematic scenes, according to information in the file, concerned the sequence during which the characters of “Dill” and “Mary” are alone in her aunt’s cottage. According to a Daily Variety news item on 3 Dec, Breen and his “band of seven” had had a conference with M-G-M executives that ended with Breen saying he was washing his hands of the matter and telling M-G-M to either do the retakes, appeal to the Hays boards or shelve the picture.

The film was approved on December 11, 1934, but only after several eliminations in dialogue and situations were made. The scenes reshot toned down the dialogue and made the cottage evening appear more “innocent” than originally intended. Some aspects of the film that Breen found objectionable were retained in the film, however, such as shots of Clark Gable in his underwear and of a woman giving Crawford a massage. Reviews of the film noted that some underwear and shower scenes still in the film were “risque” by then current standards. 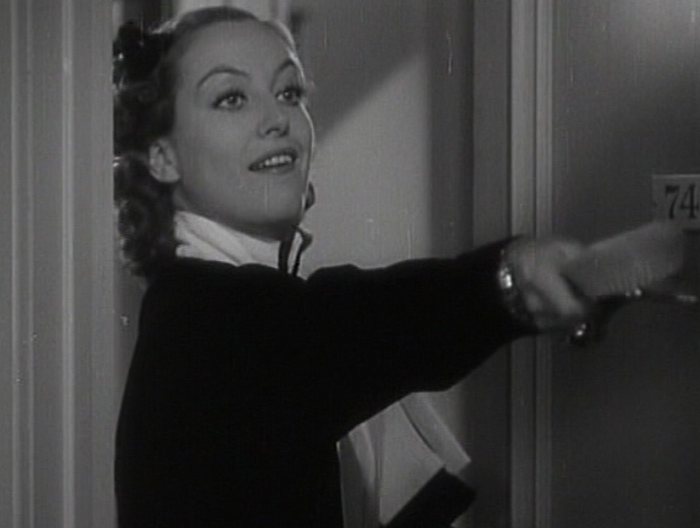 I’m going to imagine that the original version of the movie didn’t involve cutting away from the spanking. Just a guess, though.

He understood the secret of Crawford’s appeal:working class women identified with her as one of their own. Mankiewicz also understood that for Crawford, her entire life was a performance, and he behaved accordingly. “She woke up like a movie star, she went to the john like a movie star,” he would later tell Crawford biographer Bob Thomas. “She had a special outfit for answering the fan mail. She put on another outfit to have lunch.” If Crawford arrived at his office dressed in jewels and furs, Mankiewicz acknowledged her entrance deferentially. If she arrived in slacks, he greeted her informally and gave her a whack on the backside. 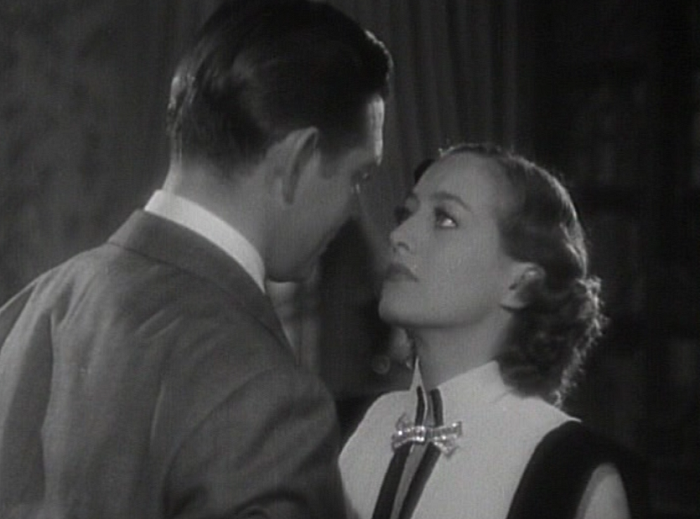 Not the first or last time these two were up to mischief.

That prop photo of the three of them is fucking priceless. If that should ever be auctioned off, it’d fetch a handsome price lol

The photo is only on the screen for a few seconds, but if I were Van Dyke, I probably would have left it to the viewer’s imaginations. It doesn’t take you out of the movie so much as give you a swift kick in the pants out of it.

I’m rewatching this on after several years…its just as good as I remember! I don’t know why this movie is never played on TCM…I had to buy it from Amazon Prime Video, and it was so worth it. It may be that parts of the film have some quality issues, but I don’t care. It’s hilarious! Especially Charles Butterworth. He uplifts any movie he’s in.

I enjoy this film!! Thanks for the thoughtful review. However, I find nothing robotic about Joan Crawford, not here, not ever. She’s as full of joie de vivre as always! She’s not a comedienne, per se, but she always makes me smile with just sheer life force. In most of her comedies she is quite enjoyable, and can be delightfully funny — only “Susan and God” is a misfire. (That whole movie was a misfire, though!)