“I’m terribly in love with you, and I wonder: what are we going to do about it?”

I usually don’t feel bad writing negative reviews. Do you know how many surviving members of the cast and crew of Going Hollywood there probably are right now? Assuming at a minimum someone was 15 and working on the movie, today they’d be 97. And, if there are some 97-year-olds out there who survived making this film, what the odds are that that handful of people knows how to use the internet? And that they would happen upon this site?

Who knows. But if you are that statistical improbability, then I do feel bad for saying this: Going Hollywood is one of the worst movies I’ve seen. Period. Its central performance is so terrible, it makes Tommy Wiseau look like Lawrence Olivier, and Lawrence Olivier look like someone who could act for once. 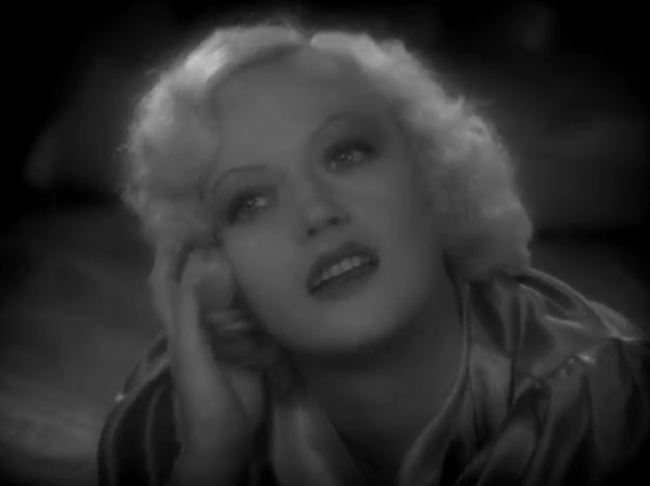 Looking like a stoned Emma Stone, Davies plays Sylvia Bruce, a teacher who is stuck working in a stuffy, old fashioned school. Everything changes when she turns on the radio one night to hear Bill Williams (Bing Crosby playing one of the most lazily named characters ever) crooning and falls instantly in love. She goes to him only to learn he’s shipping off to Hollywood to star in a movie directed by Conroy (Ned Sparks) and produced by innocent do-gooder Ernest (Stuart Erwin). Complicating matters is the fact that Bill is in love with his leading lady, Lili (Fifi D’Orsay). He rejects Sylvia creepy stalker demands for his immediate fealty almost offhand, making her want to prove her love even more.

She follows him to Hollywood and makes friends with Jill (Patsy Kelly) in a feat of desperate screenwriting and an attempt to humanize Sylvia that just can’t work. They end up as extras on the movie Bill’s shooting. Ernest has a thing for Sylvia and substitutes her in as the leading lady after Lili throws a fit, despite Sylvia displaying no visible talent, intelligence or even tact. Sylvia finally gets her date with Bill, but when she refuses to put out on the first date, he rushes back to Lili. Will things end happily? Could things end happily? What’s happiness? I’ve forgotten. 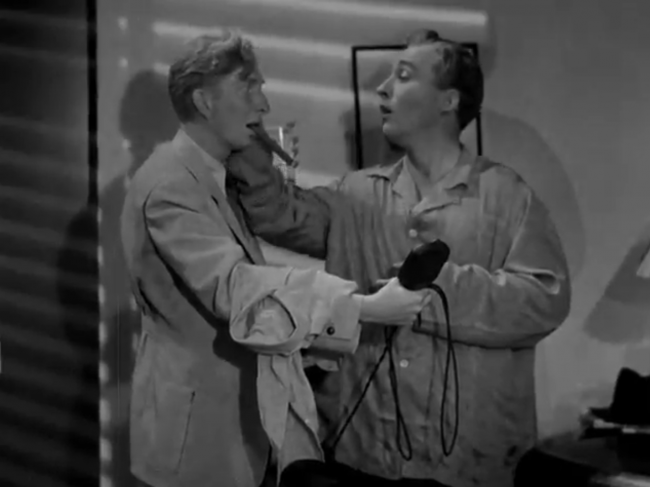 We’ve all been here.

It’s a fairy tale. A messed up, no-good fairy tale that doesn’t follow half its plot threads and sacrifices everything interesting in the service of a bad central performance. But a fairy tale nonetheless.

Please don’t misunderstand me: Davies is quite charming in the only other picture of hers I’ve seen, Show People. But maybe talkies weren’t her thing. I’ve read a couple of people say that Davies’ “comes alive” when she sings or does comedy, which is a crock of bull. Davies stares at her feet when she dances, and seems barely to have enough thought to lift them to the floor. Her comedy bits are just as bad, since it’s just her yelling her jokes at the camera. Just dreadful.

The rest of the cast is composed of seasoned professionals, which makes the jagged pill go down a bit easier. Bing Crosby made a profession out of his Teflon screen personas, and may be too smooth for Bill, but at least gets to belt a few good numbers. Kelly and Sparks do their bits which are always fine, if hollow. Erwin has one of the more frustrating roles, as his Ernest clearly has a small crush on Sylvia (not ‘follow her across the country and stalk her’ crush, but we can’t all be that devoted), but nothing comes of it. 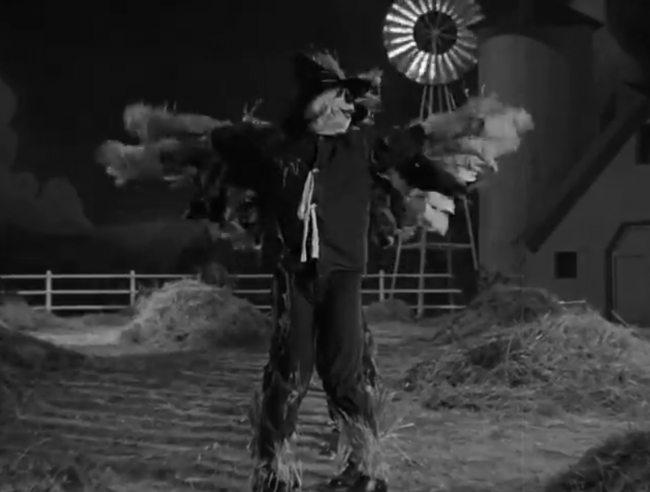 As you can assume with the movie starring Crosby, there are a few musical numbers. The best is the titular one with Crosby and a massive chorus in a replica of Grand Central Station belting out “Going Hollywood”. All of the large scale numbers in the movie are clearly inspired by Busby Berkeley, with Sparks even cracking out a 42nd Street reference, “What do  you think you’re doing– ‘Off to Buffalo’?”, at one point. A small rendition of “Beautiful Girl” (which you may recognize from Singin in the Rain makes an appearance with Crosby dressing while he croons it out to a very confused Sterling Holloway, is also a highlight. Crosby’s last number, an overwrought “Temptation”, is just pretty laughable. Other numbers are fantastically overproduced, such as when we get Davies clomping along a line of scarecrows or any of the other lavish, silly songs that only makes time pass more slowly.

There’s more. A lengthy cameo by “The Three Radio Rogues”, three men doing impersonations of popular radio personalities, is going to follow deathly flat with anyone who isn’t an OTR junkie. (And if you have to ask what OTR is, you won’t like it.) 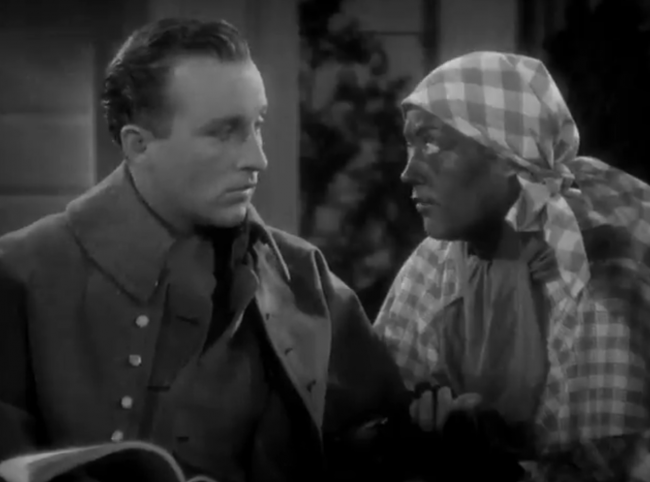 On top of all that, racial sensitivity ahoy.

But everything else starts and stops (and is often forgotten) at the whims of the central relationship, which walks that fine line between being creepy stalking and dull teenage lusting. The movie seems to embody the 1940s ideal of love, where a woman must be in a relationship, more devoted than anyone else, and completely subservient at all times no matter what, and that is how she triumphs in the end. There isn’t a shred of real emotion or human intelligence in the script, and the acting by Davies is gross in its wide eyed and overenuncianting blandness. Going Hollywood is a travesty.

Perhaps the most amusing clip next to the title tune Going Hollywood is Crosby’s brief number Temptation. Now relegated to major camp status, the song is suitable accompaniment for overheated seductions scenes, of the Rudolf Valentino sort. Great cornball stuff, the lyrics build on the notion that within every good girl is a tempting siren leading a good man astray. Drunken Bill sings it to Lili (seen in sultry close-up) in a Mexican bar after Sylvia has walked out on him:

Crosby’s baritone sells this with great emotion, no irony intended. Adapted as a tango, Temptation also saw comic use in Singin’ in the Rain.

Thanks for the review. I started watching this on Warner Archive, and gave up after about 15 minutes. Apparently didn’t miss anything!

You made the right call.

Yet another reason why this blog isn’t dedicated to math rather than old movies.

I’ve long since read that both Davies and Crosby were shitfaced drunk during most of the filming of it, which is no excuse but is an explanation.

Well, they could have had the decency to offer some to the audience.

William Hearst very much wanted The Barretts of Wimpole Street for Marion, and of course Irving Thalberg wanted it for Norma Shearer.

Hearst underwrote a test of Marion in the part in a digest of scenes that ran about an hour, and no longer exists. In 1990, the test’s only remaining living witness was MGM chief film editor, Margaret Booth. Shearer biographer Gavin Lambert then interviewed Booth about that matter saying “when asked about the test, Booth replied with an understated ‘Mr. Mayer was not impressed,’ and then allowed herself a not altogether discreet smile.”

When it became clear too that Marion was out the running for Marie Antoinette as well, which Mayer would only okay if Hearst entirely financed the production costs, a bald vote of ‘no confidence’ in Davies’ talent, off they went to Warners for the remaining three years of Marion’s movie career, and Norma’s name was not mentioned in Hearst’s newspapers for over a year.

Yeah, I talked about that a bit in my Barretts review (I think), but the idea that Davies had any of the talent that Shearer had was pure illusion. I feel bad, too, because I think Davies knew it too.

I also started watching this on Warner Archive – what a stinker. The visuals were stylish in a camp sort of way so I stuck with it way longer than I should have – but Davies was awful. I remain immune to the charms of Der Bingle. I made it to the blackface scene. That did it.

You’re a strong person. I want you to know that.

I haven’t seen this in years but I didn’t recall Davies being that terrible in it. She was usually a better comedic actress and stuff like Barretts or Marie Antoinette certainly wouldn’t be her strong suit. Thus you now have me interested in watching it again to see if she’s really that bad. I saw her in Page Miss Glory and didn’t think she was terrible or anything.

Saw that this movie is on TCM tomorrow and came here to see if it is worth recording. Nope. You are correct in your dislike if you offer “Going Hollywood” as the movie’s best. Even that is dreadful up to the last 30 seconds of the clip. You are my main resource in all movies pre-code and I am happy to be one of your “patrons”. From this Dani to you, Danny, thanks for all you do.