“Must be a big help sometimes, being like you, Olga. Not having any feeling.”

One of the weird things about being the father of a daughter is that sometimes you get comments. Fucked up comments. Like, “Oh, she’s a cutie! Better save up for a shotgun!” Like my biggest problem with a one-year-old is that men will someday want to get her in bed. That’s not a creepy sentiment at all!

But that’s the American way– men are irascible wolves who prey on helpless women, no matter what their age. Some people think this is great; many are horrified by a culture that indoctrinates half its population to be helpless victims. Mervyn LeRoy’s Heat Lightning is about a woman clawing her way in the world, sequestering herself from the awful forces of sexual violence that encircle the country. She falters, and pays for it. 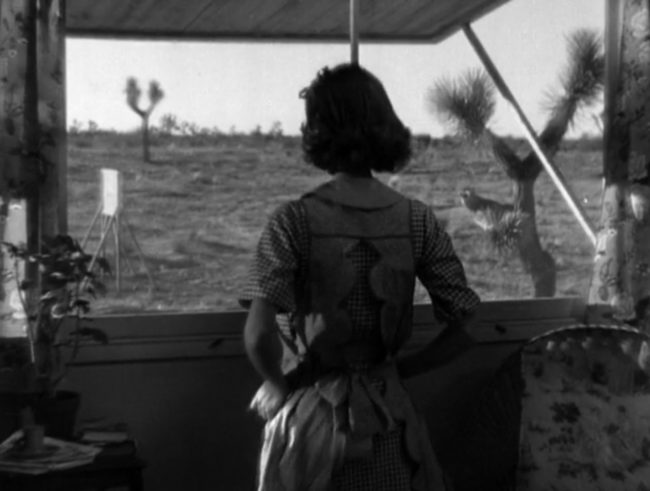 Olga (MacMahon) and Myra (Dvorak) are sisters running a gas station, garage, and restaurant in the middle of the desert. Olga has seen enough of the world and wears her overalls with the same unadorned indifference as the unimpressed expression on her face. Myra is still young and aches to see the world; she’s met a guy in town who promises to show it to her; Olga promises to stop it.

The hot day spirals out of control from there. The small sheds they keep in the back fill up with guests unexpectedly. Besides a pair of rich women, Ms. Tifton (Farrell) and Ms. Ashton-Ashley (Donnelly) and their pudgy chauffer (McHugh) who show up to bicker with one another, there’s a Mexican family who stays overnight and the father who sings sweet melodies. There’s the sheriff who has a crush on Olga who lingers. And then arrives a pair of criminals on the lam, led by George (Foster) who has a history with Olga– one of manipulation and aggression. 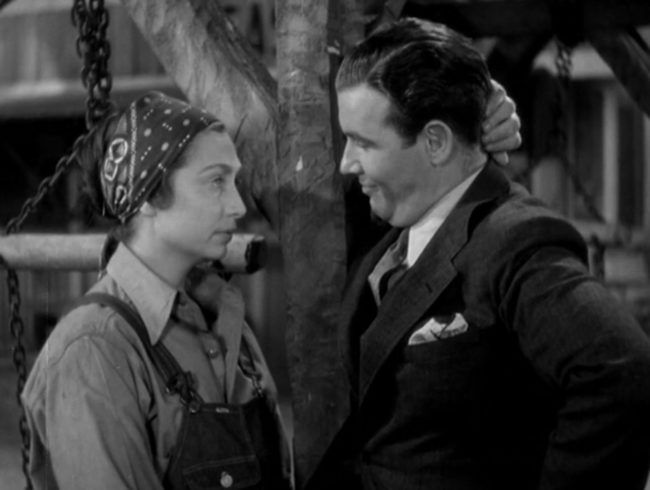 If he only had a heart.

Heat Lightning is infused with atmosphere, a mix of lackadaisical waiting and sinister yearning on an endless night. The desert setting of the film resonates from the screen as the distant storms keep them surrounded. Sex permeates the air as something forbidden but limiting; any escape it offers comes at a price.

The camerawork in the movie is brilliant. Aline MacMahon is kept at arm’s length, never revealing herself but becoming revealed. Her backstory comes in waves, but it’s better told in her eyes as the camera zooms in on her unwavering blank expression. It’s a hell of a performance. 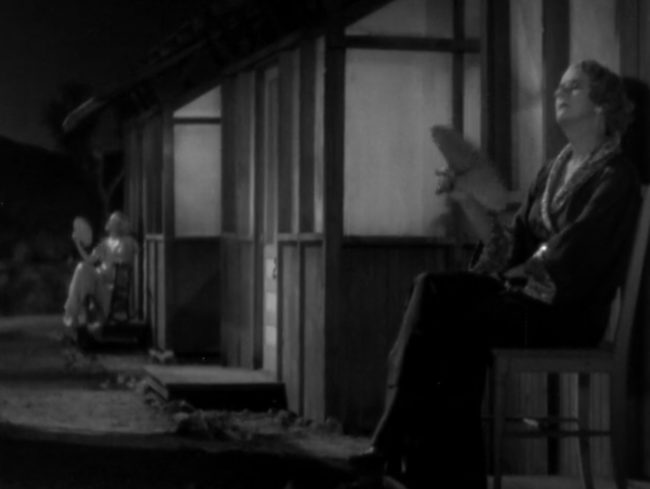 Watch out, Auntie Em, I sense a storm coming.

The rest of the acting is great as well. While I can’t really buy MacMahon and Dvorak as sisters (Dvorak’s precise pronunciation clashes with Aline’s more relaxed naturalism) and Lyle Talbot’s dumb guy schtick ain’t the best, the movie’s stable of classic Warner character actors keep things sprightly. Appropriately, it’s bolstered by snappy dialogue enough blue jokes that you have to wonder if the censors threw up their hands and decided cutting things out would leave nothing left.

Heat Lightning is a real trip and is one of those great pre-Codes that feels extremely modern in the way it delves into class, gender, sisterhood, and love. I’d say that this movie could be remade today without changing a thing but, c’mon. A studio movie with two female leads in this day and age? You must be joking.

Click to enlarge and browse. Side note: my screencapping tool stopped working for this movie at about the 40 minute mark (thanks, Amazon). Sorry for the lack of images this go around. 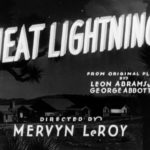 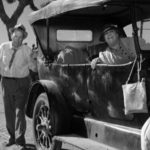 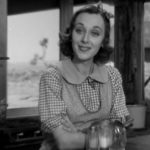 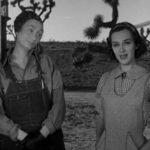 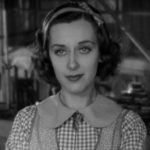 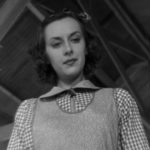 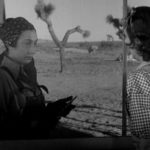 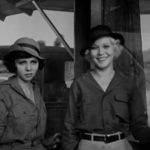 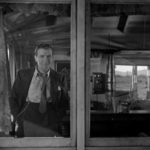 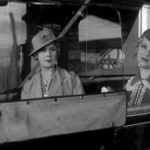 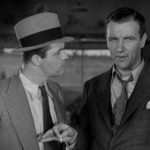 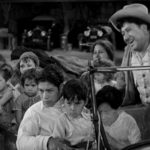 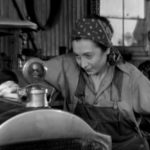 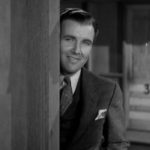 According to notes by the American Film Institute, the Legion of Decency added Heat Lightning to their list of banned films at the time. The same source also stated that “…the Hays Office objected to the seductions that occur in the film because they were in violation of the Production Code, particularly the scene in which “George” leaves “Olga’s” room in the morning and buttons his coat.” The Office also objected to a line of dialogue delivered by one of the showgirls to her gold-digging companion, “Say, it’s your turn to sit up front with that old thigh-pincher.” Though Heat Lightning is relatively tame compared to more racy Pre-Code titles like Baby Face (1933) and Safe in Hell (1931), it is still appropriately cynical, tough-minded and suggestive when it needs to be; it would later be remade as Highway West in 1941 starring Brenda Marshall and Arthur Kennedy.

The production is undoubtedly a faithful transcription of the play, “Heat Lightning,” but the stage work did not arouse much enthusiasm and the cinematic offspring is a drab melodrama with occasional flashes of forced comedy. 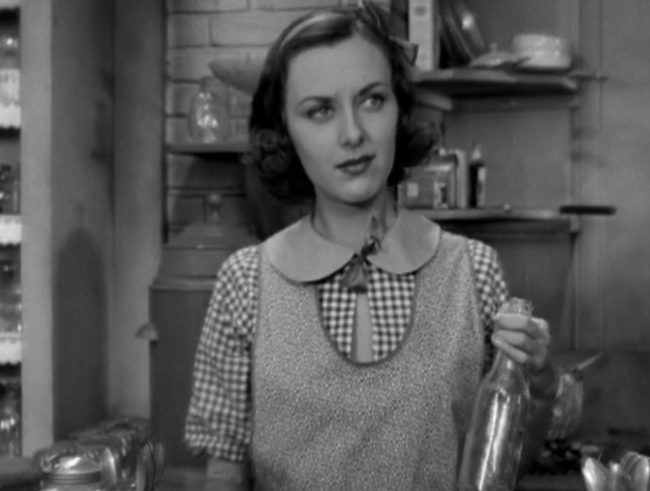 Not in Kansas any more.

So, why was this film ignored when it was released, and remembered so poorly by those involved in its creation?  Aline MacMahon’s character looks so modern, as she takes on a man’s job, the film’s louche morality, the incredible economy of plot, with character, crime, sex, snappy patter, intense performances, all clocked in at a few minutes over an hour.  It’s a completely woman centered film, with the men only existing as background, something you would never see in a studio film today. Because it was banned by the Legion of Decency, and was not included in studio packages of films sold to television, until the recent Pre-Code revival, the writers noting this film in an actor’s resumes would have had no way of seeing it. When researching actors careers from earlier eras, it’s not uncommon to see assessments of films passed from author to author, with none of them apparently having seen the particular film under discussion, (as with Dorothy Vernon of Haddon Hall). Although it screens occasionally on TCM, luckily, Mike Mashon at the Library of Congress, who loves these Pre-Code films, has made a crisp new 35mm print of this relatively obscure title from one of the original camera negatives, as the Library has all pre-1950 Warner Brothers camera negatives in the collection.

I’ve always viewed this film as a chance for the Warner character actors to have a film to themselves, without any ‘stars’ cluttering up the joint. McMahon really shines in this, as does McHugh, and the team of Farrell and Donnelly.

Some movies make a greater impression than others. I always want to slap a guy after watching this.

I love that you want to slap a guy after watching the movie. I love Aline McMahon. She has never given a bad performance.

My wanting to slap a guy after watching a movie is She Had To Say Yes. All the men are total pigs. You should check it out if you’ve never seen it..I was fascinated but repulsed after seeing it.

Thanks Danny! Glad you liked it, which means we can remain friends. 😉

Ah, I adore this movie. I think it’s one of the most unique pre-Codes, and I’m surprised to find that it isn’t more well-known. Aline MacMahon killed it; her skills and demeanor perfectly suited this role, and I love the variety the supporting cast brought – comedy, romance, suspense, melodrama. A mixture for sure, but it all gels well. I saw this on the big screen at the Film Noir Fest a few years back (where Christina Rice shared intro duties!), and it screened right before Safe in Hell. Damn, man. The dense atmosphere and bleak sensibilities in both work so well; they both leave me feeling like I need a shower (a much, much longer and hotter one for Safe in Hell, but still). Both were part of a four feature proto-noir marathon on the closing night of the fest, but I think they’d make a great double bill on their own.

And I can also see it being remade today. The story’s got all the earmarks for a decent, low budget indie – which is what this version kinda feels like to me, even though it’s a studio picture.

I’ve never heard of this film before, but my God, after seeing that cast list and reading your review of it, I have to find myself a copy! Thanks for the great review, Danny!

I love this movie so much. Thanks, as always, for the shout out!