Hold Your Man (1933) Review, with Jean Harlow and Clark Gable 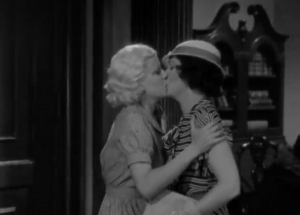 How you can kiss and make up with an old enemy.

Hold Your Man: But Toss the Script

“Even your smile is crooked.”

Always lock the door when you’re taking a bath. This is a hard won lesson in life, I think, but an important one. Had Jean Harlow’s Ruby done such a thing, she may have avoided a stretch in a reformatory and a whole host of other problems, all in the form of Clark Gable’s Eddie. But he’s on the run after one of his cheesy cons goes over too well and a police officer notices, so he busts into Ruby’s apartment and finds her there in the buff, something even a man on the lam is hard pressed to run away from.

Eddie switches places with Ruby in the bathtub as she throws on a robe so that when the police come calling, he has a face covered in suds and a falsetto that throws them off his trail. He emerges, soaked and still in his pants, with a big grin on his face. When she politely declines his forthright grinning, he counters.

“You know all the answers, don’t you?” he asks.

“Yeah, to dumb questions,” she retorts. 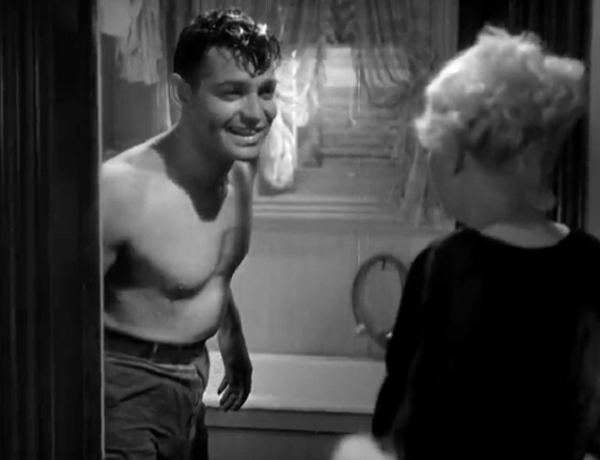 The third pairing of Jean Harlow and Clark Gable after The Secret Six and the mega hit Red Dust shows once again that MGM was more than happy to dabble in the Warner Brothers wheelhouse when it came to their two most sexually appealing stars. Fans of the James Cagney/Joan Blondell flick Blonde Crazy will undoubtedly get a twinge of nostalgia for it as we get Gable and Harlow swatting innuendos and insults to one another like tennis balls.

Eddie is a conman who grifts suckers for money. Ruby does the same thing, only instead of tricking a guy into buying a cheap ring, she gets them to fork over rent money during a fancy dinner. Ruby’s met a dozen smart guys like Eddie, but he’s got that crooked smile and straightforward demeanor that’s hard to resist. She can even get past it when one of Eddie’s exes, Gypsy, gives her a smack in the face– something Ruby meets with a mean left hook.

Eddie knows he’s smitten when his attempts to use Ruby as a seduction tool on a mark instead inflames him with jealousy. As soon as he realizes he can’t stand seeing her with anyone else, he does the only sensible thing and marches her down to the courthouse for a marriage license. As circumstances and screenwriting would have it, though, right here at the halfway point is when it’s discovered that Eddie’s violent punch to the drunken mark accidentally killed him. Eddie escapes, but Ruby is sent away to a woman reformatory. As an accessory to manslaughter, I guess. 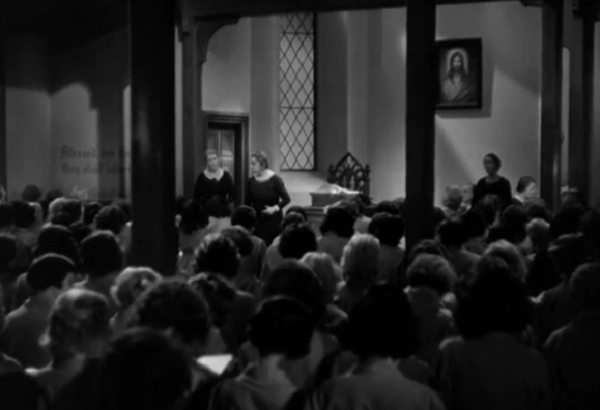 This happens at almost precisely the halfway mark in the movie, and so we get to watch as MGM goes from aping Blonde Crazy to aping Ladies They Talk About. This includes a surprisingly diverse cast of characters for a reformatory, such as a nymphomaniac black woman (Theresa Harris, Baby Face) and a frustrated, raving socialist (Muriel Kirkland). The reformatory is determined to instill good, Christian morals in all of its charges, and like the teen exploitation flicks of the 1950s, to do so with as many melodramatically righteous flourishes as possible.

Rumors are that Louis B. Mayer, after seeing the controversy drummed up by Harlow in pictures like Red Headed Woman and the aforementioned Red Dust,  was under pressure from censors and religious groups to stop showcasing Jean Harlow as a woman who uses sex as a tool and succeeds handsomely for it in act three. So the latter half of Hold Your Man is about the trials of a single, unwed mother as she undergoes a transformation from hustler to righteous woman. Eddie reappears, too, to make an honest woman out of her, which involves the convicts engaging in a 30-minute long “Mission: Impossible”-style operation to get the two together and in front of a preacher.

As fun as the dueling cons act in the first half of the movie are, and as nice as it is to see a black woman and socialist treated emphatically in the second half, Hold Your Man reeks of that desire to have one’s cake and eat it too. There’s none of the steamy eroticism of Red Dust, and the cons that Ruby and Eddie perpetrate are playground-level stuff, especially since the movie underlines and highlights that most of the people they’re grafting are either okay with it or very much deserving of it. 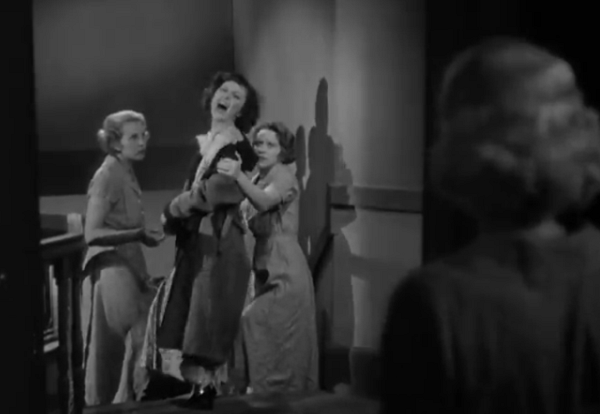 All you really need in the big house is the support of a good friend. Or the maniacal hatred of a good enemy.

Gable feels completely wasted in the picture. I don’t mean this as an insult, but you could probably have copy and pasted Douglas Fairbanks Jr. into the proceedings and have lost nothing. While I like both actors, Gable’s best roles have a sense of anger beneath, a forthright resentment at the world for not going along with him, something playful but dangerous. You would imagine that would work well in the story of serial womanizer and a con artist, but it never comes in to play. Eddie is a dope, with the movie more happy to make cracks about his smile than get to anything much deeper than that. Even when he inflicts a fatal punch, it’s petulant rather than coming from anywhere deep inside the character. When it comes to the last act, especially, Eddie is hard to read as anything other than a (suddenly) sentimental ninny. Gable’s appeal is out the window.

That being said, Harlow definitely shows off how well her comedic chops had developed in a few short years. She has wryness down to a science but can play put upon as well. In fact, she’s just about everything in this picture, from unbelievably generous to long suffering and lovable; it’d be a stretch for a lot of actresses, but she manages to get by. However, Harlow is given a tearful rendition of the title track to sing, and I’ll happily go into the camp that suggests maybe giving Harlow a number to sing is against every viewer’s best interests. Frankly, Joan Blondell has got a better set of pipes, and I know exactly what I mean when I say that.

Other actors of note occupy the periphery. Dorothy Burgess (Black Moon, Hat, Coat and Glove) is my favorite “crazy bitch” of pre-Code, and really gets to let loose as Gypsy, Ruby’s romantic rival. Her maniacal laugh once she understands why Ruby is so upset about her incarceration is priceless. Theresa Harris gets an unconventional role for a black woman in this time, free of most (but, let’s be honest, not all) condescension. Stuart Erwin (Palooka) gets to pop up, too, a kind of bland nice guy actor who plays a kind of bland nice guy that’s emblematic of the film’s belief in the goodness of Midwestern decency– as well as its dullness. 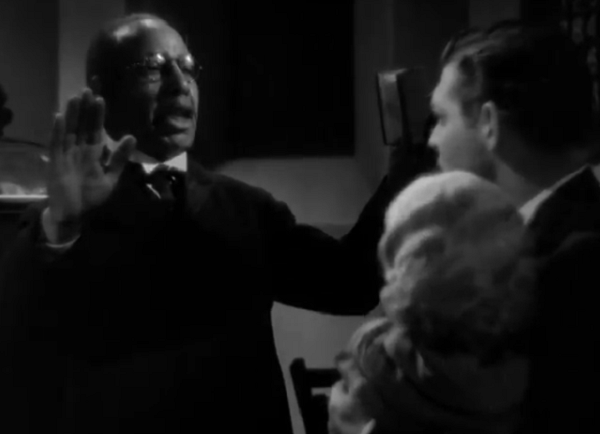 Hold it a second. This is really how the movie ends?

Hold Your Man has its moments early on when Gable and Harlow get to mess with one another, but the movie’s derailment from an okay story of grifters to a righteous imprisonment screed to a meticulous heist is ludicrous. Fun, yes, but depressing all the same– it gives the movie an air of desperation and sadness, taking the stars of Red Dust and putting them in a movie that would probably today be considered too saccharine for the Walt Disney Company.

Hold Your Man ends up endorsing Ruby’s confinement and punitive treatment at the hands of coercive, regimented authority, ironically embodied in older, asexual or “mannish” women. Bad women are also subject to mandatory indoctrination in Christianity, regardless of the existence of any other form of religious belief, and so Ruby is depicted as benefiting from this transitional stage into the “respectable” social order. Her anguished declaration of self-abasement in front of the matron marks the acknowledgment of her own need for “reform”. The desperation with which Ruby and Eddie desire a marriage ceremony to legitimise their baby is set in hysterical counterpoint to the police sirens intruding upon the wedding as an auditory reminder of the authorities to which they must conform. Eddie’s stint in Sing Sing promises the reward of a bourgeois life in the Midwest, the heartland of moral goodness set in contrast to the New York sidewalks, speak-easies, and cheap apartments which provide the settings for the first half of the film.

It was refreshing to see black actors in this era in such significant and unstereotypical roles. Apparently there was an alternate version shot for Southern theaters with a white actor, Henry B. Walthall, playing a pastor instead. 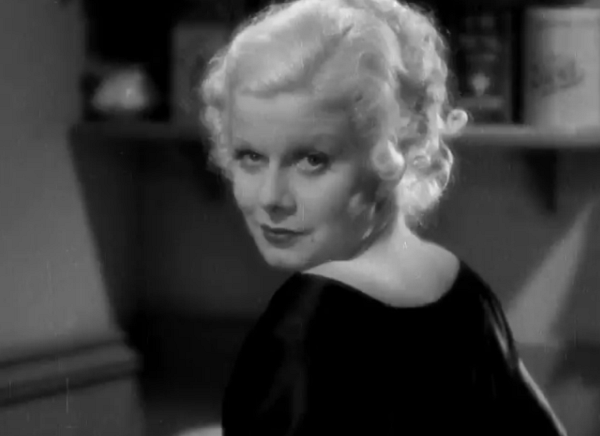 Gable was still in the middle of an affair with Joan Crawford at this time and her husband, Douglas Fairbanks Jr.,was threatening to name Gable as co-respondent in his divorce filing. Studio head Louis B. Mayer ordered Gable and Crawford to stay apart to avoid a scandal.

While Harlow was often typecast as a woman with dubious morals, she never appears crass or cheap. There’s a sweetness, strength and intelligence about her, an air of dignity that overcomes whatever unfortunate circumstance she finds herself in. She’s not embarrassed by her actions (sleeping around) or their results (an unwanted pregnancy), embracing life on her own terms, which is why she continues to be a major Hollywood presence. Ruby is just a regular girl, who made a few errors in judgment, but is still a worthwhile human being. There’s depth to her bad girl and her performance, despite the ridiculous nature of the plot, is a wonderful showcase of the power in living life on one’s own terms. What begins as a saucy, sexy romp ends on a pious, moralistic and unbelievable note; however, if you’re a fan of either Gable or Harlow, you’ll enjoy this film well enough. Even the rules and restrictions of decent society can’t dampen their charisma.

Laughter and applause punctuated the unreeling of the story and there is no explanation for that other than the popularity of Mr. Gable and Miss Harlow. Certainly there was little else about the film to merit such a response.

This film is almost like two different sensibilities–the need of a 1930’s audience to get what it wants (Harlow and Gable in a clinch) and the needs of the censor to “reform” the poor Depression viewer looking for escape. And I agree Danny–Gable might as well have been Fairbanks.

Does anyone know who the baby was at the end?