Let Us Be Gay (1930) Review, with Norma Shearer and Marie Dressler

“I know how men feel about those things now.”

Let Us Be Gay: Happy. They Mean Happy.

“Wait.” I caught myself a minute or so into Let Us Be Gay. “Is that… Norma Shearer?”

Despite her name being the first on the marquee and obviously being the star of the show, it took me a minute or two to recognize one of the most famous actresses of her time. That’s because, in Let Us Be Gay, Norma Shearer does something almost as shocking as her many onscreen taboo-breaking trysts. Norma Shearer lets herself be frumpy. 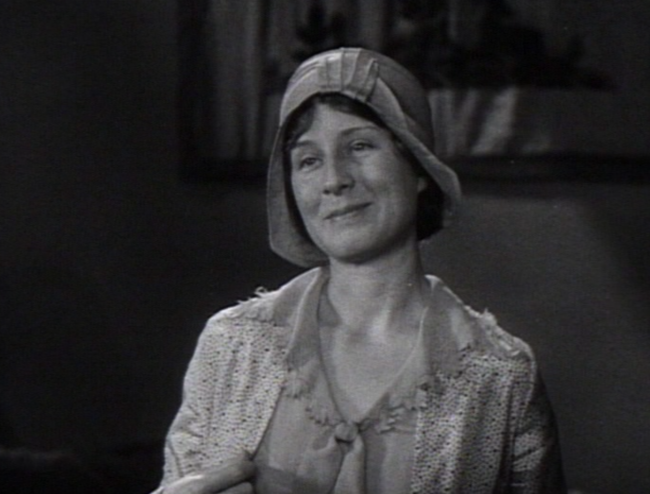 Old Hollywood, built on glamor and glitz, rarely gave actors the ability to step out of their high society persona. Here, with Shearer as the corralled Kitty– meek and subservient to a hilt– makes her character into an everywoman, absolutely indistinguishable on the street. Kitty is pathetically in love with her husband, Bob (Rod LaRocque), doting on her children endlessly and going so far as to mutter a song to herself that consists of nothing but “I love you” over and over again. When his mistress makes an unexpected visit to their parlor, her world is shattered, and she demands to never see him again.

Because glitz and glamor still happens in Hollywood, we flash forward three years. Kitty found herself in Paris, as well as plenty of men, and is invited to stay at a friend’s mansion on Long Island for a weekend. Mrs. Bouccicault (Marie Dressler) wants her help. She knows how good Kitty is at stealing men, and she needs her granddaughter, Diane (the always adorable Sally Eilers), saved from one rapacious scoundrel. And, wouldn’t you know it, it turns out to be none other than Bob. 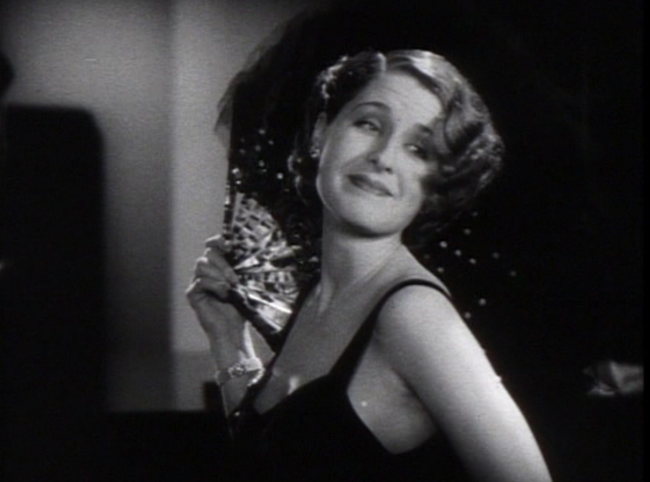 Norma back to (movie star) normal.

At one point Kitty warns everyone they’re getting dangerously close to being in a French farce, and she’s not too far off. While it’s obvious that Kitty still harbors some feelings and Bob harbors some much louder ones, much of the fun in the movie is seeing how the many inhabitants of Bouccicault’s weekend get together bounce off one another, with the women fighting over the men and the men fighting over Kitty. Also among the guests are Diane’s nervous fiance, Bruce (Raymond Hackett), amateur poet Wallace (Tyrell Davis), society matron and stuffy egotist Madge (Hedda Hopper), and charming bon vivant Townley (Gilbert Emery). They drink, they flirt, they tease, and they even sing (badly, in all cases).

Kitty and Bob do end up getting back together, but both for Kitty and in the script itself, it can’t help but feel like a grudging recoupling. Kitty still holds dear Bob, but she manages to fend him off until the last minute of the film, where she breaks down and admits that she misses him. While Bob’s no catch (we also learn that Bob hasn’t seen his kids in three years– how charming is that?), at least we’re not stuck with a lengthy denouement about their reconciliation. Both learned what else was out there, and they want to make their family whole again. End of movie. Now you know when to stop the tape the next time through.

And Kitty learned that a plain Jane can go from a duck to a swan. It’s cathartic for the audience to be sure, and undoubtedly why Shearer made her transformation so palpable. Anyone can become glamorous. While it may take Kitty three years in Paris and more men than she can recall, it’s a lush fantasy, utterly tantalizing for a theater full of women stuck in identically inert marriages. Or, hell, anyone who just wishes to taste a bit of what wit and sophistication really is in life.

Marie Dressler could chew more scenery than Lionel Barrymore in a wig, and if you don’t believe me, watch 1936’s The Devil Doll and compare.

Let Us Be Gay is definitely a 1930 movie. The camera doesn’t move much, and several scenes start a few seconds before they ‘start’, if you know what I mean. Actor Rod LaRocque is also a liability, woodenly playing a petulant character who never exudes an ounce of charm to explain why Diane would be so drawn to him. (Kitty at least has the history to explain her attraction.) He has no sexual gusto, nothing that would draw the audience to him. But maybe that’s why the movie’s able to hold its romantic tension so long. Who cares if they get back together?

Among the film’s assets, though, first must be counted Marie Dressler. Only a few films after her dynamic breakthrough in Anna Christie, she once again engages in her delightful scene chewing hijinks, with the eccentric Bouccicault (who demands to be called eccentric) having plenty of chances for laughs and not-so-subtle manipulations. Her interactions with Shearer are among the movie’s best as the two characters bring out each other’s long independent streaks with banter, smiles and winks. 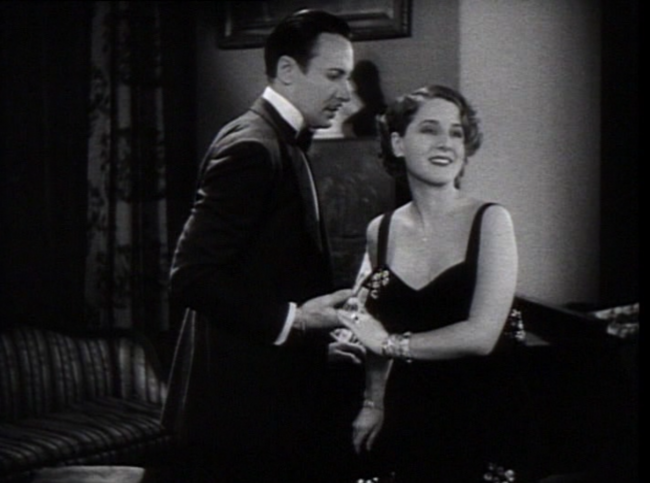 “Darling, I love you!” “Sure, Bob, whatever. Where are all the other suitors at?”

And then there’s Norma. She’s glorious here, getting to up the ante from The Divorcee in grand style and circulate between a band of desperate beaus. More than that, you can see Norma simply living in the moment of this movie, glowing with playful delight. Let Us Be Gay is clunky and a bit hackneyed by the closing credits, but as one of those classic films about elegant weekends on Long Island and an independent woman who truly feels cut from a whole cloth, this one is a gem.

Mick La Salle wrote about the transformation saying that Shearer was suggesting to all women that they could be beautiful and glamorous and that her own beauty was somewhat manufactured. Nowadays when actresses ugly themselves up, they get Oscar nominations. Back then it was viewed as Norma competing against herself, her only real competition. She had to top the last movie she did, The Divorcee. 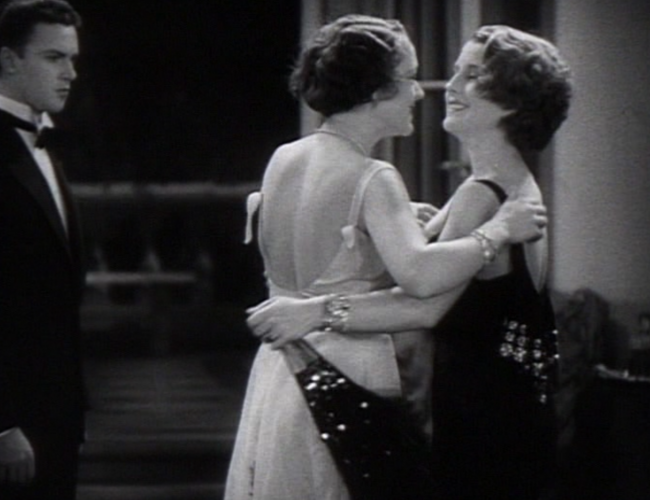 This isn’t what the title means, ladies.

Biographer Gavin Lambert wrote that the Shearer of this period had “a silky alienation that Scott Fitzgerald admired, kindred to Daisys in The Great Gatsby, her face sad and lovely with bright things in it. ” Let Us Be Gay had a shooting schedule of a mere 26 days, hurried along because Shearer was pregnant. Because her condition had become apparent during the last week of filming, Adrian draped his star with even more care than usual and Shearer was photographed behind foreground objects such as furniture and potted plants that obscured her figure. Irving Grant Thalberg, Jr. was born two weeks before the well-received New York opening of Let Us Be Gay, with Shearer fans celebrating her “double triumph.”

The ending of “Let Us Be Gay” is unfortunate. It comes abruptly, and with tears and a manner of “I won’t do it again.” It does not fit in well with what has gone before; it is not in keeping with the characterization. Kitty is one minute laughing at her former husband and the next is agreeing to start all over with him. She, the Long Island Lorelei, the young lady who had been asked by Mrs. Boucicault to rescue her granddaughter from the toils of Bob. Sic transit.

Why must pre-Codes have a happy ending? That gets to me every time. I hate it.

There’s a certain amount of masochism towards independent female characters in pre-Code films that came both from male studio heads and female audiences who ate it up. I think this movie is much more reluctant about the nutty ending than a lot of other movies that embrace it, and I kind of admire the movie for that. And while it’s a ‘happy’ ending, the male character ends up apologizing and *being wrong*, while his ex-wife is just ‘fine, I guess I really love you anyway, just don’t be a dumbass again’, which still ain’t bad.

Spot-on review. From Shearer’s transformation (I didn’t know it was her at the beginning until she changed!), to pointing out the husband’s callousness at not seeing his children (I kept wondering if they had died through most of the film). And that ending! Bleh. But I do see why you admire it.

The movie was based on a stage play by Rachel Crouthers not Rachel Carson.