Sing and Like It (1934) Review, with Nat Pendleton and Zasu Pitts 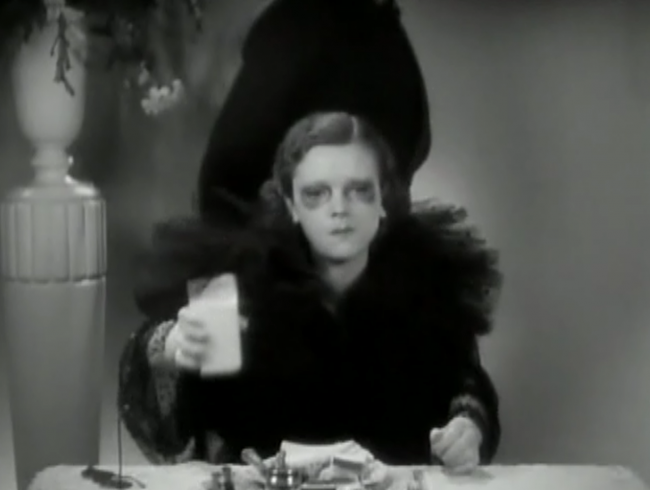 Okay, I laughed, but that’s because I’m a terrible person.

Frink: “My dear Mr. Sylvester, your insolent, boorish, vulgar suggestion that you affiliate yourself with me, Adam Frink, the artistic genius of the theater? Why, it’s ineffably preposterous. And with this, allow me to terminate the interview.”

Sylvester: “Put that in one word for me.”

Have you ever watched a farcical comedy with a huge cast of great supporting actors that let loose while the main character falls in love, learns their lesson, and discover themselves in the third act?

Sing and Like It skips the main character completely. It’s a movie entirely populated with character actors front and center, where they spend the resulting 80 minutes bickering and insulting one another at a rapid fire pace, and somehow, plumbing some humanity out of their usual one note bit parts. It’s kind of a wonder, in a weird way, like this was supposed to be Lady For a Day or Professional Sweetheart but Warren William or Ginger Rogers just didn’t bother showing up for filming.

I mention those two movies in particular as the former is a comedic send-up of gangster movies while the latter takes on show business, storylines which have both been unnaturally combined into the formula for Sing and Like It. Here, dopey gangster head Fenny Sylvester hears theater-obsessed bank teller Annie Snodgrass warble out a nostalgic tune called “Your Mother” and decides to use his money and muscle to get her onto Broadway. This involves steamrolling producer Adam Frink and sticking up a theater critic– all in a day’s work. 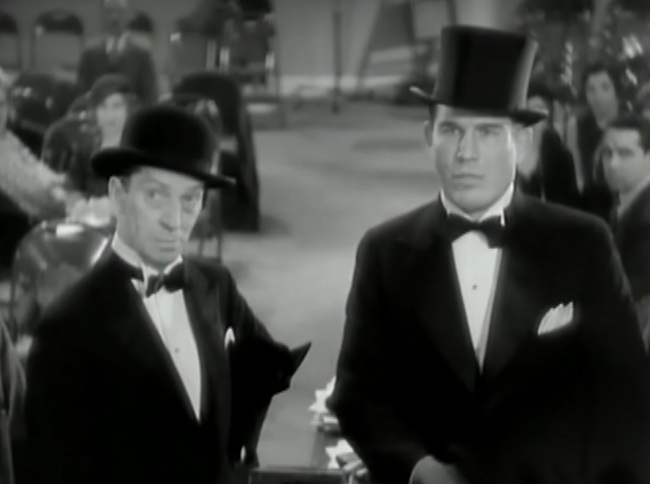 “Kid, you’re going to be big. Or someone’s legs are going to get broken.”

The fairly simple clothesline succeeds rather admirably thanks to the heavy duty cast of character actors doing their thing and the script’s eagerness to take potshots at everyone both in the criminal and artistic profession with relentless glee. Take, for example, scene stealer Pert Kelton as Ruby, who tosses off lines likes “With legs like this, I can’t help but be a great actress!” at a maximum amount of comedic blunt force, but also has a nice kiss and embrace with Fenny before he heads off for a heist. Frink spends most of his time complaining to a picture of himself that he keeps on his desk (notably, he has more than one). Even mild Oswald, who yearns for the sweet love of Annie Snodgrass, gets his moment to shine, though I won’t spoil how.

But the biggest joy may be in just how the film delights and showing how easy it is for Fenny, as a lumbering brute who succeeds through criminal determination, to push everyone around. He defeats the entire theater community by puncturing their own pomposity. For example, the movie contains perhaps one of my favorite take downs of critics, as here’s how Mr. Hancock, a taste maker of the theater scene, is introduced:

“You don’t know what an honor I consider this, Mr. Hancock. I wonder if I can ask you for a little advice. Something I can always remember. Sort of a… motto for a critic.”

“Yes, young man, I think I can. Always remember this, if you aspire to be a great critic. If ever you have anything good to say about an actor or a playwright, never say it till he’s dead. Because you cannot possibly do any good for a corpse.”

Later Hancock gets a gun in his ribs by Fenny’s gang and applauds Annie’s umpteenth rendition of “Your Mother”, making her the toast of New York. One snobby critic tilted just a bit transforms a disaster to a sensation. The creative world is controlled by taste makers, and all it takes is a push for the American public to follow blindly along, no matter how dumb the tripe. And so it goes. 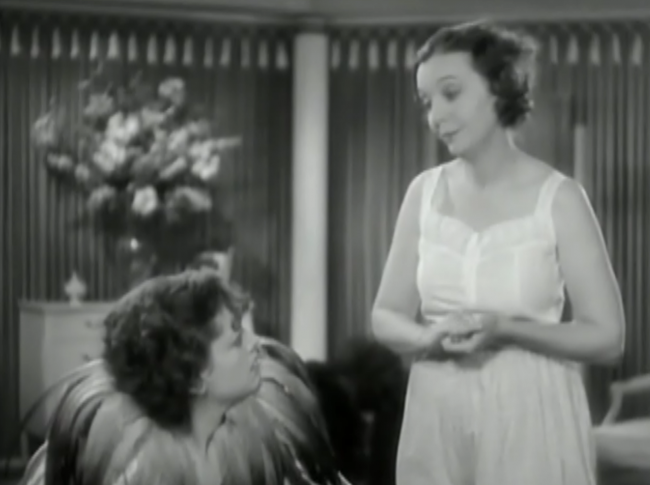 Yeah, I probably shoulda put this pic of Pitts in her naughty garments up top.

The cast is great. Horton is less fussy than usual and is fun as he tries to counter Fenny’s determination with little to no effect. Ned Sparks is reliably Ned Sparks. And Nat Pendleton is a hoot as he gangster with the mother complex; the guy could play dumb, but he does it with a remarkable amount of efficiency for the film’s rapid tempo. And Pert Kelton is a treasure in a role that could have easily had veered into bad taste on either end of the spectrum.

As for the film’s star, I always liken Pitts’ usual comedic persona as a leaf on the wind, completely lost as it flutters about and attempting anything to get grounded again. Here she’s more like a cow facing a tornado, standing firm no matter how much sense it makes to run or hide. Pitts has a great determination here, unfazed by anything, not even her own talent, or lack thereof.

Sing and Like It isn’t quite a fantastic comedy, though I can’t help but admire it for it’s rather unusual tack in not compromising any of its silly characters even for a minute and not falling back on a main romantic couple. It’s slight, but if you like any of the cast, it’s nice to see them get to shine in a bit of a different light.

If you’ve only seen an older Pert Kelton in “The Music Man” as the Widow Paroo, tossing around her lusty Irish accent while little lisping Ronny Howard spits at her, you may find her sexy, other-side-of-the-tracks routine here as quite a shock. And funny as heck.

She tosses verbal hand grenades to Zasu, but is ineffectual against the protective wall of Zasu’s own marvelous stupidity. Zasu imagines that Pert is jealous of her beauty and talent, fearful of having the gangster boyfriend lured away. Zasu is a parody of the worldly actress.

“If I were an ordinary woman, I wouldn’t come between you, but I am an actress and I must…I’ll try not to lead him so far away that he cannot find his way home. Try not to hate me too much.”

Pert sees the only way to communicate with Zasu is to join her in her fantasyland. She delivers the capitulation Zasu expects in a flat voice and a kind of sarcasm Zasu will never understand, “You’re a voluptuous siren and an artist, but deep underneath somewhere, I know there’s a good woman. Yes, Annie, I understand.”

Kelton is probably better known for her later work in movies like The Music Man (1962; as Shirley Jones’ ma) and as the original Alice Kramden of The Honeymooners (before they Red-baited her and Audrey Meadows took over the part) but she turns in some first-rate performances in many a 1930s film, notably Bed of Roses (1933), Hooray for Love (1935) and Annie Oakley (1935). (I’m more familiar with Kelton’s radio work; she was a favorite of writer Nat Hiken’s, appearing in regular roles on such programs as The Milton Berle Show and The Magnificent Montague.)

What this all boils down to is that “Sing and Like It” is a simple take on the gangster interfering in show business storyline but a comedy version with a gangster with a mother complex. It is fun but because of the constant use of Zasu Pitts squawking out “Your Mother” is a movie you have to be in the right mood for or else it becomes too painful too quickly.

SO glad you liked this film! I’m surprised, though, you didn’t give a nod to Roy D’Arcy, the “professional juvenile”; he’s so funny, refreshingly so after his other, dastardly film characterizations. (And did you catch “I played ‘Lady Windemere’s Fan”, not “I played IN…”? Things like that keep me watching this one again and again. And despite the credits, John Qualen’s character is Oswell, not Oswald; read the lips!)

Thanks! I actually had mentioned Roy D’Arcy in an earlier draft, I must have accidentally removed it. But it’s an excellent find. Thanks for sharing! Hopefully it gets out to more people!

You’re mootherrtt! I only caught part yesterday bit I’m still chuckling over some of the lined. Wonder if this inspired Mel Brooks? “Springtime for you know who”?

this movie really tickles me. I agree that one of its strengths is that there are no stars, just superbly reliable second line actors doing a wonderful job. The review that mentions Zazu Pitts doing her song “the same way every time” must be impervious to humor. A real gem!

I agree! I come back to it a lot, which I did not expect.

This just goes to show that when character actors are allowed to take over a movie it truly becomes 100% fun and hilarious ……no boring and trite romantic scenes just pure fun…. after all the character actors are truly what made the classic Hollywood films So memorable …..if there were just two stars …..the movies would be nothing but a talk show
Nat Pendleton was perfect in the lead. Pitts, Horton, Sparks and Kelton simply brilliant as they always were. Matt McHugh (Frank’s brother) Stanley Fields, Dewey Robinson and a very young Joe Sawyer make up the perfect 30’s Runyonesque gangsters. Richard Carle. An actor who deserves to be far better remembered is magnificent as the critic. Look quick for Walter Brennan as a ticket agent.
Thank goodness there were no boring “stars” engaged in the same old paint by the number romance to detract from the experts. I say. The character actors truly made the golden age of Hollywood-…. golden.