The Rich Are Always With Us: Guillotine Time

“Allison. Marriage is based on a great deal more than sex attraction. Sex attraction and sex congeniality are two entirely different things.”

How can the richest girl in the world be a complete dullard? Caroline (Chatterton) is that woman– she has more money than anyone, and she’s polite. She contributes to charity. She can’t even bring herself to hate her philandering ex-husband. She’s bloodless in the middle of an infidelity saga, just letting life happen as she stands as a bastion of purity on the sidelines. And, bless Ruth Chatterton, she can’t make a shred of this character the least bit interesting.

This is in spite of Caroline’s life not being perfect. Her long-time husband, Greg (John Miljan) still gets along with her, but his eye has wandered to Allison (Adrienne Dore), a grumpy blonde drink who wants him all to herself. Meanwhile, a freelance writer named Julian (Brent) has it bad for Chatterton, while flaky Malbro (Davis) has it all over for Julian.

We watch this love quintuple-angle unfold. The rich dress in gorgeous gowns and pout over their unrequited lusting, tossing off bon mots like, “Friendship is either too nice to be platonic or too platonic to be nice.” They rarely seem to work up the energy to follow through on any modest emotional involvement. When Caroline learns that Allison has stolen away her faithful husband, she says without a raised eyebrow, “I’m perfectly indifferent to you, Allison, as I always have been.”

The movie is a mature consideration of divorce, one where financial preparations are far more important as the emotional ones. Greg still has certain expectations for a lavish lifestyle, and Caroline grants him what she thinks he deserves– which is still quite a bit. Though they never seem to be in love, she dotes upon him like a wayward child.

Chatterton’s Caroline can’t let go of him until the plot suddenly makes it very easy for her to do so. Brent’s whiny petulance works a little too well here, making him both dashing but still annoying enough for us to understand why Caroline would keep wanting to resist his charm. The problem is that Chatterton’s eyes never leave a single doubt in the audience’s mind exactly where the film is headed.

Brent and Chatterton– I’m sorry, Julian and Caroline– fall in love and spent an intimate night together smoking cigarettes. Allison folds into finally becoming a complete cardboard stock character as she admits to a number of nasty misdeeds, with the film quickly serving up its punishment. And the wealthy endure, untainted by depth.

The film overall feels dispirited at the very least. The chemistry between Chatterton and Brent is undeniable, it just feels concluded just as it’s begun. There’s little spark of wit among the characters, most morose and keen to speak in stale platitudes. Davis, in particular, seems miscast. Her Malbro early on pesters why, exactly, Julian doesn’t love her : “Would you tire of me if I wasn’t so flip and wisecracking?”, which is five ways to awful. She has almost no vigor in the film, often consigned to being whiny until a sudden burst of life in the last act.

The Rich Are Always With Us is long-in-tooth, its material filled with more thrills elsewhere. Unlike many of its Warner Bros. contemporaries, it lacks the electricity of life to see it through. 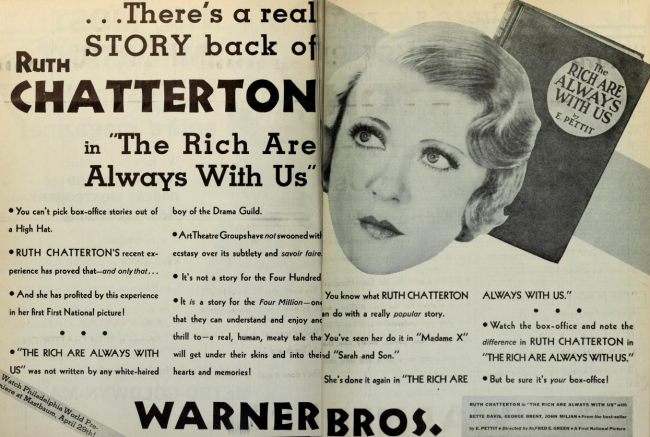 It wasn’t long before Brent received orders to visit the Chatterton bungalow. Once there, he got the once-over. “Talk about embarrassing moments!” he said. “I felt like take-me-home for $1.98. We talked a little, but to tell the truth the first thing I remember her saying is, ‘I suppose they want me to have a look at you’. I tried to be nonchalant and said, ‘Ha-ha I supposed so, too.’ The next few seconds seemed an awfully long time, but finally: ‘Well, you look all right to me!'” Chatterton approved and Brent signed a seven-year contract at $250 weekly. “I was flat broke,” said Brent. “It was a heaven-sent deal.” Brent got the jitters again when he began filming The Rich Are Always With Us. “First day on the set I spilled a cup of coffee, Ruth knocked a prop cordial into her lap, and between us we upset a glass of water. When a couple of troupers indulge in such shenanigans, there’s something unusual afoot. This time it was love. And it hit me hard. I had an idea that Ruth felt a little the same way. During the rest of the picture we were both in the clouds. It wasn’t hard to play the romantic scenes. There weren’t enough of them to suit us.”

[S]o here’s novelist Julian (George Brent) pestering newly-divorced rich socialite Ruth Chatterton into marriage. Ick! She wants to have a little fun in Paris first but secretly wants him to come out and pester her, presumably. Trouble is, Brent always presumes that is the case, in every role he’s ever played, which is why I despise him on principle–his whole attitude reflects the gateway rationalization of many a stalker. If he likes you, you’re his. Your opinion is decided for you. After all, who are you to bust up a beautiful, inevitable romance?