“Now look here, the whole pack of you. You’ve all been crazy long enough. This is the one time you can’t fly off the handle. And for once in your lives you’ve got to get hold of yourselves. You’ve got to stop screaming and you actually got to think.”

The Rimplegar family is the classic definition of the dysfunctional rich. All settled in their mansion with maids waiting on them hand and foot, each member is so engrossed with their own life drama that none ever stop to consider the bigger picture. Elizabeth (Claudette Colbert) is always trapped in a sense of existential angst. Kenneth (Wallace Ford) has let his law studies take a backseat to petty bickering with his girlfriend, Kitty (Joan Marsh). Eddie (Tom Brown) spends most of his time between parties, college, and bugging his family. Douglas (William Bakewell) is a ham actor who’s taking his sweet time transitioning to the stage. And their mother, Nellie (Mary Boland), is a bit of a ditz who loves her kids too much to stop them from chasing their hearts’ desire, no matter the financial cost.

They’re so completely disorganized and manic, that it comes as a great shock when there mother comes home and tells the kids that, due to a con artist and some bad investments, their net worth has dropped down to a solid $1.65. Family friend and physician Dr. Alan Stevens (Richard Arlen) realizes he has to talk sense into the gathered gobs– it’s time to get jobs and get to work. Or else. 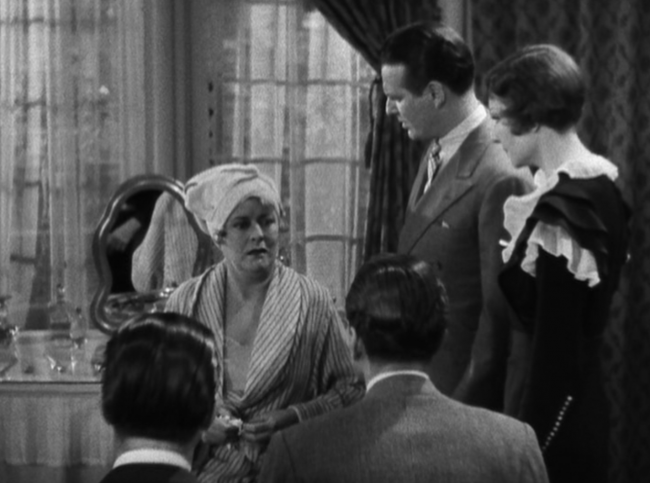 “Wait, I always thought it was ‘no money, no problems’.”

Some other reviews I’ve read noted that the opening of the film, which takes us through the frivolous lives of the Rimplegars, lasts only a few minutes, but that’s not true. Nearly 25 minutes of the movie (or 1/3rd if you’re curious) is spent with the Rimplegars doing all manner of luxurious activities, like taking separate taxis to destinations rather than just use their car. The movie wants you to see just how wasteful the family is so that it can pique the audience’s schadenfreude. Many of the excesses were probably out of the range of Depression Era audiences even before the shit hit the fan, so undoubtedly getting to watch the idle rich trip and fall flat on their faces was doubly satisfying.

Filmmakers of the 30s were also clearly abreast of the ‘having your cake and eating it too’ trend, so once the Rimplegars hit their low point, it’s time to root for them to get back on their feet. They scurry for jobs and take Dr. Stevens in as a tenant. Kenneth recommits himself to becoming a lawyer, Douglas manages to find work in a bit part, and Eddie drops out of school to work as a lifeguard for a dollar a night. Elizabeth beats the pavement until she gets a job at a shoe factory, though she loses it once she won’t give the boss what he wants to his exact specifications. 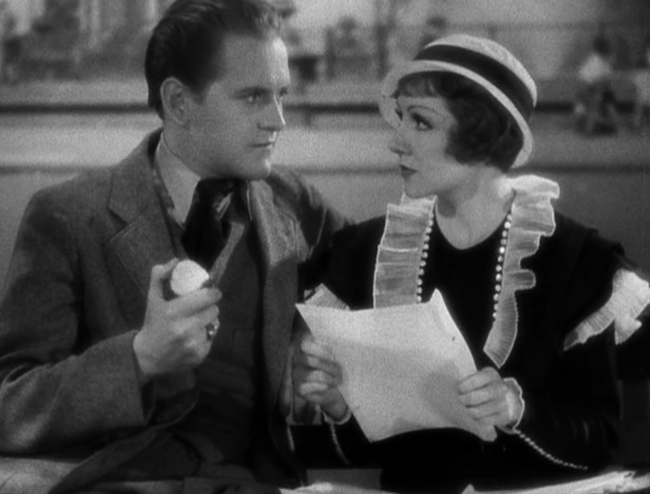 Happy-ish times for Ronald and Elizabeth.

Also living with them is Elizabeth’s fiance, Ronald (Hardie Albright). He’s the tortured artist type who can’t finish anything or help out around the house because it’s against his moral conscience as an artist to degrade himself in such a way. His utter thickness is seen as depth by both Elizabeth and Kitty. The vain Kitty decides she’s going to seduce the clueless writer out from under Elizabeth’s nose.

Ronald and Kitty serve important functions in the story as they’re both unaffected by the sudden Rumplegar financial blowout, though they should be. Impertinent Kitty is rich and stays rich and simply doesn’t understand why Kenneth’s financial misfortune should have any bearing on her social life. She delights in finding weak men who will listen to her flattery and then using their names to make herself look better in tandem. That’s why she moves onto Ronald quite quickly, as the badge of having an ‘artiste’ such as Ronald is even better to her than a well-to-do man. She can nurture Ronald’s stuffy nature, and, unlike Elizabeth, his nihilism won’t affect Kitty’s sense of self worth at all. Win-win, really. 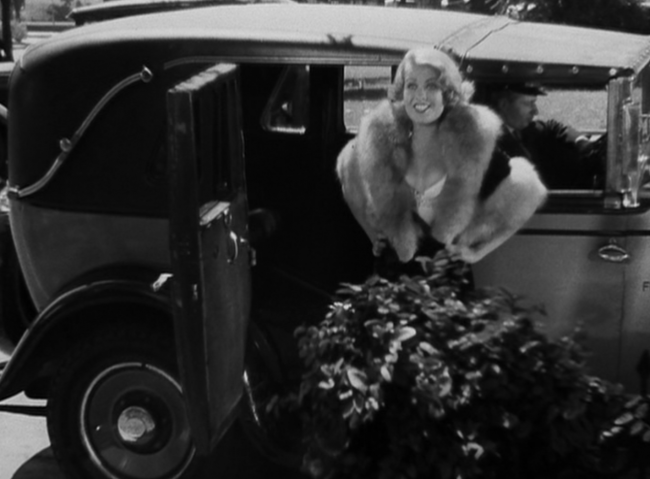 Elizabeth’s evolution is the hardest fought of the family and capably handled by Colbert, demonstrating her abilities across the spectrum. She’s both the voice of reason and the family member who has the hardest time letting go of her old privileges. When we meet her, she’s morbidly depressed, feeding off of Ronald’s negative energy. By the end she sees him for the selfish bastard he really is. The film’s assertion that a slap from Dr. Stevens has her realize her feelings for him is one of the film’s more dated touches, but it works on a metaphorical level, too. The violent jolt of reality just hadn’t hit her yet, and her life improves immeasurably once Elizabeth sees that feeding into a vain artist’s ego is nowhere near as satisfying as finding someone who truly loves her. (cough, especially if he’s a doctor, cough).

The biggest problem inherent in Three Cornered Moon is the fact that it’s not very funny. Don’t get me wrong, it’s very cute and pleasant for most of its run time, but it’s wearying in the same way a lot of lesser Preston Sturges movies are; you’ll smile at it, but you’re getting impatient waiting for a real joke to come along. Whether you come away with a good impression of the film or not comes more from how much you can empathize with the Rimplegars and their peculiarities. 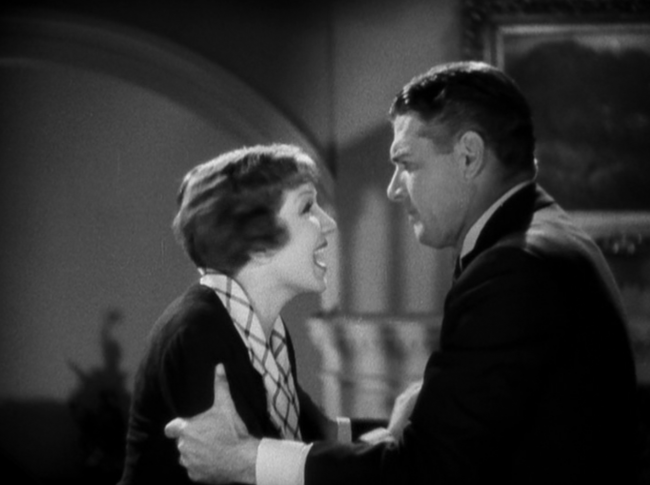 The movie works for me because it does bridge that gulf in a low key way. Under wonderful direction by Elliott Nugent, this Paramount production moves fast and looks remarkable.

Through the Rimplegars evolve and learn to appreciate the value of the dollar, it doesn’t mean they really grow up, and the cast really does get a sense of family out of the goofy group. Three Cornered Moon isn’t one of the great movies of the early 30s, but as a time capsule of comedy cinema, as well as the hopes and fears of a nation projected back at them, it’s fairly enlightening and enjoyable document.

If you ever wondered how screwball characters would fare in a Pre-Code film, here you are. It is almost predictably schizoid, incapable of maintaining the blithe tone typical of true screwball, often lapsing into melodramatic hysteria. […]

Claudette bluffs her way into a shoe-factory job with help from a newfound friend who appears in only two scenes. She quickly falls behind her production quotas, but her supervisor will let her keep the job if she satisfies him in other ways. Like I say, Pre-Code can dress up as screwball but something will always show through a hole in the garment.

There are many other such crazy ideas that run through the film, which has more than its quota of madcap flurries.

Miss Boland is capital as Mrs. Rimplegar. Miss Colbert is alert and able as Elizabeth. Hardie Albright does exceedingly well as the temperamental and dreamy author. Richard Arlen, apparently the only sane person in the group, gives a creditable performance as Dr. Stevens.