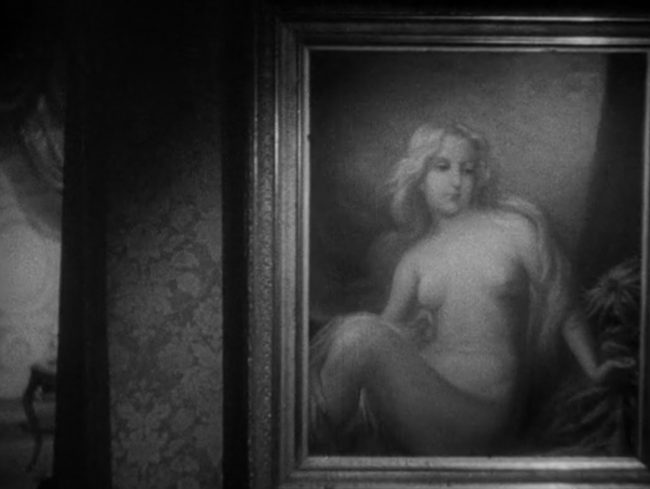 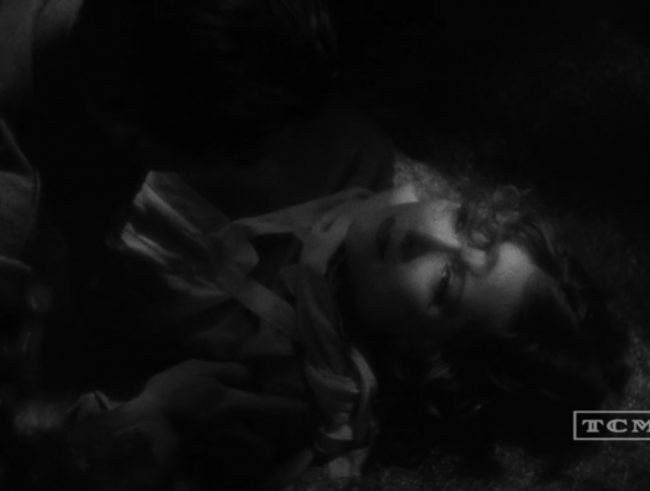 A Farewell to Arms: Love in the Time of War

“There’s a war on. Tonight who cares, and tomorrow who knows.”

It devastates them. You see lots of love affairs in movies. Some bubbly with a hint of Lubitsch, some romantically tragic like we’re crossing the sea along with the cast of One Way Passage, and many are just… well, we’re happy it works out for them.

The love affair at the heart of A Farewell to Arms devastates both of its characters. In a war that’s focused on cleaving, on separating the strength and unity of nations (think the line, think the fronts, think the social mores), this couple fights to stay whole. And just like the nation they are aiding in an ugly war, they are too forced into chaos and pain, witnessing a great unraveling as hope becomes scarce. 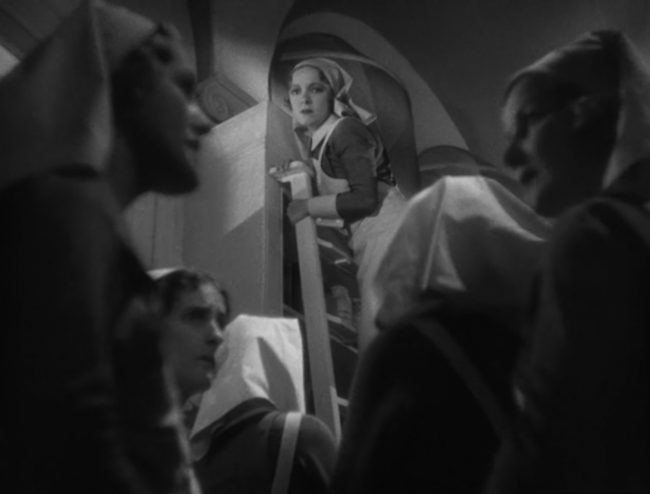 Let’s jump into the story so my poetic waxing doesn’t completely drive you away. American ambulance driver Frederic (Cooper) has made his way to the Italian army to help tend to the casualties in The Great War. On one trip back from the front, he and his drinking buddy, the Italian surgeon Renaldi (Menjou), meet up with a pair of army nurses for some good times. One of them is Catherine (Hayes), a hard boiled but compassionate nurse who catches both of their attention.

It’s Frederic who connects and Catherine opens up to him. His clumsy charm leads him to seducing her against her better judgement, and the two begin a tryst under the noses of their superiors. Renaldi finds out and disgustedly tries to separate them, at least until a leg wound sends Frederic back into Catherine’s arms. 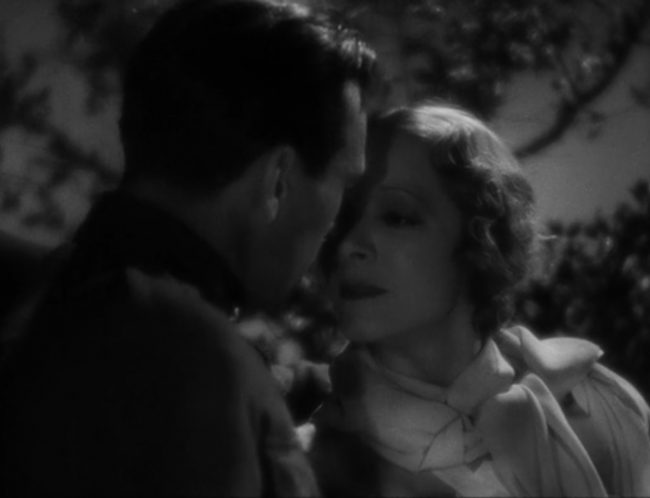 The war comes calling again, but it’s lost all meaning to Frederic, who desserts when all of his letters return unanswered. Catherine is hiding in Switzerland awaiting the birth of her child until her letters, too, are returned unanswered, done so at the hand of a bitter Renaldi. Catherine becomes sick with grief thinking Frederic is dead, while Frederic travels up war-torn Italy evading patrols, trying to find her.

This is the nuts and bolts of the movie, boiled down to comprehension, but director Frank Borzage imbues so much of it with a grinding sense of tragedy that a summary can’t do it justice. Take the scene where Frederic and his ambulance corps buddies are waiting to see how the battle is going outside their bunker door. They watch men march by, off to die, and then pause to listen to the bombs drop, each trying to guess the exact makes and models. Or the scene where Catherine and her friend are listening to a singer and she jabs her friend for applauding– “Don’t encourage him,” she hisses. 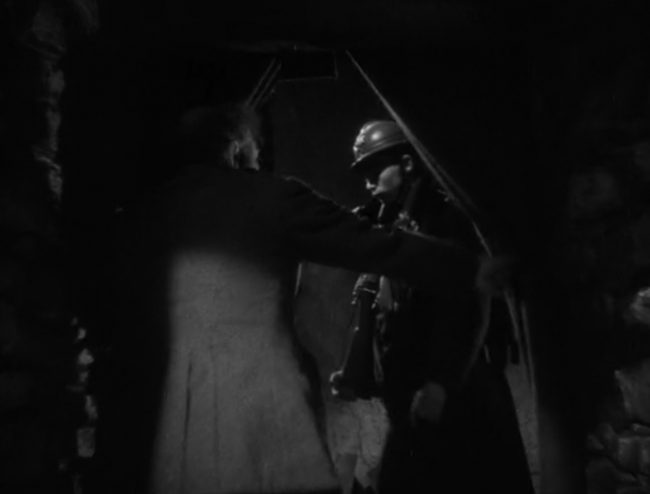 The melancholy throughout A Farewell to Arms is strong, as Catherine is wary of romance. Her first love died in the war, and she’d joined the army in hopes of seeing him come to her. Instead, he was killed far away, and she was left with nothing. She muses ruefully, “If I had it to do over again, I’d marry him… or anything.”

Catherine has been totally boxed in by society’s rigid rules, one the army enforces crudely and with prejudice. The character of the priest (Jack LaRue; yes, I thought that was funny too) is central to the film, a sympathetic commentator on the bloody madness of the whole thing. He performs a quiet, pathetic wedding ceremony for the couple– notably, one they didn’t ask for but are thrilled by. “At least I was wearing white,” grins Catherine in her nurse’s uniform. These grim jokes about what was normal keeps the couple tied to the present, to the war they dance around. 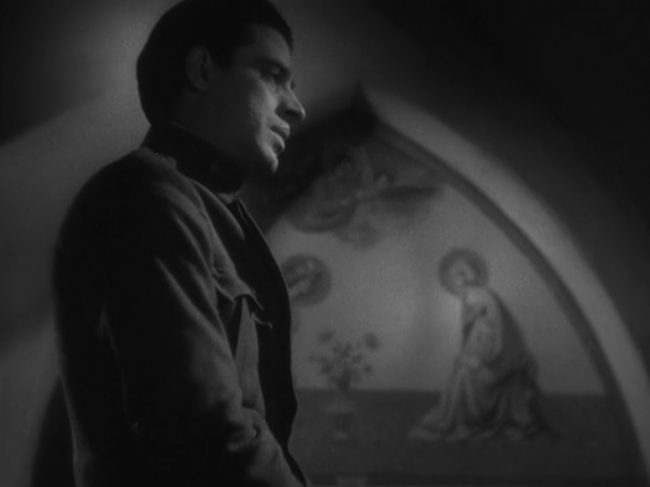 The thing that killed me about A Farewell to Arms is how Cooper breaks down, just utterly falls apart at the possibility of Catherine’s death. Cooper, usually so stoic and collected, becomes gaunt, his eyes wide and his hair a mess. This sort of unraveling is rare for him, and equally met by how Hayes tries to approach her death with romantic nobility before she breaks down, begging to live. .

Her will crumbles, wrecked like the war has wrecked everything else. The armistice bells ring and Catherine is dead. Doves flutter, Frederic sweeps her into his arms, and all is gone. It’s melodramatic, over the top, and deserved. 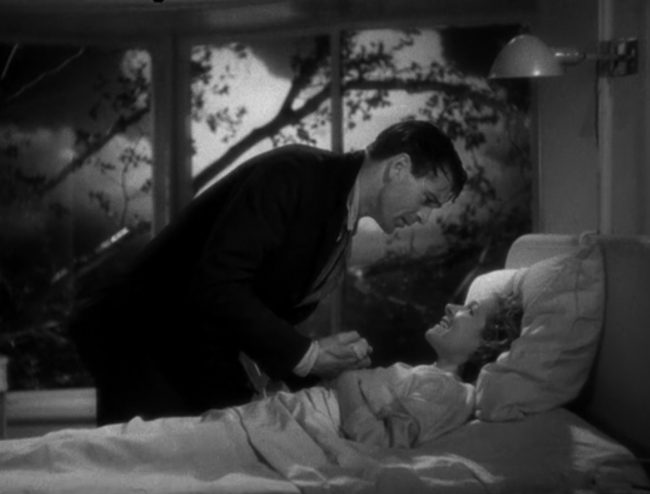 There are many movies about doomed, tragic love (many of which I seem to watch for this very site), but few of them are as evocative as A Farewell to Arms. Stellar turns from Cooper and Hayes give this one a powerful dose of spirit, and Borzage brings us in close the the characters to show how war so effortlessly perverts normalcy. But for a movie so focused on devastation, it’s still warm and human. And so the world goes on.

When the film shipped out in 1932, theater owners were given the choice of two different endings–a bleak, true-to-the-novel denouement, and a soft-peddled, more ambiguously optimistic finale. They were told to pick whichever one would suit the tastes of their local audiences, and Hemingway–as you might imagine–wasn’t pleased by this deference to the whims of bean-counting box office managers. Nor was he happy with the way the film needlessly alters events and downplays the wartime cynicism of the novel in favor of sweeping, melodramatic romance. The book, as usual, is better– Hemingway’s authorial complaints are certainly valid–but taken as its own entity, Borzage’s A Farewell to Arms is a wonderful early talkie, with brooding cinematography and affecting performances by its two leads, Gary Cooper and Helen Hayes.

It is Mr. Borzage rather than Mr. Hemingway who prevails in this film and the incidents frequently are unfurled in a jerky fashion. To be true it was an extremely difficult task to tackle, a rather hopeless one in fact, considering that the story is told in the first person.

3 Replies to “A Farewell to Arms (1932) Review, with Gary Cooper and Helen Hayes”