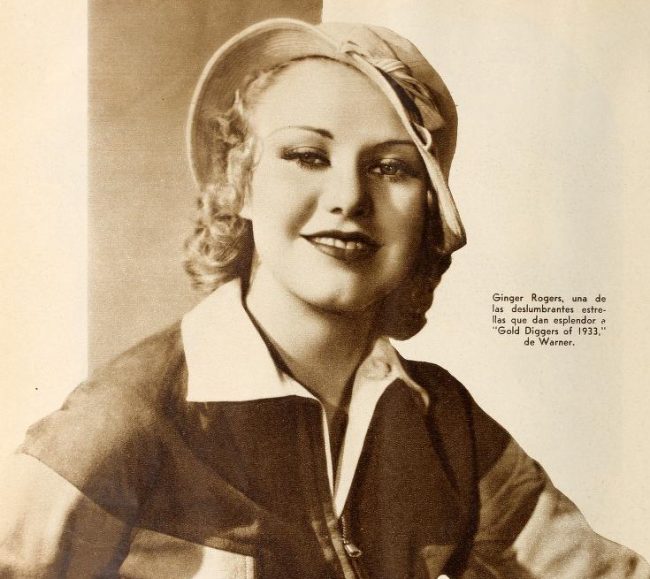 Ginger Rogers, born Virginia Katherine McMath in 1911, gained fame on Broadway in a play entitled Girl Crazy after hoofing it on vaudeville for a number of years. After a short contract at Paramount, she moved to Warner Bros. Her supporting role in 42nd Street– which was a jaunty combination of witty and profane– gave her a big boost, and soon she became a staple at RKO, working in a number of comedies and dramas. In 1933, she was teamed up with dancer Fred Astaire in supporting roles in one of RKOs biggest productions of the year, Flying Down to Rio. They were then paired for the lavish The Gay Divorcee in 1934, and the rest, as they say, is history. The team would make 10 pictures together, among them hits like Swing Time and Top Hat which to this day continue to define to many people what a classic Hollywood film was.

After the popularity of the Astaire and Rogers musicals began to wane, Rogers moved on to a mixture of dramatic and comedic roles. Starting in the late 30s, she appeared in a number of fantastic screwball comedies such as Vivacious Lady, Bachelor Mother, and The Major and the Minor. She won Best Actress in 1940 for Kitty Foyle, and she was one of the most popular stars of the decade. She reunited with Astaire one last time in 1949 for The Barkley of Broadways, their last screen pairing. Rogers would move to television and back to the stage as the 50s wore on, eventually becoming one of the preeminent nostalgia symbols for old Hollywood at the Oscars and in interviews. She passed away from a heart attack in 1994.

An interview with Rogers from 1968:

A late night interview between Rogers and Joan Rivers:

Rogers talking to Katie Couric about her autobiography in 1991: