Fog Over Frisco (1934) Review, with Bette Davis and Margaret Lindsey 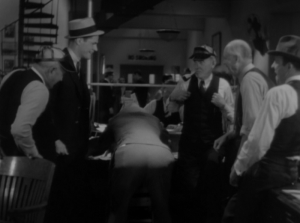 Fog Over Frisco: Death in the Shadows

An important part of enjoying a murder mystery is knowing who holds what cards. Like in a poker game, as a mystery unravels, a detective must take the cards given to him and use that to make a satisfying solution to a case. Sometimes the audience is dealt a hand, too, and given information that the detective doesn’t know or even a few of the shadier characters are ignorant of. Fog Over Frisco takes this classic mystery idea and plays 52 pickup instead. It’s a frantic clash of classes and crooks that squeezes in twists so fast it may be easy to simply miss a few. 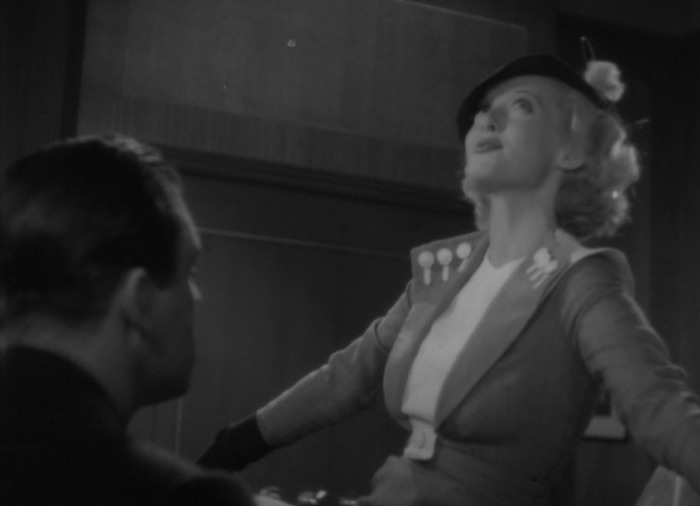 Stuck on the outskirts of the chaos is Arlene’s wealthy father (Byron), stepsister Val (Lindsay), and a reporter, Tony (Woods). The plot crosses across every strata of San Francisco society, from the rich and powerful to the seedy club owners to the newsmen and the police. Each character takes a turn being torn between their duty to an institution, whether their financial firms or their newspaper, and their relationships. The answer is never easy, and mistakes are made that cost people their lives.

Davis is rarely sexier or nastier than she is in Fog. Her Arlene is completely amoral, a creature who gets an erotic thrill from thieving. Watch the scene between Talbot and Davis in the office, where Arlene gives Spencer a lengthy, passionate kiss that lasts far more than the three seconds the Code would mandate in just a month. She gets a thrill from the manipulation, and the motivation for Talbot’s character for their engagement is purely carnal. Arlene is a classic femme fatale, a woman who uses everything at her disposal in service of her own more or less nefarious goals. 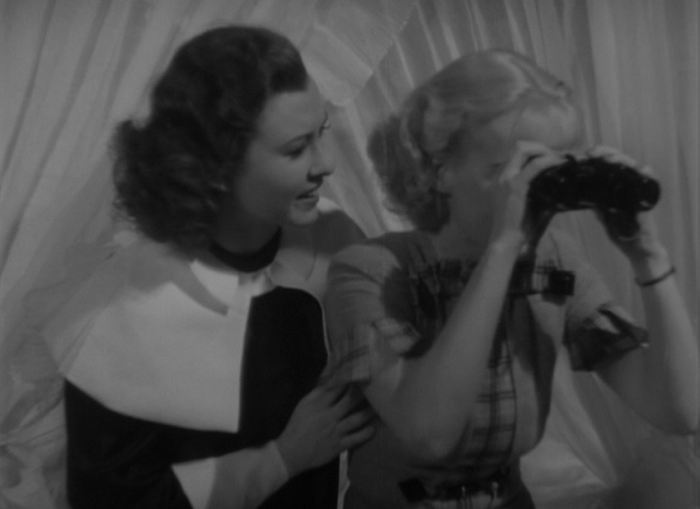 A few reviews have called out Hugh Herbert’s dopey photographer Izzy as unnecessary, but he represents an important part of the milieu of the film. His bumbling character is wholly indifferent to the suffering around him. While Tony grapples with the ethics of keeping a dead body hidden to boost circulation, Izzy is completely laissez faire. If Tony is the heart and soul of journalism, always fighting between what is right and what will sell, then Izzy is its nasty, dumb underbelly, the callous pervert who takes pictures of a dead body and is so happy for the exclusive, declares them the best pair of legs he’s seen all week. At the end of the film, with one man shot, another dead, and a kidnapping victim barely returned in one piece, his first instinct is to ask for the reward money. He’s not the comic relief– he’s the ugly truth.

The rest of the cast is filled to the brim with character actors, with each getting their turn to chew on the scenery and play their part in the drama. Margaret Lindsey probably makes the biggest impression as the fresh faced and loyal Val, who’s either too kind hearted or too dumb to pick up just how Arlene’s carefree nature masks a nasty little egotist. She’s so sweet and kind, it’s impossible not to root for her, no matter how thick she has to be. 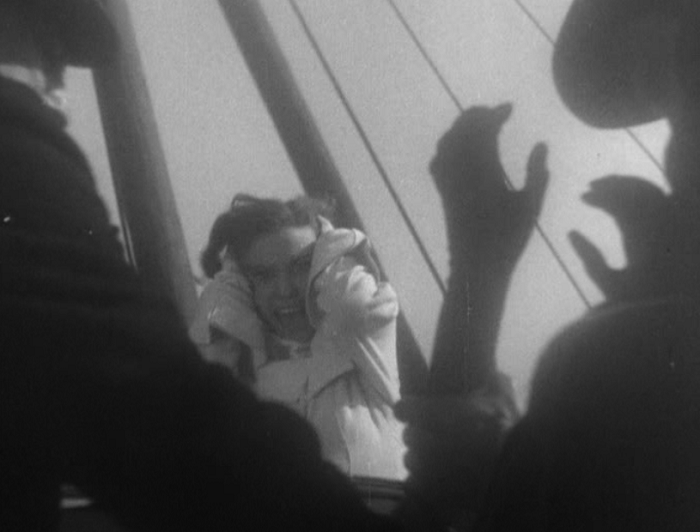 The directing of Fog Over Frisco is top notch, with shots and scenes getting shorter as the film goes on to play up the intensity. Director William Dieterle (Jewel Robbery, The Fashions of 1934) cuts between conversations between different people across different locations, instilling a sense of urgency as well as neatly laying out for the audience exactly what’s happening and how the rather large cast of characters is attempting to both deal with and undermine the tense situations that underpin Arlene’s murder. He also knows exactly the right amount of suggestion to use whenever one of the characters is found dead… which is fairly often for a 68 minute movie.

While not as archly lit as crime films a decade out would be, Dieterle still chooses his compositions wisely, baking the movie with fog and night. When it’s not dark out, though, Fog Over Frisco has a great deal of location shooting all over the city of San Francisco, from up on the hillsides to down in the docks. It’s all used for great atmospheric effect, creating a movie that looks vastly different than most other SoCal-bound films of the 1930s.

I neglected a lot of plot twists or even a spoiler section for this go around because, as elegant of a solution that Fog Over Frisco provides, the journey is certainly more than half the fun here. As a very late pre-Code with a stunner of a finale and glimpse of Bette Davis’ rising greatness, it’s definitely worth checking out.

The rooms of Bad Gal Bette Davis and Good Gal Lindsay are decorated in contrasting styles. The bad sister has Art Deco; the good sister has Contemporary Cozy. These are two styles that dominated Hollywood in the 1930’s, with Art Deco being popular in the first part of the decade, and Cozy in the second. Here they are unexpectedly co-existing in a single film, something I don’t recall much elsewhere. And they are linked to good vs. evil, too. They also might be linked to sophistication vs. naiveté: Bette is totally knowing, while her sister Margaret Lindsay is utterly naive, gullible and girlish. Her room looks “traditionally feminine”, with flounces and frills. 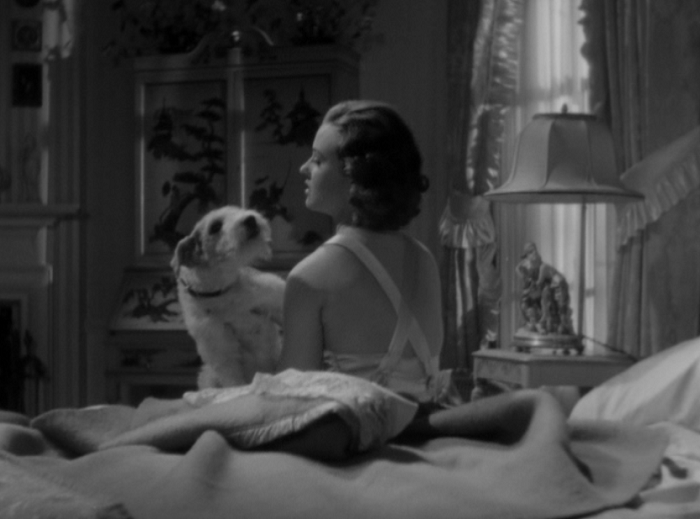 Cute pre-Code dog watch: Val has a cute wire haired terrier. And, yes, that’s Skippy, most famous for his part in The Thin Man.

Fog Over Frisco is often cited for the exciting pacing of its final reels. Director Dieterle simply applies some of the thriller stylistics developed by Fritz Lang but little used in American movies. As the cops go into action, events are telescoped closer together by overlapping dialogue from one scene onto the next. The words of a detective in a remote location are “answered” by a telephone operator, as if they were aware of each other. Once the car chase gets in motion, nothing is allowed to slow it down. Dieterle cuts away from the aftermath of a collision to action happening elsewhere, letting us simply assume that the people in the cars found a way to continue the chase. The pace is also heightened by allowing significant events to occur off-screen, including several deaths. We discover that one important character has committed suicide, but the story barely pauses to reflect on the event. More happens in Fog Over Frisco than in many thrillers twice as long.

I like, too. What’s not to like about Warners pre-code product? Lyle Talbot + Platinum Bette + Margaret Lindsey = fast and fun.

It’s really an effective flick, for sure. And it’s nice that Bette gets to play someone with an edge in this one– too often in the early 30s she was wedged into the beautiful ingenue role, which was just wrong.

It’s a long time since I saw this one, but I remember enjoying Davis’ performance and being amazed at some of the antics of the journalists. Great piece, as ever.

Thanks Judy. It’s fun, and I like the way the movie pokes at ethical questions throughout– it wouldn’t have been as much fun if everything was cut and dry.