“We didn’t lie to you, folks. We told you we had living, breathing monstrosities.”

The first time I saw Freaks was a dark night about 15 years ago in Columbia, Missouri. I was a member of a cult movie club that found an empty common room every few weeks and blasted the obscurer stuff– your Thrillers, your Evil Deads, etc.. I never made any friends out of it– I was too shy to actually talk to anyone else at the time, usually hanging around like a lost puppy. One night they showed Freaks; I wasn’t sure what I was going to make out of it. I guess I was worried it was going to be at the Herschell Gordon Lewis-level of campy grossness; instead I walked across the empty, dark campus after the showing chilled to my bone. 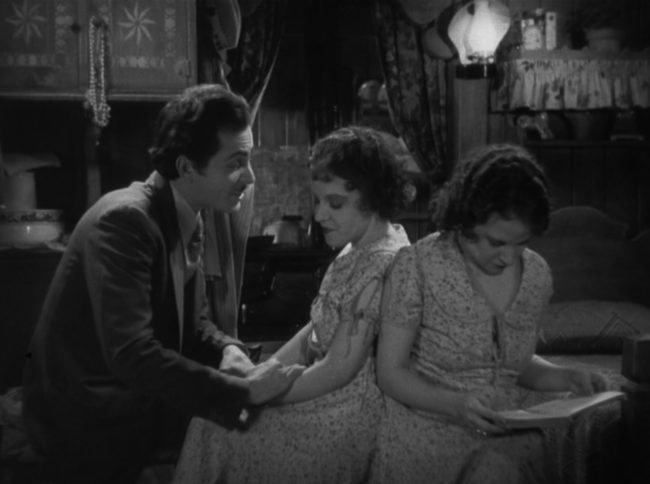 Filmed by Tod Browning at Metro-Goldwyn-Mayer with the full resources of the Hollywood’s grandest studio behind it, Freaks is undeniably unique. Even its closest kin, MGM’s other early-talkie horror Kongo, at least has a veneer of artificiality to smooth its brutality. Freaks is sometimes awkward and too often heartfelt, with haphazard acting and a plot that feels naturalistic leaving a movie that blurs the lines between old Hollywood glamour and something more nightmarish.

The plot: a dwarf named Hans (Harry Earles) falls in love with the circus beauty Cleopatra (Baclanova). His fiance, Frida (Harry’s sister, Daisy), is distressed, especially as it becomes obvious that Cleopatra is seducing Hans for his money while shacking up with strongman Hercules (Vict0r). Cleopatra’s cruelty extends further– after she marries Hans, she begins to poison him so that she doesn’t have to wait much longer for his millions. 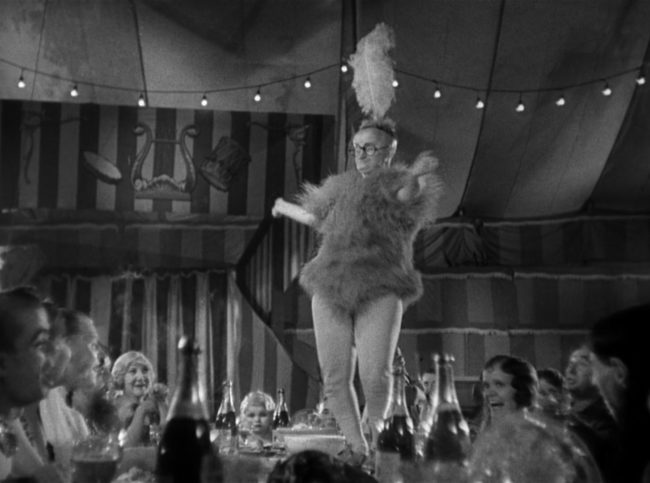 Against this backdrop is the life of the circus folk. Phroso the clown (Ford) provides a number of light moments as the “normal” audience surrogate. Leila Hyams is Venus, who seems to be some sort of circus groupie, which is not something I want to dwell on too much. Then there are the sideshow freaks: the bearded lady (Olga Roderick), the half man/half woman (Josephine Joseph), the man with no legs (Johnny Eck), the Siamese twins (Violet and Daisy Hilton), the pinheads (Elvira and Jenny Lee Snow, Schlitze), and more. They all get along, not without trouble, but happily until Cleopatra’s plot is revealed. That’s when hell breaks loose.

Okay, let’s get this out of the way quick, because if you’ve read literally any of the hundreds of reviews of Freaks, you pretty much have the same idea: in this film’s world, it is Hercules and Cleopatra, pinnacles of masculinity and femininity (again, in this film’s world), that are the true freaks of the title. They exploit and belittle and share no thread of humanity; their physical gifts are all that matter to them other than the single-minded acquisition of wealth and an easy way of life.

Their villainy is transparent. When Cleopatra is told with gusto at her wedding feast by the assembled circus clan that she is, “gooble gobble one of us”, Olga Baclanova manages one of the great repulsed looks in all of cinema, a sneer and urge to vomit colliding within a stiff, horrified body. She reclaims herself from being a physical deformity by not only expelling the others from her wedding dinner but by placing her poisoned dwarf husband on her shoulders and galloping around like a horse, laughing wildly. I’m sorry for all the italics, but it is amazing. 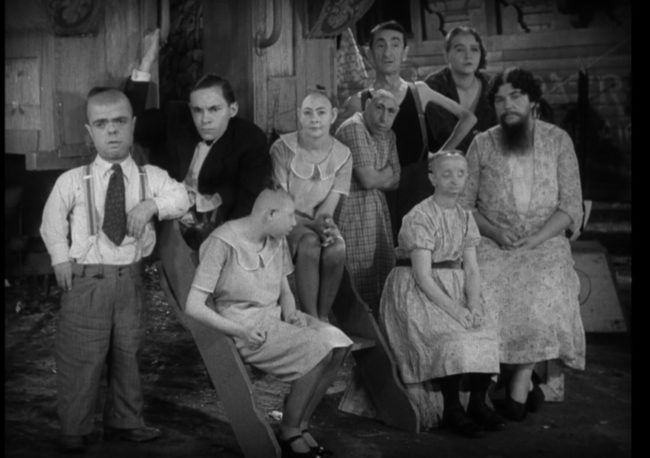 So of course Cleo and Hercules are freaks; they’re practically avatars embodying every finer point of congratulatory narcissism. But that discounts the film’s famous ending, the vengeance of the circus freaks where they revenge themselves upon Cleo and Hercules during a thundering storm. Here the sideshow ‘freaks’ come together, slinking through the rain, knives in hand, as the bright flashes of lightning illuminate them against the mud.

As I watched this again for the first time in ages, I tried to weigh my previous experience watching the film and my current feelings. In the intervening years, I’ve grown. On top of that, in the modern Discovery Channel and TLC era, one that thrives off of exploiting people’s revulsion to stuff (nothing here can match the real-life shit parade that is the “Here Comes Honey Boo Boo” mega-franchise), Freaks seems even more like an antique. Nowadays, the movie that was banned in states and countries– a movie one woman tried to sue MGM for because she said that it caused her to miscarry– almost threatens to be, without any introspection, a charming oddity, one of those kitsch things like Elvis or “I Love Lucy”. 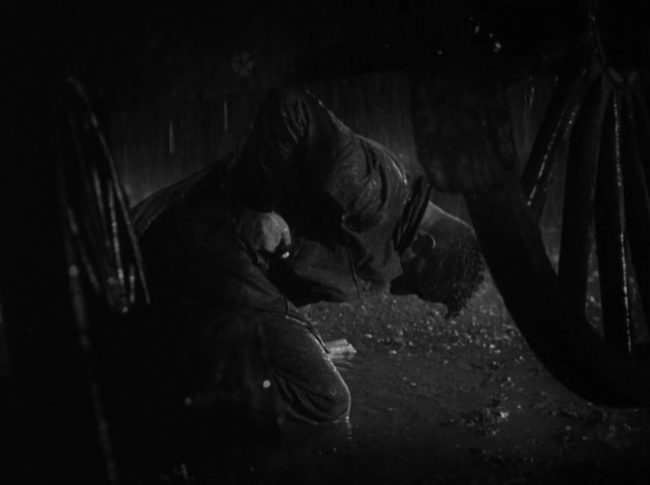 Much of this may be because of how streamlined and threat-free modern life can feel for people of a certain level of privilege and ironic detachment. When I watched it so many years ago, it felt more like an ablest porno– a ‘there but for the grace of God I go’ sort of film, where I was left actually worried that I’d become Hercules or Cleopatra, felled by my own amoral hubris and turned into a freak. Now I watch it and still find that finale terrifying, but because I know what the men and women slinking through the mud are thinking. They know the vengeance they’re carrying out is justified, it’s right, and there’s no other power that will take them seriously. All they have is violence.

For a film that constantly connects these ‘freaks’ to children, their agency is cloudy but not unclear. While a few– the pinheads especially– have a diminished mental capacity others are merely short, or have a few extra sex organs, or are simply missing a few limbs. They’re not children, but rational adults who have been constantly exploited, belittled and treated as objects of ridicule and horror for living outside the normal, through no choice of their own. The vengeance at the end then becomes cathartic for the “normal” audience’s guilt– a moment to gaze inside and look at our own ugly interiors, the little ways we treat people who are different than us, and shudder at our own hideousness. For those of us who dare.

Several reviews I’ve read complained about the final reveal of Cleopatra’s fate, either finding it funny or too implausible. Personally, I’ve always found it chilling. Of course it’s implausible, of course it makes no sense, that’s what makes it frightening. If you try to wrap your head around it, how they did it, why they did it, it makes no sense to a rational mind. For a film with an easy naturalism, it’s something else that pushes you towards the unfamiliar, something else still human but in a new and undefinable form. 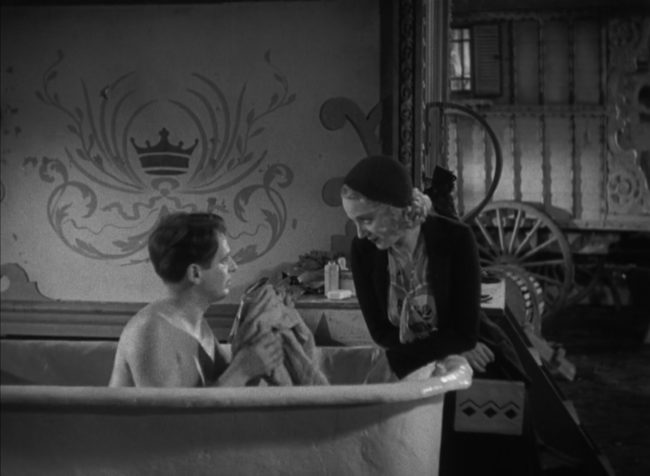 Freaks may be the most natural depiction of behind-the-scenes circus life put to film. There’s no romanticizing the profession, no lionization or pageantry. Phroso’s wall is covered with pictures of coy looking woman. People talk about the places they’ve been and the minor hiccups they’ve experienced. One of the Siamese twins gets married, and her husband is in for a rude shock when her sister announces her engagement as well. It’s weirdly sweet, a combination of dirty eyebrow waggling and sincere smiles.

So many films, TV shows, and other media seem to sweep the sideshow freaks under the rug, as the last century has tried to make the circus ‘fun for all ages’. And with the continued demise of circuses, their history will continue to be sidelined and streamlined, turned into a fuzzy memory of the American conscious. Freaks reminds you of the darkness, the illicit thrills the venues offered, and the dirty underbelly that exploited and abused people like this. It makes you complicit in its own creepiness, and that may be why it will continue to find the right audience in the unsuspecting dark.

Much of the film’s sexual humor was stripped away in the recut version. One scene showed Roscoe (who performed as a transvestite) removing the padding from his bra as he changes costumes. Another showed a trained seal amorously following the “Seal Woman” as she makes her way to her wagon. When Hans catches Cleo kissing Hercules, she cruelly says, “Don’t worry, my little precious — there’s more than you can ever use.” […]

After the “freaks” exact their vengeance upon Cleopatra and Hercules, the film showed Phroso and Venus, now married, visiting Tetrallini’s Freaks and Music Hall (no longer a traveling circus) three years later. There, they learn that Hans and Frieda have moved to Australia, married and have had a child. While visiting their old friends, Phroso and Venus are surprised to learn that Cleopatra and Hercules now work for Mme. Tetrallini. The beautiful acrobat is now the Duck Woman, and Hercules is a soloist (singing in the high tenor of a castrato). The film was to end as Hercules begins a soft romantic song… and from across the building comes his lover’s reply, “Quack quack.”

The only thing that can be said definitely for “Freaks” is that it is not for children. Bad dreams lie that way.

Freaks is up close and personal, much more so than would be a trip to the sideshow – do sideshows still exist? Besides the gross physical deformities, some of the freaks simply look strange or exaggerated, as with the ‘skeleton man’ Peter Robinson or Koo Koo, the bird girl. But others are more familiar microencephalics (pinheads) with birth defects that are actually quite common. We’re confronted by Schlitze, a beautiful child trapped in a simple-minded existence. Schlitze is sweet, affectionate and dear. He hugs Rose Dione and laughs with joy at everything he sees. His handlers tied a bow in his hair and passed him off as female in a frock dress for practical purposes (incontinence). The best scene in the movie, and one of the most compassionate things I’ve ever seen, is the moment when Wallace Ford compliments Schlitze on her new dress. Schlitze fawns and preens and shows without a doubt that she’s completely charmed. It’s a vision of horror (humanity trapped in a flawed form) ten times more real than a movie monster, and yet met with understanding and love (Ford’s kindness). The scene may be staged but Schlitze is real. Freaks is partly a documentary.

There used to be a theory in art college that many of the professors blandly bandied about like religious dogma. It was the theory of “aesthetics only.” This theory maintained that it did not matter whether a painting was of a landscape, a penis, or non-representational. A work of art could only be judged by aesthetic criteria. […]

Another example which blows the “aesthetics only” theory out of the water would be in comparing D.W. Griffith to his one-time assistant Tod Browning. There is no doubt that, aesthetically, Griffith was a far more innovative and fluid director. However, Griffith lacked two important qualities which Browning had in spades: obsessive vision and pronounced human empathy. It is the latter of these two vivid Browning qualities that renders Griffith a grossly inferior artist when compared to the inimitable Tod Browning.

Freaks is by far one of my favorite revenge films because not only would you NEVER see a movie like this made today, but it accomplishes something that almost no other movie since ever has: it took a real life group of people who had been totally marginalized by society and made them badass motherfucking heroes. Good on Tod Browning for bravely defying convention and giving these people a voice, even if it was a voice no one wanted to hear in the 30s.