“What are you gonna do now, Shep?”

I was in my kitchen this evening, juggling mashed potatoes, roast carrots and pan-seared steak when my daughter started screaming and my wife began to curse her phone. Oddly, that was that moment where The Last Flight finally clicked for me, moving beyond joshing admiration to something familiar– that urge for freedom, to have no worries and fewer concerns. 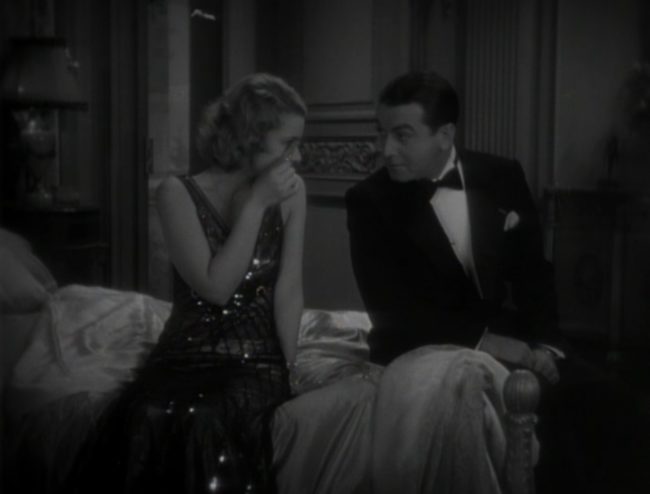 Time for some tough truth: I’ve never read Hemingway outside of the school-mandated Old Man and the Sea, and that was enough. But the Lost Generation does fascinate me. The bitter victory of World War I is often paved over in American school curriculums, and it’s an interesting moment that could have been a major turning point for our nation’s destiny– to turn our backs on the world or to embrace the infinite possibilities of global cooperation.

Unsurprisingly, we chose getting hammered– so much as we could at the time. That brings us to The Last Flight, set in Paris with a cadre of drunk American veterans desperate to forget the fact that they are somehow considered the lucky ones. After opening with a dizzying sequence depicting the brutal dog fights of the war, with Cary (Barthelmess) escaping a wreck mangled but alive, we’re taken to the VA hospital as the minutes tick down to the armistice. His closest friend is the airy Shep (Manners), who developed a facial tic from an injury which causes his eye to twitch– unless he’s drunk. That seems like a good start. 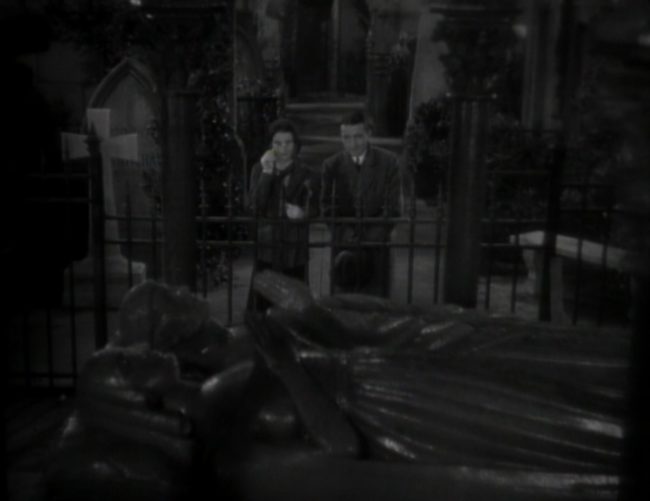 It’s 1919 in Paris, and the two men wear their evening suits out every night, pursuing their favorite drinking spots, favorite drinks, favorite bartenders, and favorite drinking buddies. These include Bill (Johnny Mack Brown), who is all brawn and not much brain, and shell shocked Francis (Elliott Nugent), who needs an alarm to remind him to perform normal bodily functions. Also lurking around is Frink (Walter Byron), a non-degenerate with a real job, who is just waiting for something valuable to turn up that he can steal.

That appears in the form of dizzy heiress Nikki (Chandler), who often toes the line between space cadet and dream girl. (Asked to characterize her, it’s noted that, “she’s the kind that sits down on phonograph records.”) She lives a life of disconnected ease mostly characterized by the number of shoes she has and the family of nameless turtles she’s raising in her hotel room’s tub. She winds up as the group’s mascot, and even begins to fall in love with the romantic, but damaged, Cary. 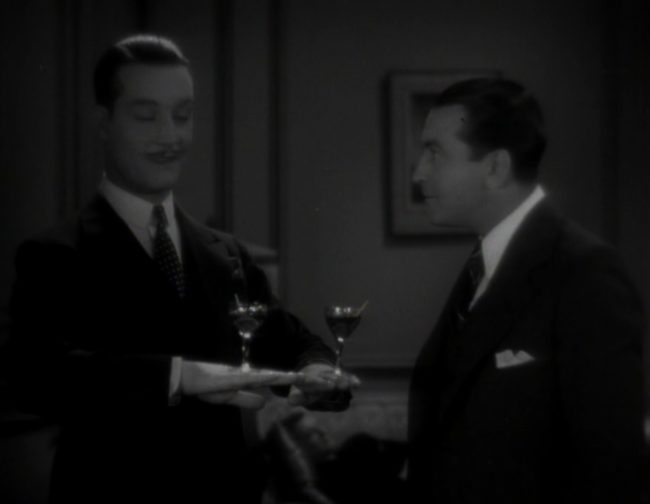 But this isn’t a movie– or an era– for optimism. The characters are wry and flippant, the typical Warner Bros. disaffected tone mixed with a special blend of knowing nihilism soaked in evening suits and cocktails. The first 40 minutes of the film, in between the blood of the battlefield and the change of locales from Paris to Lisbon, are almost aimless. While Frink is always hovering, waiting for the moment to shatter the group for his own gratification, the plot is nearly non-existent. It’s drinking and laughing, wit and half-wit freely intermixed with a feeling that it all means more than it does. Probably because nothing else matters anyway.

The film is still rough. William Dietrle (Jewel Robbery, Female), making his first English language film, is a bit graceless in parts, and Chandler’s vacant eyes make her character almost too much of a mystery. Her past is left a question mark, which gives her just as much weight as the veterans– she’s damaged, but we don’t know what did it to her. Unfortunately, Chandler is a bit too loose and flighty, making it difficult to determine when she’s drunk, or sober, or if it’s just all bats in the belfry. (ha.) One scene in particular involving the names of her turtles is extremely messy, further contributing to the film’s clumsiness. 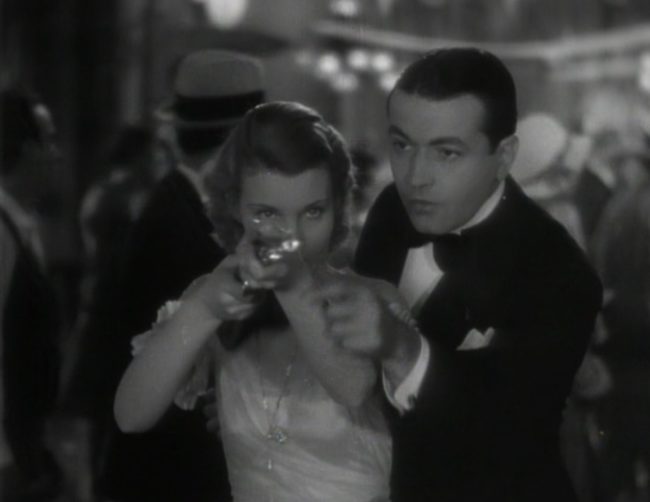 Barthelmess struggles a bit too– he’s always had a great ability to project intensity, a churning internal whirlwind that produced some of the most anguished and beautiful performances of the era. But playing witty and charming– William Powell with PTSD– is a little off for him. He does tortured well, romantic not so much. The rest of the cast is fine, with David Manners, often dragged by Universal fanboys for his performance in Dracula, playing things with a light touch under a bitter sheen.

One thing I really wanted to touch on is Frink’s role in the proceedings, especially post-scumbag Harvey Weinstein’s fall from grace. Frink is so clearly a sexual predator. The other men see right through him, and Nikki is creeped out by the man’s unwarranted advances. Why not just boot him from the group? The main problem here seems to be the effort it would take to tell Frink to fuck off. Their supreme avoidance of sobriety is matched by their desire to avoid conflict. They’ve fought their war, and Frink preys upon their drunken indifference to keep his eyes on Nikki. Their inability to confront problems eventually destroys them; that doesn’t mean they learn anything from it, either.

The film’s ending reinforces this, leaving Nikki and Cary as vagabonds forever, their buddies gone but the booze still free and available. It’s romantic but downbeat; they survive on their own terms. Had Frink been dealt with earlier in the film, pain could have been avoided. But that’s the tragedy of Cary and Shep, who saw their lives as forfeit after they crashed. Living on as ghosts, not even love can save them. 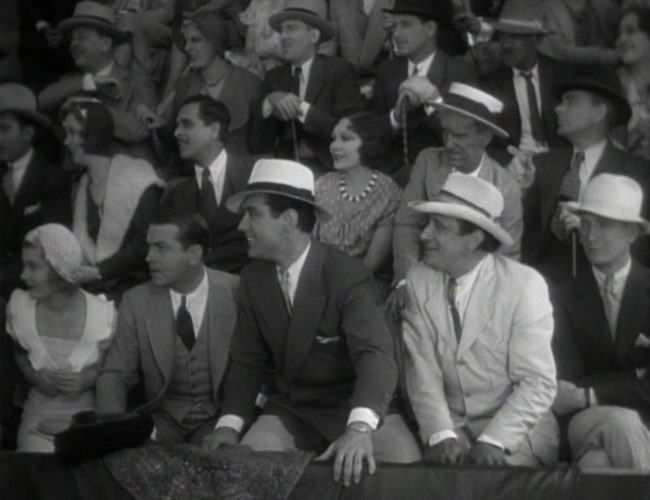 The Last Flight may be flawed, but it never backs down from the gaping pessimism that infected so many survivors of the Great War. It’s funny and irreverent, but it shows the extent to which people will go to mask their pain and embrace futility. The movie is insidious in the way it romanticizes this in part– God, I want to put on a tux and down a drink right now– but it never lets anyone off the hook, either.

That makes the film something of a rarity, one of a handful of talkies that showed what war can do to people without a hint of condescension. With a century intervening between the film’s setting and now, it’s amazing that we can still see these exact attitudes played out among the veterans of already-forgotten wars still raging. The Last Flight’s nihilism seems eternal, and, sadly, more justified than ever.

This was Dieterle’s first English-language film, but surely his experience as an actor and director for stage and screen in Germany — dating back to 1920 — had him well-prepared. Dieterle had actually been in Hollywood for a couple of years before The Last Flight, directing German-language versions of Warner Brothers films. (It was common practice in the early days of talkies for foreign-language versions of American films to be shot side by side with their counterparts.) As the 1930s wore on, Dieterle became one of Warner Brothers’ top house directors.

Originally slated to be directed by William Wellman (Variety), who had directed Wings, the honors on The Last Flight went instead to William Dieterle, in what would be his first English language film in Hollywood. Dieterle does a wonderful job of keeping our attention squarely focused upon Nikki and her war birds, only occasionally pausing to let anybody else interrupt a scene. Despite the fact that the action rarely consists of anything more than five or six people drinking and talking together, The Last Flight never feels stagey and usually even succeeds in making us believe in its European locales. The 76-minute run time feels just right and, to writer Saunders’s credit, even when nothing much is happening there’s always a bit of suspense in wondering what bit of nonsense will roll out of the characters’ mouths next. Just a guess, but possibly it helped having a director whose native language wasn’t English. I can half imagine Wellman replacing some of of the more impenetrable gems with brawnier bits of American slang, especially when the fellows were speaking.

It’s hard to imagine there was ever such a time now, a time when anti-war/pacifist isolationism was a viable Hollywood stance. But the conscience-stricken flying ace films of Saunders’ took advantage of the pre-code “amorality” to provide more than up-to-the-minute reflections of the forgotten man’s deep disillusionment over coming home to the Depression. They also eyeballed the sketchy border between war as a boy’s holiday from the Ten Commandments and the post-war (or even post-battle) isolationist post-traumatic stress. Looking back from our 21st century high, wherein hindsight has proven our involvement in WWII was a worthwhile endeavor (to liberate the camps if nothing else), Saunders’ 1930-33 films haunt the landscape like a dark shadow. No wonder they were seldom re-released and are now available only on Warner’s Archive or Amazon downloads. […]

Luckily for us there’s a weird poetry in the chemistry between Chandler and Manners, who seem even more ESP-whisp-thereal than they did in the same year’s DRACULA, no easy feat. As Shep, Barthelmess’s drinking buddy, bosom pal and ex-gunner, Manners’ otherworldly feyness finds a great natural outlet–we believe he’s forgotten what month it is–and when he dies shot in a cab and proclaims “in a way this is may be the best thing that ever happened to me,” we actually believe him.

And it’s understandable that both he and Nikki would be so drawn to the quiet strength of Barthelmess’ densely rooted pilot; they seem to float when standing still, their eyes following wisps around the room only the two of them can see, making them like a taller, drunker version of Alan Ladd and Veronica Lake, but with their invisible strings fastened to Barthelmess’s anchor, they don’t need to worry about floating away.

Though contemporary critics can be unkind to Chandler’s work in [Dracula], branding her “cold” and “bloodless,” the actress evinces a walking dream-like state that ignores the novel’s construction of a New Woman encountering the Old World to speak to a more Gothic sensibility. Though obviously tainted by the broad playing of that time, Chandler’s Mina feels experimental, almost avant garde. But perhaps she was just playing herself. […]

When The New York Times reported in January of 1940 that Helen Chandler had been committed to a sanitarium, she was all but forgotten.  While living with friends in Hollywood, she was severely burned and scarred in 1950 after having fallen asleep while smoking in bed.  She lived another 15 years, dying of heart failure in 1965, penniless and alone.  There was no obituary.  Her body was cremated in a Venice, California mortuary and to this day her ashes have never been claimed.

Barthelmess is precisely right casting for The Last Flight, his own renown headed for eclipse, but maintaining at all times a tortured integrity that serves perfectly his character here. WB brass called The Last Flight uncommercial, as it focused on flyers’ lives after they were done flying, a dismaying contrast to actionful predecessors, which by 1931 were themselves losing boxoffice altitude. The Last Flight’s minimal combat stuff dominated the trailer, making disappointment keener when the feature disposed of said highlights in its opening reel. This was drama of endless talk among the willfully dissipated, not glories won in the skies. It’s a picture better suited to us now than patrons then, being frustrating to their expectations, but congenial to our own. Modern viewers tend to like The Last Flight. It took me watching twice to catch the wave. Now it’s one of my favorite Warner precodes. Some critics then admired the experiment, but a larger public balked.