“Benny, that sock in the jaw taught me more about juries than all the law books in the world.”

“Sensationalism! Ballyhoo! Barnum and Bailey. Give ’em a three ring circus and toss in a little Houdini on the side. Give ’em a swell show and they won’t even stop to think. Yes sir, Benny, I’ve learned a lot today.”

The fact that justice is blind probably will surprise no one reading this. That this can be celebrated may pop a few monocles off.

The indifference to the moral and just is part of the great tableau of The Mouthpiece. Warren William’s first starring role and one of the many gleefully cynical lawyer pictures of the early 1930s, this one showcases some wild stunts before the inevitable downfall. William’s prosecutor-cum-defense attorney, Vince Day, is buoyed by an excellent supporting role from Aline MacMahon as Miss Hickey, his devoted secretary who knows more about her boss than he knows about himself.

Vince starts the movie sans-mustache as were he but an innocent babe. The world seems black and white until one of the men he sends to the electric chair turns out to be innocent. Realizing his own faulty sense of right and wrong led him off track, he re-calibrates, becoming a mouthpiece for the habitually criminal. The kind of lawyer who calls everyone sweetheart, even the gangsters he defends. The guy who rips off an embezzler, gets him off scot-free, and then admonishes the criminal: “You can go out and jump into the river, you cheap tin horned crook.”

The chief joys of The Mouthpiece come from its courtroom scenes. As befits its title, Day has a gift for the gab, but he has something else– pizzazz. One meeting with a hostile witness has Day mock him and then knock his lights out to prove his point. Another case sees him downing a bottle full of poison as a stunt to get his defendant off. As the jury mutters excitedly, Day leans over to the criminal and growls, “Next time, use something that tastes better.”

The lawyer here is a power broker, that monster who sees the holes in the law with ease. In one of the film’s most entertaining sequences, after he rips off that embezzler, he makes a fool of the company the man was embezzling from, too, all by ways of a quick piece of paper he’d jotted up. When the company tries to go after him, his work even has the district attorney clucking at the poor sucker for not thinking things through. The word ballyhoo is a great name for it– law is just words. Usually dull, dry words. But when you add some excitement, it makes you stand out. It can make you a star, or it can put a target on your back. Or, ideally for your piggy bank, both.

Day eventually falls for a hayseed Kentucky girl (Sidney Fox, with a pair of wide eyes that do most of the work) whose innocence makes him see that helping hardened criminals isn’t making him that much happier either. “I’m tired of crooked streets and crooked people,” he sighs as he realizes that there must be a moral to the story. He takes a few bullets in the gut to stand up for his new principles, and huddles in the back of a taxi cab, held by Hickey.

The Mouthpiece is snappy in that wonderful Warner Bros. style, a cynical movie that drowns itself in the fact that every little negotiation away from good cheats ourselves of our humanity bit by bit. Even though its moral is that kindness is essentially right and that doing the right thing might leave a bullet in your gut, it doesn’t make the nasty stuff any less fun in the process. There’s no faith in justice or nature bringing about payback– what happens happens. We must choose whether we do the generous thing on our own.

William is an invaluable asset in this type of amoral morass. He has a glint in his eye– he knows all the angles and isn’t afraid to use them. He has such a bravado about him, but there’s still so much tortured guilt and frustration constantly lurking beneath. Everything, from his attempts to drown his anger with the universe in women and showmanship to the way he coyly banters with Hickey is one long scream into the void of existence. And with what panache!

The Mouthpiece may not be the best of the lawyer pics of the early 30s, but it’s one of the most undeniably satisfying. If you never got the joy of watching Warren William before, this one is key. 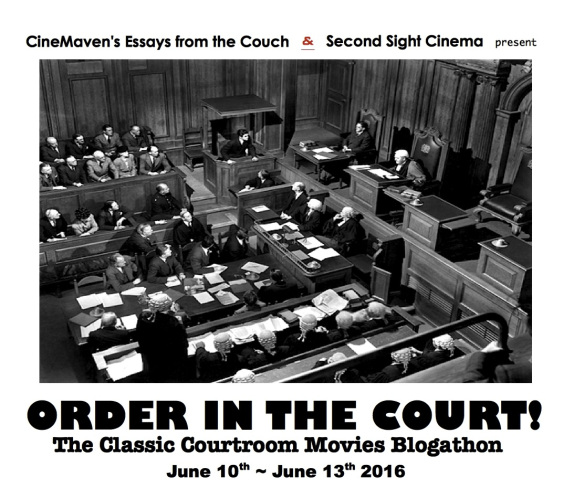 This particular role almost eluded William. The studio originally had Edward G. Robinson in mind for the picture; Robinson was just coming off the success of Little Caesar (1931), and simply had too many gigs on offer at the time. According to William’s biographer John Stageland, Warner Bros. offered the role to nearly every other actor in the Warner – First National stable before giving it to William. As Stageland notes, “The fictional Fallon combined character elements that had been so successful for [William] thus far: the powerful, amoral businessman; a bankrupt conscience; predatory sexuality and a deeply buried kernel of decency.” The Mouthpiece offered material meaty enough for any star, but William was fortunate in that the studio’s previous choices turned it down. “I just play the roles that everyone else won’t play,” William said later in a good-natured assessment of his career.

A year after publication of Gene Fowler’s 1931 biography, The Great Mouthpiece, real-life attorney William J. Fallon inspired his own mini-cycle of films. Within a span of eight months movie audiences witnessed shady yet redeemable defense attorneys played by Warren William for Warner Bros. in The Mouthpiece; Edmund Lowe for Columbia in Attorney for the Defense; John Barrymore for RKO in State’s Attorney; and, William Powell in another Warner Bros. entry, Lawyer Man. […]

“Reporters and columnists could write anything they pleased about him, as long as they got the name right,” MacDougall’s old timer said of Fallon.

This is yet another Warren William film whose backdrop of the Depression has allowed a character who is more or less a scoundrel to win us over by his sole virtue, perseverance. Crushed when life beats him down with an unexpected twist, Vince Day rises and deals out his own twists along the way. The result of the opening scene caused his initial demise, afterwards Day strives to control his own destiny. If he’s driving then he’s in control and as long as he can stay ahead of the game then there won’t be anymore unfortunate surprises. It takes sweet Celia to reel him in and show Day that there’s something admirable about doing the right thing and being a good person. His innocence may be gone, but Vince Day can still make the world a better place if he chooses too.

Mr. William is master of his role throughout all his scenes. Whether he as Vincent Day is drunk or sober, flirting with women, arguing with crooks and gunmen, or indulging in theatrical tricks before a jury, he is ever the character. He as Day begets sympathy by his good looks, his facility in speech, his courage, and his knowledge of human nature. It is really one of the outstanding interpretations that has been contributed to the screen.

It’s all worth it for a giddy stretch in the beginning where William rockets through his day, pausing to lift $10,000 fee out of an embezzler’s stash before returning what’s left to the employer on the condition he doesn’t press charges. For this one crazy stretch, The Mouthpiece is a masterwork.  It’s the role that made William a star. It will make you a fan.

5 Replies to “The Mouthpiece (1932) Review, with Warren William and Aline MacMahon”