The Unholy Three (1930) Review, with Lon Chaney and Lila Lee 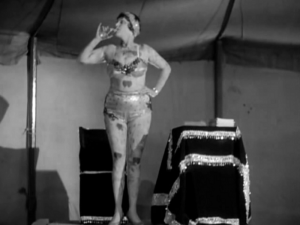 Unfortunately we are not able to pick out the picture of what surely must be my great grandfather among her drawings.

I will admit that I’m pretty sad that this is the only Lon Chaney movie I’ll ever get to cover for this site. Cheney, famous as the silent film’s ‘Man of 1,000 Faces’, only managed to make one sound film before succumbing to cancer in 1930.

The Unholy Trio is the result, a remake of a 1925 film also starring Chaney. The film’s a black comedy about a ventriloquist, a midget, and a strongman disguising themselves as pet store owners who then rob their wealthy clients. If that only seems a little crazy, the film goes an extra mile and has the trio disguise themselves as a loving family, with the ventriloquist as the grandmother and the midget as a precocious baby.

The three begin the movie in a sideshow. The ventriloquist is Professor Echo (Chaney), a sly huckster who delights in deceiving ‘the boobs’ out in the audience. The carnival is closed when Tweedledee (Earles) picks a fight with a mouthy child, and so the trio hatch their complicated scheme. Adding some spice to the matters is the beautiful pickpocket Rosie (Lee), who Echo desires but who falls for fall guy pet store employee Hector (Nugent). 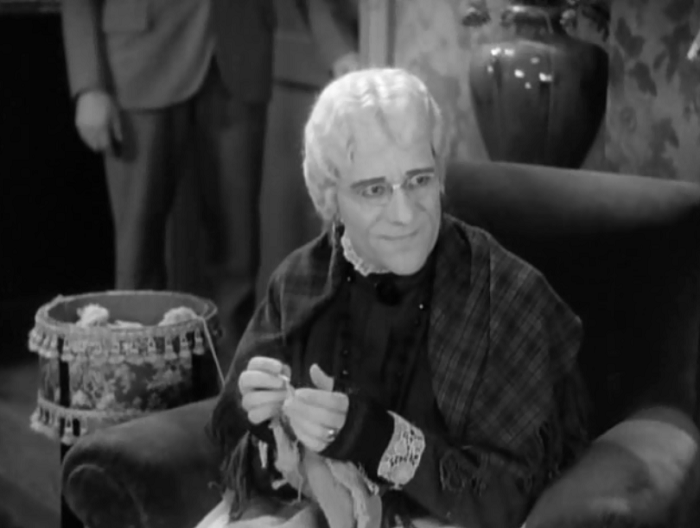 And, really, what grandmother doesn’t keep murderous apes around?

The Unholy Three manages to get a lot of mileage from its goofy premise, creating a lot of humor between Echo’s transvestism, Hector’s cluelessness, and Tweedledee’s general psychopathy. That isn’t to say that the film turns into a sitcom, though, as it plays with an undercurrent of horror as well, with the titular trio committing their crimes with a predatory, smirking glee.

Taking a look at these four outsiders, including Rosie, and it’s interesting to see how the film transforms the character’s from their sideshow origins. As they leave the sideshow and enter society, Rosie, the least odd of the group, becomes ‘normal’ the quickest. Her love of Hector’s general dopiness (and, dear god, he’s dopey) makes her realize that the scams that they’re pulling are needlessly cruel. Echo’s love of Rosie slowly transform him as well, and he eventually develops a conscience about what he’s doing. Outsiders, no matter how cruel or manipulative, can become normalized by love.

Unfortunately for Tweedledee and Hercules, they’re the outliers, both physically and morally. Rather than becoming civilized, they eagerly buy into their own cruel impulses, murdering when it suits them and eager to steal more and more. Both are eventually destroyed by becoming too wholly barbaric, which may or may not be ultimately symbolized by a giant murderous gorilla. 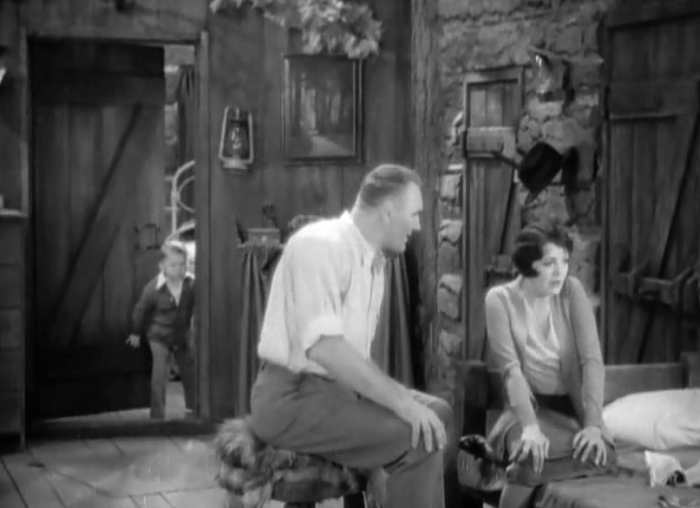 For a 1930 film, it’s almost technically flawless. The characters talk at a good clip lacking those dreaded pauses of films of that year, and while the movie rarely looks special, it lacks that claustrophobic feel that many of the films of the time were trapped in. The only real problematic area is that the sound equipment isn’t advanced enough to make Harry Earles’ squeaky voice comprehensible. I’m actually kind of okay with that too since it makes him seem like even more of an inhuman monster.

But none of this would make much of a difference without Chaney’s bravura performance, transforming his voice and his performance into a variety of ridiculous characters. It’s a performance still full of silent film ticks, but the man has such unabashed charisma and an absolutely commanding intensity. Professor Echo’s has a smile at the end of the film as he relates his credo to Rosie– “That’s all there is to life. A little laugh. A little tears.”– serves well a reminder of a man who so thoroughly captured the public’s imagination. The Unholy Three remains the perfect swan song for him. 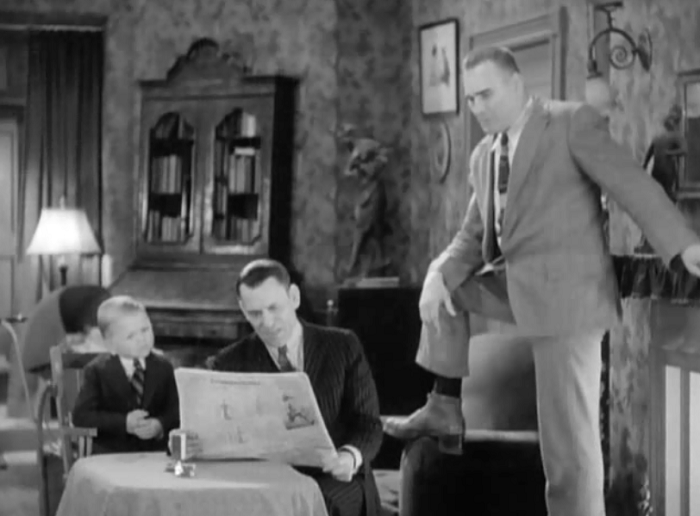 Hercules definitely has a leg up on the rest of them. (ZING) 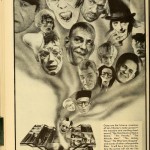 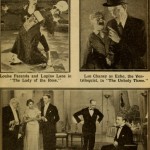 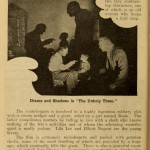 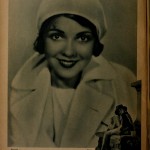 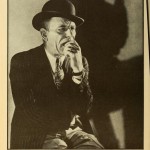 Thanks so much for the wonderful review of Chaney’s sound debut! Why do these dames always go for the dopey guy when they can have the wonderfully weird Lon Chaney?

Tell me about it! And when you’re down, Chaney can be your grandma too! He’s the whole package!

I confess, I prefer the silent version more—anything directed by Tod Browning has a weirdly watchable quality to it. The talkie version is well done but there is the great ‘What if?’ question that hangs over it, ie, what if Chaney Sr had lived, what kind of films would he have made? (and would Junior have had a chance if his old man had still been around and kicking in Hollywood?).

I tried hunting down the silent version, but ran out of time and energy before this review had to drop. I’m also not a big Browning fan which didn’t help my enthusiasm.

I know Chaney had originally been approached to play Dracula, and I can’t even imagine how that would have altered history. Chaney in White Zombie? Chaney in Frankenstein? Chaney vs. Chaney in the Black Cat?! Crazy!

Thank you, Danny, for writing about one of my favorite movies. What’s wrong with keeping a giant, murderous gorilla in the house? I find that it deters burglars, fund raisers and aluminum siding salesman.

You should go into the giant murderous gorilla business, because you make a heckuva salesman. And those would probably be great to sell door to door; just don’t hit the same house twice. 🙂

Wow, I really want to watch this and compare with the silent version. It’s not every day that you can see the original and the remake with the same actor!
Don’t forget to read my contribution to the blogathon! 🙂
Greetings!

Always love your site, and will definitely drop by later this week. 🙂

Fun review! I’m anxious to check this out, since I’ve only seen the silent version. It’s too bad this was Chaney’s first and last talkie.

There are definitely many people who prefer the silent version. I think because Chaney’s tenure in talkies is so brief, it usually gets dismissed out of hand. Either way, I really liked this version, and it’s worth tracking down.

At the risk of sounding like a dope, I had NO IDEA Chaney Sr. made a “talkie”! Then for him to die a few weeks later is really quite sad.

What’s not to love about a cross-dresser who keeps killer gorillas? And why haven’t I seen it??

Thanks for a great review. PS – I really like the look of your site.

Thanks for coming by! Even for the crazy main plot of the film, the killer gorilla seems one level crazier, and helps push everything into complete lunacy by the film’s end. It’s weird, fun stuff.

I have seen the silent but not this one. Lon is one of those I most wonder “what if” he’d lived longer, since with a movie like this he showed talents that were practically wasted in silents, like mimicry and ventriloquism…

Definitely. The dude had talent. Perhaps he could have set himself up as Charlie McCarthy and Edgar Bergen’s evil nemesis at the very least!

I love Chaney’s melodious speaking voice— I’m glad we got a chance to hear it.