Viva Villa! is nothing short of a pre-Code epic. Running nearly two full hours, it was shot on location, it has hundreds of extras, some very big stars emoting very bigly, and the fate of a country at the center of its story. And it begins with a handful of dirt– that’s the last thing that Pancho Villa’s father is grasping when the land-owning major domos evict the peons from their land and execute the only one who dares to stand up to them. Pancho takes to the hills, grows up to be a bandit (and Wallace Beery), and soon finds himself called upon to help rid the country of the Spanish-born domos and restore Mexico to its native people.

It’s 1910. There are two other figures in this revolution, the politician Madero (Walthall) and the cackling General Pascal (Schildkraut). Madero is filmed with soft light, and the film’s staging makes him out to be very much a Christ-like figure. And we all know what happens to those people. Pancho serves Madero proudly and chafes under Pascal, all while bringing the revolution much-needed victories. He’s accompanied by murder-happy Rodolfo (Carrillo) and drink-happy press agent Sykes (Erwin).

Villa’s leadership style is suspect. He usually crashes into a scene ordering people to “SHUT UP! SHUT UP!”. He has the subtlety of an ox but is humble at his own accomplishments– save when it comes time to get the senoritas to marry him. This inspires loyalty, as does his ruthlessness. He clashes with Madero in his methods, which the film’s screenwriter, Ben Hecht, uses to lay the film’s morality out:

Madero: “You’ve brought disgrace on the revolution. You made war not as a soldier, but as a bandit.”

Villa: “Oh, Mr. Madero. What difference does it make in how we win wars? If the other fella wins, why then, that’s not so good.”

Madero: “You permitted the killing of the wounded on the battlefield!”

Villa: “Mr. Madero… what are we going to do with these people? I don’t think you know much about war. You know about loving people. But you can’t win a revolution with love, you’ve got to have hate! You are the good side… I am the bad side.”

Pancho Villa has rough edges to spare, and while the movie makes him laughable and a comedian as often as not, there is serious darkness swirling underneath his buffoonish visage. He knows his blood-covered fists are the only thing that can bring reform to Mexico, but he tempers this with his love and faith in Madero. When the revolution is a success, Villa steps out of the picture. But Madero is outmatched by the old rich of Mexico and assassinated. Villa, who’d meanwhile been exiled to the US on a falsified charge, returns to lead his people into a fury once more, getting revenge on Pascal, and to finally make Mexico a real, honest democracy.

A quick side note: it bears special mention that the Fay Wray subplot is on another level. Her character, Teresa, is the sister of a revolutionary-backing major domo who sees Villa as a hero until he returns from exile and brings with him the threat of land reform. But in the spirit of pre-Code bad girls, she loves him for his brutishness and is recklessly turned on by his low-class manners. This would normally be the recipe for a humdrum love connection, but instead leads us to a scene where Teresa first shoots Pancho and then taunts him.

But it’s so fucking weird.

Now, let’s immediately take for granted that this film is 99% fiction. The Mexican Revolution this film portrays hadn’t passed the 15th anniversary of its finish when Viva Villa! was released, so it’s doubtful that the truth was paved over out of a belief in the audience’s ignorance. For a movie that very much advocates the power of the press to balance the power of countries and rewrite national narratives, it’s a film that screams loudly the believe in printing the legend over the truth.

Of course, this version of the legend does come heavily from American perceptions of Mexico, which seems to be rather timeless. Beery’s portrayal of Pancho plays into American preconceptions about Mexicans being lecherous, drunken buffoons as much as American’s own conceptions of themselves– the film’s American reporter is wry, loyal, and more than a little superior to everything that unwinds. But Beery’s take on Pancho is honest and pragmatic, and those two qualities are what make him the film’s hero in spite of his many flaws. He’s constantly evolving towards the right thing, or at least what this film sees as the right thing.

In spite of the stereotypes built into Pancho’s portrayal, Viva is a solid film. It’s a movie clearly of it’s time, so much so that it’s important to note: Viva Villa! was the highest grossing film of 1934. And this wasn’t a cheap film– three directors, footage lost, actors replaced (all this explained below in Trivia). Why did this story connect so strongly?

It promises the audience a certain amount of boisterous cheer and illicit thrills on a great scale, but that can be said about a number of its contemporaries. But, on top of that, it promises a certain degree of hope. After the social upheaval caused by the beginning of the Great Depression, the idea of a dictatorship in the United States wasn’t far from the realm of possibility. Americans saw strongmen like Mussolini as a possible cure for their societal ills, and Viva‘s Pancho is just that kind of righteous leader who would take no prisoners (and, here, literally) to unselfishly save his country from the land-grubbing, money-having jackals.

The movie shows the rise of a deified democracy soon contrived to downfall by craven elites. By film’s end, a plucky, man-of-the-earth, has returned law and order back to the people. He has united the poor (“The poor always was the beasts. Only this time they’re not frightened. Somebody else is frightened, eh?”), subdued the rich, peacefully redistributed the land, and resigned his position once he knew his orders would be respected. The Pancho Villa here is the benevolent dictator myth that got so much traction in the 1930s. It didn’t work out well, but that lesson was yet to be painfully learned.

Today, in a much different world, it’s not much of a surprise that this film creates some of the reactions it does. From its easily derided star, to the rewriting of history, to this film’s salacious back story, this movie has something to offend everyone of a modern stripe. But as long as you can accept the fact that this movie is an import from an alternate universe where Mexican stereotypes aren’t challenged and the only hope for sanity in the world is a humble man with a big stick, you’re fine. And it’s perfectly understandable if you can’t.

Historical accuracy was seldom a priority with this type of film, but producer David O. Selznick (who called Viva Villa! one of his favorite pictures) tried to balance out the theatrics with at least partial authenticity. The movie was shot mostly in Mexico, adding thousands of dollars to its budget. Some alterations to the original screenplay were also made after it was negatively assessed by both the Mexican government and Villa’s widow. Still, Wallace Beery’s performance as Villa is so extravagant, it nearly overwhelms any sense of reality. 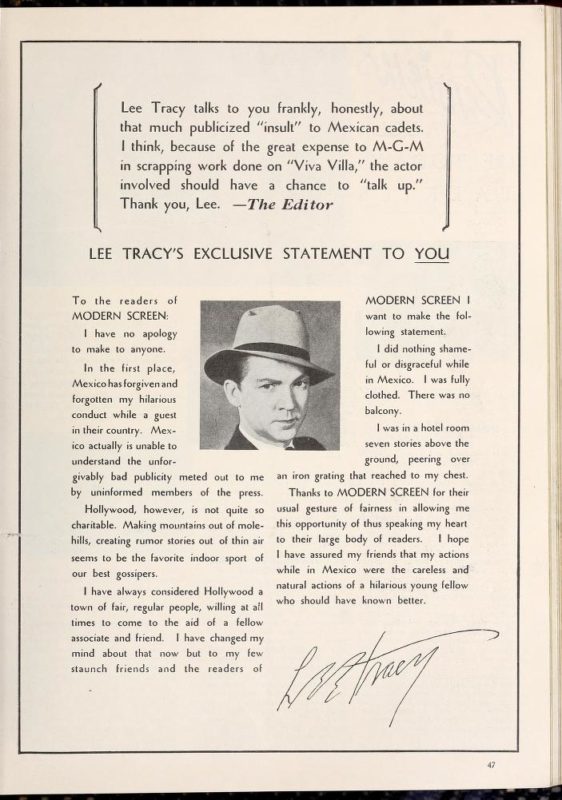 According to biographical sources, sixteen-year-old Doroteo Arango killed a man for molesting his younger sister and took refuge in the mountains, eventually changing his name to Francisco “Pancho” Villa. In 1910, while he was working as a bandit and part-time laborer, Villa was persuaded to participate in the Madero revolution against President Porfirio Diaz. After Madero became president, Villa, still a member of the irregular army, was condemned to death for insubordination by General Victoriano Huerta. Although the execution was stayed by Madero, Villa remained in prison until escaping to the United States in November 1912. After Madero was assassinated, Villa returned to Mexico and joined forces with Venustiano Carranza to defeat Huerta. Mutual distrust divided Villa and Carranza, who took over as president in 1914, and the civil war continued until late 1915. In early 1916, as a show of power, Villa executed sixteen U.S. citizens in Santa Isabel in northern Mexico and attacked Columbus, NM. Woodrow Wilson then ordered General John J. Pershing to lead an expedition into Mexico to capture Villa, but Pershing’s efforts were unsuccessful. By 1920, after years of continued armed insurgency, Villa agreed to “retire” from politics and was given a ranch in Durango. Villa was assassinated on July 20, 1923 in Parral, Chihuahua. The Hollywood Reporter review notes that the character of General Pascal was “more than a little suggestive” of Huerta.

The script does deserve credit for keeping Villa’s comment that “this is a pretty small medal to give someone who did the things that you said I did.”

The screen Villa is killed by a rich landowner seeking revenge. While Villa was assassinated near a butcher shop, the script neglects the massive paranoia that made it almost impossible to get near enough to kill him. Having made many, many enemies during the revolution, Villa’s security depended on the numerous former villistas who had settled on either his hacienda or nearby estates, while the hacienda was turned into a fortress, where the number of visitors was regulated and closely watched. Despite these considerable precautions, he never slept in the same place twice, never allowed anyone to stand next to him, and was always surrounded by fifty bodyguards.

It is for the most part a fast, furious and compelling tale, but there are a few episodes which might very well have been excluded. It is to be presumed that the producers—Metro-Goldwyn-Mayer—had insufficient confidence in Villa as he was as a big drawing card to the box office and therefore they included examples of brutality that are by no means helpful to the production. […] At the close the redoubtable idol of the peons, killer and marauder is himself sent to his death by a bullet from an avenger, but before he breathes his last he knows that Johnny Sykes is going to give him a fine send-off in his Gringo newspaper. So that’s something.